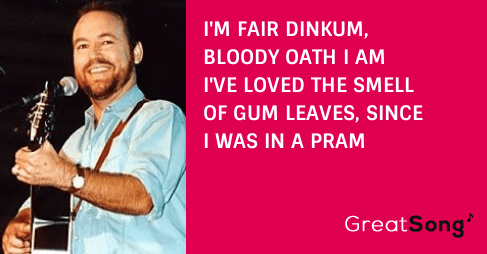 On Australia Day, An Australian Reader Writes On Patriotic Songs Vs. PC

From: Arthur Redding [Email him]

Tomorrow will be Australia Day, (January 26, the anniversary of the founding of Sydney by the First Fleet of white settlers) and though I'll have to do paid work while around 21,999,999 of my compatriots are getting totally plastered at summer barbecues, I recall in gratitude one of the few times that the Servile State was temporarily worsted by these same compatriots.

This occurred almost 30 years ago, when local guitar-strumming folkie John Williamson had a popular hit with a song called I'M FAIR DINKUM. The refrain runs:

I've loved the smell of gum-leaves since I was in a pram,

Some places might be greener, but I don't give a damn,

The whole point of the song is that in his travels the protagonist (Australian, obviously) meets a Chinese doctor, an Indian cabbie, and a Yorkshire bus-driver. All of whom deliver this hymn to the Motherland in their various accents.

Since the song was at once affectionately satirical, harmless, and genuinely patriotic, it fell foul of the New South Wales Anti-Discrimination Board, which—but of course—attempted to get it banned from Sydney's airwaves. I imagine that the Board's resident Pecksniffs felt especially disgusted by Williamson's derisive reference to Al Grassby, former federal cabinet minister, "father of multiculturalism", front man for the Calabrian Mafia, and (as practically every Australian with a double-digit IQ knew even before Grassby's death) psychopathically mendacious champion of contract killers.[Monuments to honesty and deceit, By Paul Sheehan, Sydney Morning Herald,February 16, 2009]

By some miracle, even the helots of Terra Australis—notwithstanding such handicaps as their total lack of, or indeed desire for, a First Amendment—refused to tolerate this affront to their freedom. What with the Internet's advent, anyone with a modem can hear the thing.

Williamson's Australian accent is soooooooooooo broad that ideally subtitles should have been provided, but anyway: