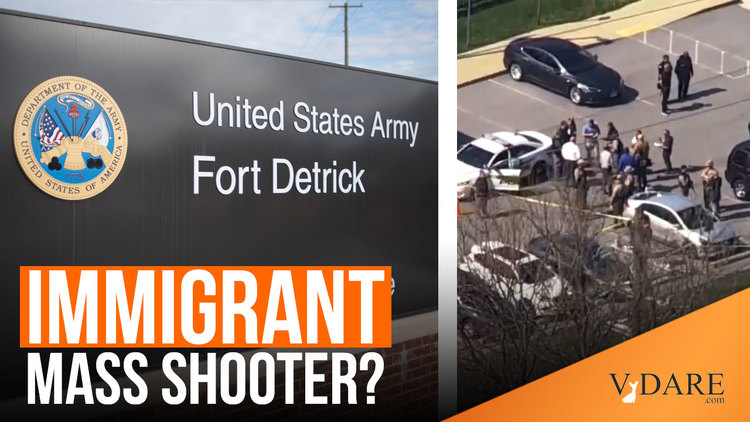 More Than One VDARE.com Reader Writes To Point Out That "Navy Corpsman" In Attempted Immigrant Mass Murder Has Ethiopian Name

From: Betsy [Email her]
I am watching the LSD trip also known as the PBS News Hour, which declined to name the medic who mowed down two victims in Maryland today.  I have been unable to find a picture, but I believe that his name (Fantahun Girma Woldesenbet) is Ethiopian.

James Fulford writes: I also received an email from a regular Texas correspondent making the same point, and pointing out that Woldesenbet is actually a fairly common name...in Ethiopia.

There's a different Fantahun Woldesenbet who's a doctor in Africa, and more than one Dr. Woldesenbet in America, displacing American medical students, but not shooting up military facilities.

I don't know what an Ethiopian was doing in the US Navy before he started shooting peoplee—presumably displacing Americans who want to serve their country. A medical corpsman does what an EMT does in civilian life, and most are unarmed, even in wartime, because of the Geneva Convention.

That may explain why Woldesenbet was displaying Ethiopian rather than American marksmanship, like Sudanese immigrant  Akouch Kashoual, a “refugee” who shot up a Nebraska cold storage warehouse in 2010, wounding three Hispanic employees, but killing no one but himself.

At the time, I noted that a combination of Sudanese marksmanship and American emergency medicine kept any of them from dying, which made Kashoual's suicide kind of pointless. If he had pleaded guilty to attempted murder and wounding, he would probably have been back on the street—the American street—by 2017.

For a more general discussion of black marksmanship, both native-born and immigrant, see The “Leaded Law” And Mass Shootings—Poor Black Marksmanship Is Saving Lives.