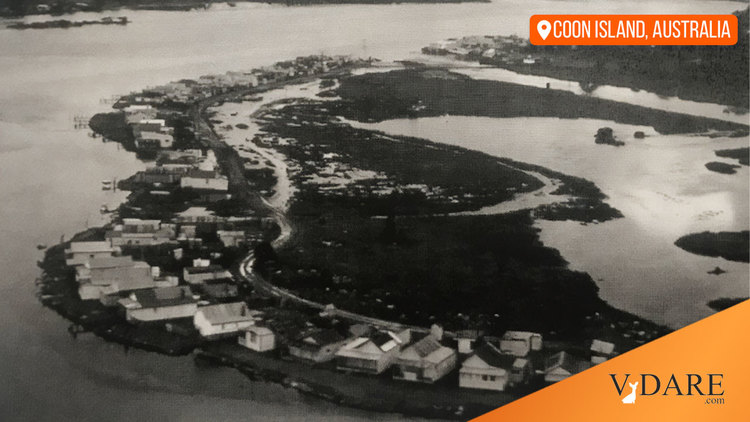 Fresh from mounting the taxidermied head of the founder (Edward William Coon) of the iconic Australian dairy product, Coon Cheese, on the trophy wall of political correctness, Australia”s woke warriors have now loaded up their name-changing automatics with fresh linguistic ammo and are off on the hunt for another “Coon”.

This time it is the suburb, Coon Island, in the Lake Macquarie local government area in regional New South Wales, which acquired its name over a century ago in honor of a local coal miner, Herbert Heaney, whose jocular nickname was “Coon” because of his coal-dust-blackened face at the end of each shift [NSW suburb, Coon Island, renamed: labelled “genuinely racist” by councillors, by  Andrew Prentice, Daily Mail Australia ,July 27, 2021].  It will receive an Indigenous name, Pirrita Island, because “Coon” is “utterly racist”, said the earnest councillor behind the motion (a white, but cucking, political “conservative”).

Over half (56%) of the suburb’s residents find this a ridiculous response to a non-issue.  Coon Island is a familiar and popular location name with an organic connection to a cherished, blue-collar working class tradition and had no racial overtones—until it was harped on by white “anti-racists” (even local aborigines say the name-change is unnecessary) for a bit of cheap virtue-signaling and political career-grooming.

Funny how such efforts “to support reconciliation, healing and acceptance within our community”, as the councillor put it, always seem to come at the expense of white Australians, causing resentment and division.

Still, onwards and upwards!  Will the next targets be the 33 Australians with the surname of Coon?  Or what about the towns of Coonamble, Coonabarabran and Coonawarra (all Aboriginal place-names, by the way)?  Who knows what will happen when the philological blood-lust of the anti-white white is up.