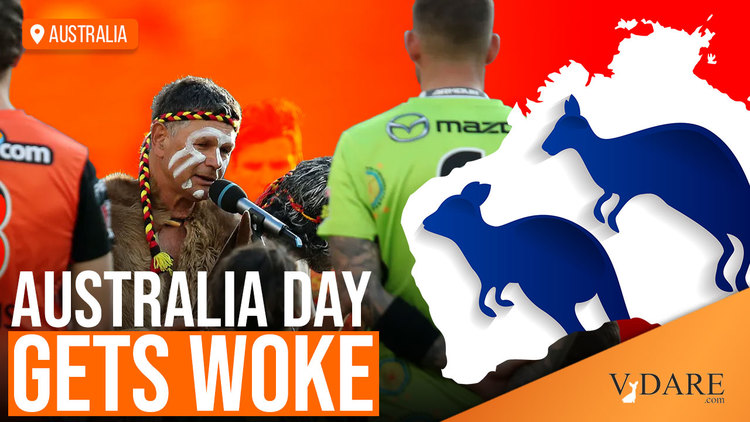 See, earlier: An Australian Reader Reports The Australian Cricket Team Did NOT Bend The Knee To Black Lives Matter

Australia’s national day (Australia Day, January 26th) is a public holiday, celebrated at the height of a blazing Australian summer by lazing around at the beach playing beach cricket, or having a backyard barbecue and playing backyard cricket, or by watching some proper Australian cricketers play a proper game of cricket.

The Australian flag is proudly flown by many Australian citizens on the day that celebrates the beginning of modern, civilized (i.e. white) Australia in 1788 when the First Fleet landed in the then British colony of New South Wales, bringing the first boatloads of human capital (and science and technology and literacy and economic development and democracy and all the rest of the fruits—including cricket!— of the British bit of Western civilization) to an Aboriginal Australia stuck in Stone Age stasis for 60,000 years.

Australia, of course, has its meddling contingent of woke wowsers (a uniquely Australian [and New Zealand] term that derogatively refers to someone who “seeks to deprive others of behavior deemed to be immoral or sinful”), who are determined to make white Australians wallow in guilt over what the earnest party-poopers prefer to call Invasion Day and the “loss, hurt and sorrow felt by our Indigenous community on January 26” , in the words of the woke-leftist parliamentarian, Zali Steggall, who wants a “minute of silence” so white Australians can be appropriately mournful rather than playful in the summer sun.

This is impotent virtue-signaling from the former Olympic skier, fortunately, but there are more powerful wowsers and they have taken successful aim at Australia’s national sport (religion, to many) of cricket.  The suits at Cricket Australia (including CA’s “diversity and inclusion manager”—jees, these clowns are everywhere!) who run the sport, have, following whining by their Aboriginal advisory committee, banned any celebration of Australia Day at any of the premier games of cricket scheduled for the day, whilst there will be a “barefoot circle”, “Welcome To Country”, and “smoking ceremony” performed before the games commence, and special Indigenous-designed uniforms will be worn by the players, just to rub it in. [Scott Morrison attacks Cricket Australia for decision to drop term 'Australia Day' from BBL promotions, ABC.net.au, January 21, 2021]

No matter how many times Australia takes the knee for its “white sins”, it is never enough.  There are already thirteen national days dedicated to apologizing and saying sorry to black Australia but the Woke Supremacists will never rest until Australia’s national day, and its national game, have been given the woke treatment.

And this is all about “inclusion”, not “division”, the Woke Supremacists say with a straight face.  They’re the ones, however, making this a zero sum game—as so often, black “inclusion” means black preference whilst putting white Australians, and their culture and national identity, in their (inferior and derided) place.  To point this out, however, is “divisive”.  Game, set and match (if I can mix my sporting metaphors) to the Woke Supremacists.