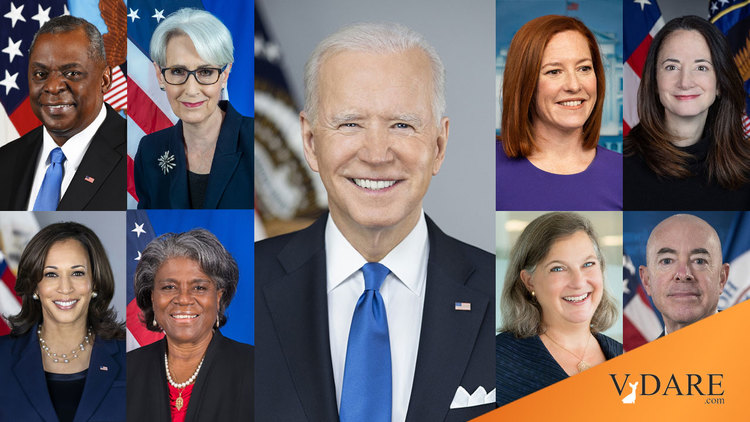 Re: Pentagon Wouldn't Form Ethnic Regiments In Afghanistan, Though They Work In The US, And The British Army

From: A West Texas Reader [Email him]

Whatever one thought of our presence in Afghanistan, I would think that turning it into what is becoming arguably America's worst military defeat (so far) was not desired by the Average Deplorable who sent their sons and daughters to do the fighting and dying.

It is also known that no diverse nation ever survived very long.

Now we learn America's defeat in Afghanistan was brought to us by the most diverse group of U.S. public officials in history. See American Triumph: The Most Inclusive National Embarrassment in Historyin History, by Andrew Stiles , Washington Free Beacon,August 16, 2021.

Biden's Afghanistan withdrawal may be the most embarrassing national security debacle since the Vietnam War—but at least it has an impressive array of female and BIPOC representation!

It is now factually proven: diversity is not a strength.

What defeat will diversity inflict on us next?

James Fulford: Andrew Stiles's article is marked "satire", but only the part about it being an "American Triumph" is satirical. I should also add to the "diverse" people messing up the US's Afghan effort the name of Afghan-American Zalmay Khalilzad, who was Bush's Ambassador to Afghanistan, and is still active in the State Department.

Aside from the idiocy of having a native of Afghanistan represent American interests to the Afghans, Khalilzad is a Pashtun, which means he's a member of one ethnic group in Afghanistan frequently opposed to other ethnic groups.

Khalilzad may be enough of an American-trained globalist to ignore this, but no one in Afghanistan could possibly ignore it.