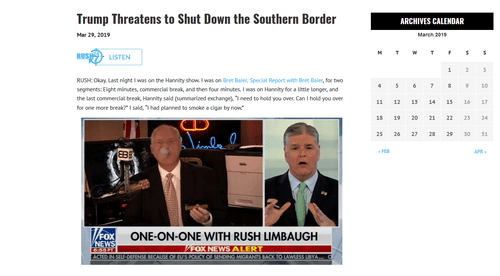 A West Texas Reader Is Happy To Hear Rush Limbaugh Recite The History Of Immigration...Including The Pauses

A West Texas Reader [Email him]

I listened to Rush Limbaugh on March 29th, and he was was really talking great info: on the 1924 immigration paus, immigration reduction, and not falling for another amnesty, his great time-line explanation including how and why the 1986 amnesty failed to stop the problem. And finally, what a disaster the current amnesty attempt would be.

You have to be a Rush 24/7 Member to listen to Rush's archives, but you can read a transcript below:

We as a nation stopped, we shut down legal immigration, all immigration from the early 1920s through 1965. We just shut it down. Now, people got in. I mean there are people that applied on special exemption purposes. It was not zero admissions, but, I mean, we actively shut down immigration as a policy for 40 plus years. The reason for it was that there had been so many people emigrate legally in the late 1800s through the early 1900s when Ellis Island was going bananas. The reason we did was to assimilate all of those people.

They did not sacrifice their origins and they, in many cases in the big cities, set up neighborhoods based on their nationality. Irish neighborhoods, Italian neighborhoods, Polish neighborhoods, you name it. But they wanted to become Americans. They wanted to escape whatever poverty, unfairness, totalitarianism, whatever you want to call it, they wanted freedom. And if you’ve never had freedom, it’s a shock to your system. Requires a lot of self-reliance, self-determination. And assimilating people in any country if you move anywhere and want to become part of that country, assimilation is part of it.

The purpose of immigration is to make immigrants, in our case, Americans. We don’t want them coming here and Balkanizing and separating themselves from Americans and having their own neighborhoods, not learning the language. If they don’t learn the language they’re never gonna get a job, they’re never gonna get an education. All of these things have to happen. We shut down immigration for 40 years to handle the load that had come in and to assimilate them.

Trump Threatens to Shut Down the Southern Border, March 29, 2019

James Fulford writes: All of this is thoroughly familiar to me, because I've been writing about it for years. In fact, I wrote The (First) Thirty Years War For Immigration Reform, which talked about the campaign to pass the 1924 Immigration Act...which started in 1894. Then again, I wrote it in 2001, and Trump was elected only 15 years later.  But it's good to hear people like Rush Limbaugh catching on.