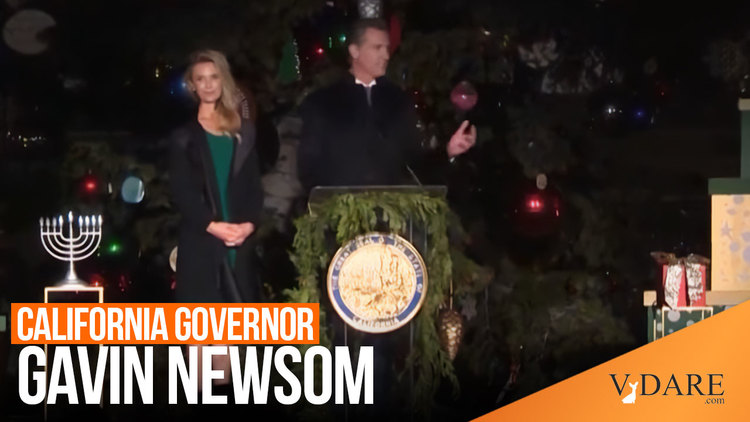 From: Mr. Anti-Humbug [Email him]

I’ve been a proud contributor to your VDARE "War Against Christmas" campaign since 2004. I hope this Christmas season finds you well, despite the dour times we are now living in (I never thought I'd pine for a time like 2004, but given life in 2021 one can't help but do so!!).

I just had to reach out to you after watching (more like enduring) the so-called 90th Annual California State Capitol Tree Lighting ceremony featuring California governor Gavin Newsom that took place a few weeks ago.

The first thing to make note of is that while the official name is still apparently "Christmas Tree" according to Wikipedia (it was officially "Holiday Tree" from 1999-2003, then changed back to "Christmas Tree Lighting" by Arnold Schwarzenegger in 2004), the event as well as the website and press release that describe it completely omit the word "Christmas," which is much in the spirit of the actual televised ceremony that took place in its aversion to Christmas. The official writeup goes to great lengths to avoid mentioning Christmas, even in describing the historical background on the event dating to 1869...a time where I doubt folks were calling it a "holiday" celebration:

The first use of the California State Capitol occurred during a holiday celebration in December of 1869. The holiday tree lighting ceremony began in 1931 with Governor James Rolph. He rearranged his main office located at that time in the west wing of the Capitol to accommodate a large decorated tree central to a gift exchange among staff. This informal tradition continued with the next 6 governors. In 1951, the Governor’s office moved to its present location in the East Annex as did the holiday tree lighting ceremony.

The press release from the CA Department of Developmental Services shows the official name of "Christmas" in the URL [https://www.dds.ca.gov/general/news-room/capitol-christmas-tree-lighting/], but all textual mention of "Christmas" is erased, except for a mention of the 2019 Christmas Tree Lighting.

Not once during the ceremony was the term "Merry Christmas" uttered, and instead we were treated to an onslaught of some awful, tasteless, cringe-inducing original "holiday" songs that, if Christmas got mentioned at all, focused on Christmas as just "one of many" holidays going on...all this at a Christmas Tree Lighting, a Christmas tradition that had been persisted for 90 years. One of the "holiday music" performers was, naturally, the Gay Men's Chorus.

But to me, the most egregious part of the "ceremony" was the fact that a Native American tribal chief and a Jewish rabbi were both centrally featured, both offered blessings and invocations to their religious deity, but NO CHRISTIAN CLERGY were invited or featured. Again, I need to reiterate that this is all taking place at a so-called "[Christmas, officially] TREE LIGHTING" ceremony, not a Native American or Jewish/Hanukkah religious ceremony. Again, never once during the ceremony was "Jesus," "Christmas tree," "Merry Christmas," or "God" mentioned. Additionally, they also referred to the Governor's wife as the "First Partner" throughout, rather than First Lady, yet another symbol of the excessive political correctness of the event. The words "diversity," "many cultures," "our differences," "the holidays" are mentioned more times than one can count. A young Muslim girl was invited to light the tree.

Here is the video of the full ceremony:

Time stamps of relevance, within the above video:

11:20: the Native American/Indian prayer and invocation to their deity begins.

25:32: the Jewish prayer and invocation.

At 34:30, a black woman named Amber Riley sings a Stevie Wonder Christmas song (“What Christmas Means To Me") and “Chestnuts Roasting On An Open Fire,” made famous by Nat King Cole.

It’s impossible to sing even these very secular songs without using the word “Christmas,” so she takes the curse off them by saying “Happy Holidays” before and after each song.

I'd like to have your readers think for a moment...think about whether there's any remote possibility that at an event dedicated to a Jewish festival, or a Muslim festival, or a Native American ceremony, would feature a Christian clergyman invoking Jesus Christ and the Christian God? Zero chance. But for Christmas and Christian traditions, not only are other religions and cultures invited, Christian representation is now being EXCLUDED at these events. Remember that this event has been officially going on since 1931, and even longer ago unofficially.

Despite some gains we enjoyed throughout the late 2000s and early 2010s, the "War Against Christmas" is far from won. In fact, the more "woke" our public culture becomes, the more apparent it becomes to me that eventually the entire idea of Christmas will be set for abolishment, either for being too "White," too "Western," too "colonial," too European-centric, too "patriarchal," too Christian, or all of the above.