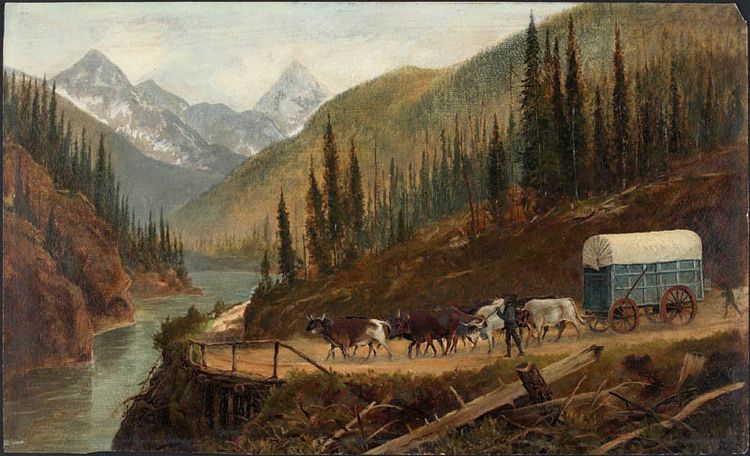 A Reader Uses Sweet Betsy From Pike To Show America Is More Than An Idea—It’s A Nation; Peter Brimelow comments

[Peter Brimelow writes: When we posted Ronald Kyser’s hilarious letter about my misspelling of Binghamton and the remarkable Professor Sung Bok, I noted that that I had mislaid a similarly erudite letter Kyser sent me about his genealogical connection to Sweet Betsy From Pike. I had quoted this folk song to conclude my November 15 2003 speech to the John Randolph Club that was the alleged cause of the Southern Poverty Law Center ($PLC to VDARE.com) naming VDARE.com a “Hate Group” (and, of course, our naming the SPLC a “Treason Group”). Now, with typical kindness and efficiency, Kyser has resupplied it.

What I had said was:

“I don’t know if any of you have listened recently to the words of Sweet Betsy from Pike, which is about the great westward movement of Americans, their conquest of the West.

“It’s a Chronicles rule that literary intellectuals get to talk about economics but economists don't get to talk about literature.  So I beg [Chronicles Editor] Tom [Fleming]'s indulgence here. But I do think Sweet Betsy From Pike rises to the level of the Scottish border ballads—from which, of course, it is lineally descended.

“It’s the story of Betsy and her lover, Ike, who trek to the West.

“And the final verse is this:

They crossed the wide prairies, they climbed the high peaks,

They camped in the mountains for weeks upon weeks,

They fought the wild Indians with musket and ball,

They reached California, in spite of it all.

We just have to do it again.”

[As with Kyser’s Binghamton letter, the point is that America is more than just an idea—it is a nation, with an organic, a.k.a. ethnic, history.]

From: Ronald Kyser (email him)

It was quite a surprise to hear Peter Brimelow quote Sweet Betsy From Pike in New Orleans last week. [VDARE.com note: Remember, a speech made on November 15, 2003. In related news, Peter Brimelow is behind in his correspondence]. So I thought I'd share the following somewhat eerie coincidence.

Probably the best-known recording of that song was the one made by Burl Ives.

A few years ago while researching my grandmother's family, the Vannatters, I compared an 1830 marriage announcement with an 1850 census and found that her great-grand aunt Martha "Patty" Vannatter married a man named John Ives. Further research showed that their son William Riley was the grandfather Burl never knew, and his wife Charlotte his grandmother. (But not the "pipe-smoking, tobacco-chewing grandmother" who taught Burl all those folk tunes—that was his was his mother's Irish mum.) The modern Ives family hadn't been able to identify Patty before this.

Listening to Sweet Betsy thereafter led to a sense of déjà-vu. So I went back to the records and, yep, the census says Patty's mother is Betsy, and the announcement gives their home as "Pike"— Pike Township, near Coudersport, Pa.

The records don't tell whether this Betsy was sweet. But her husband (Jake, not Ike) would eke out by slaying panthers for bounty, so I imagine she was rather tough.

Ronald Kyser claims—and we believe him—that he has read every word of each VDARE.COM columnist since the website first hit the Internet. His previous letters are archived here