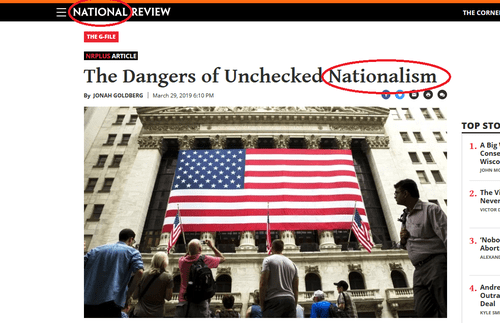 From: A Massachusetts Reader [Email him]

Perhaps the most insidious transformations of the conservative movement perpetrated by the Neo-neoconservatives and the globalists has been essentially re-writing history to cast nationalism as a perilous outlier to conservatism, only to be approached cautiously or as Rich Lowry calls it "benign nationalism".

"Or as Rich and Ramesh write, nationalism “should be tempered by a modesty about the power of government, lest an aggrandizing state wedded to a swollen nationalism run out of control; by religion, which keeps the nation from becoming the first allegiance; and by a respect for other nations that undergirds a cooperative international order.”

Given this rather limited and timorous interpretation of nationalism it could scarcely be used to increase the inspection time at airport customs stations much less stop the ongoing invasion of United States sovereign territory. Both National Review's Rich Lowry and Jonah Goldberg are against President Trump's declaration of a national emergency at our southern border for example.

I would venture they both would profess admiration for former British Prime Minister Margaret Thatcher, yet these wimps would wither if they heard anew her bristling nationalistic calls to defend the Falkland Islands against the Argentinean invasion of that British territory in 1982.

"...British sovereign territory has been invaded by a foreign power"...

"...the job of the Prime Minister is to protect the lives of our boys, and our ships..."

Nationalism has always been an integral part of conservatism, and only relatively recently have the globalist "conservative" revisionists made it out to be suspect. Perhaps they should review what the conservative leaders of the past have said and done before making their idiotic pronouncements decrying actions to protect our national sovereignty.