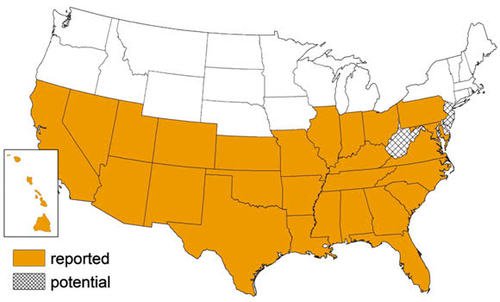 From: Jesse Mossman [Email him]

I think the piece on Chagas disease should have mentioned that you can get it from blood transfusions—so immigration is making the blood supply more dangerous.

Also, shades of Steve Sailer's often-mentioned "Canadian Border Effect", you might call this map of the spread of the Kissing Bug, "The Mexican Border Effect." The map above comes from the Centers for Disease Control web page  Parasites - American Trypanosomiasis (also known as Chagas Disease).

James Fulford writes: The original of Moynihan's Law of the Canadian Border, enunciated in Defining Deviancy Down. [PDF] American Scholar, Winter 1993, is that

the correlation between eighth-grade math scores and distance of state capitals from the Canadian border was .522, a respectable showing.

By contrast, the correlation with per pupil expenditure was a derisory .203.

Moynihan offered the policy proposal "that states wishing to improve their schools should move closer to Canada" rather than increasing spending on education—which doesn't work.  The corollary is that there is higher correlation between distance from the Mexican border and imported disease than there is in between said disease and  spending on public health. Money spent on deporting people, on the other hand, is never wasted.