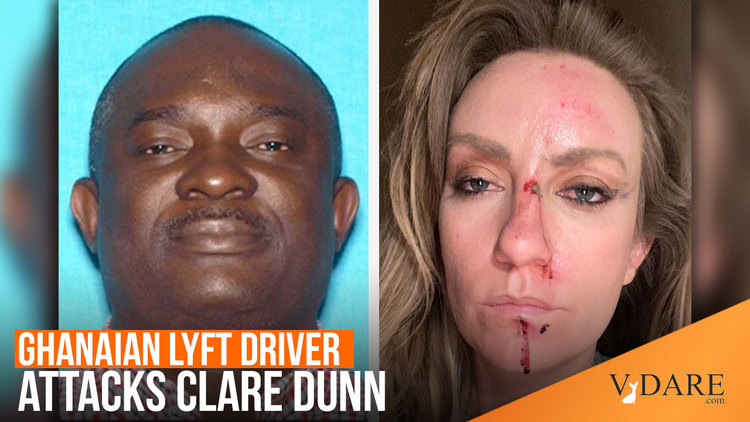 From: An Anonymous Female Reader [Email her]

“I had that intuition that something was wrong, and I ignored it,” Dunn said, saying she assumed she was “overthinking it.” https://t.co/vCrOMiZKNo

Although it's not stated in the NY Post article, this guy must be an African immigrant of some kind, judging by his name (not to mention his appearance).

James Fulford writes: This is, as our reader suggests, both a black crime story and an immigration story. Alleged assaulter Albert Boakye is a Ghanaian, because Boakye is, according to Google, a Ghanaian name.

This is worth noting:

The singer said she and her friend later admitted to each other that they felt “alarm bells” about the driver and are tormented at having ignored them.

“I had that intuition that something was wrong, and I ignored it,” Dunn said, saying she assumed she was “overthinking it.”

“I blame myself,” she said, crying.

The thing is, if she had called the police because she thought her black driver was dangerous, she risked becoming an internationally famous racist: see "And Five Minutes Later She Is Dead"—The Dead Beckys Who Should Have Called 911.