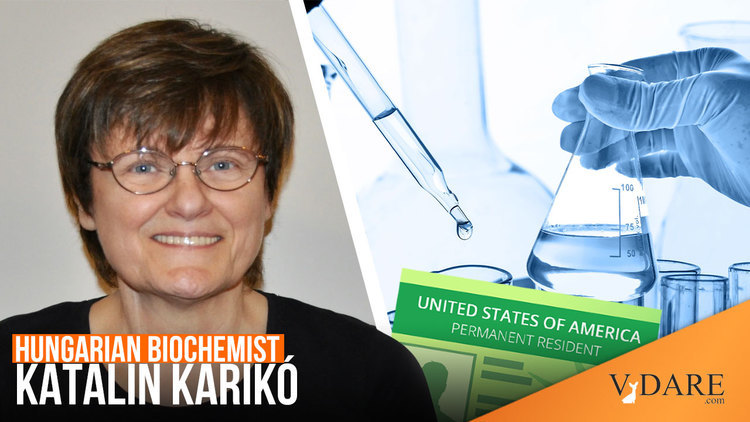 A Reader Points To One Justification For Hiring Foreign Biology Lab Workers—They're Not As Woke As Americans!

From: The AntiSocial Darwinist [Email him]

I enjoyed your recent piece about Katalin Kariko. I'm the principal investigator of a biology lab at a major research university and I'm often disgusted at how my colleagues treat their foreign employees. Chinese and Indian postdocs are routinely hired at the bare minimum salary for their positions and then worked like slaves—insane hours and no holidays—with the threat of losing their visa keeping them from moving to a different position or complaining about their conditions. As you mention, this is not only bad for the immigrant postdocs, it also drives down salaries for American postdocs and consumes jobs that are in scarce supply for what are obviously some of the smartest and most productive people in our country. Not only that, it creates a glut of applicants for the even scarcer tenure-track professor positions, leaving an obscene number of unemployed or barely employed Ph.D. level scientists stuck in postdoc limbo well into their thirties or even later.

I would take issue, though, with the idea that it's always bad to hire foreign lab workers. Over the past few years I've had to take on an increasing number of foreign researchers for one reason, which is possibly an even bigger problem for the U.S. than immigration—the Ph.D.-level American workforce is intolerably woke. Thanks to a Twitter cancel mob, my politics are spread all over Google (oh my god, he reads Steve Sailer!), which makes it essentially impossible for me to hire Americans from the Millennial generation or younger. So if I want to keep my lab running, I have no choice but to bring in non-Western people, who come from countries that haven't been infected yet with our new state religion. So until somebody starts a "Based Scientists Club," immigrant scientists might be the best way to de-wokify STEM...

Anyway, thanks for highlighting this important dynamic.