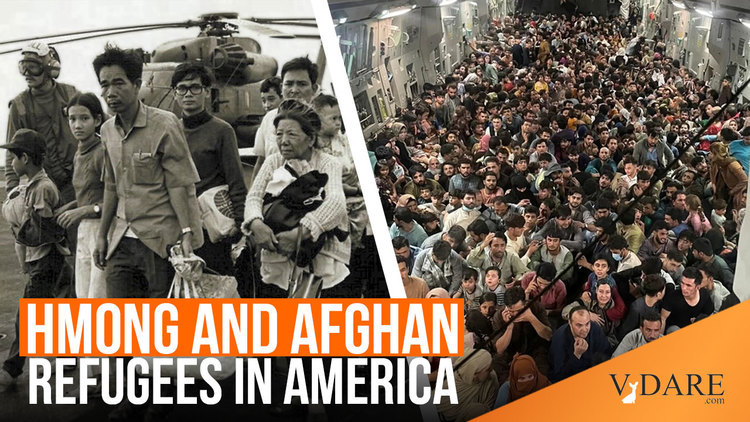 Re: THE FULFORD FILE: Why Would We Expect “Afghan Allies” To Assimilate Better Than The Hmong?

James Fulford's article makes good points about the social difficulties with the Hmong in Wausau, Wisconsin. However, I feel you missed an opportunity to reinforce a few relevant negative points regarding artificial cultural diversity, points that are blind spots for English-speaking people with Judeo-Christian, classical liberal values, points that are also “radioactive” and dangerously un-PC.

The first is IQ, the single most effective predictor of “success in life,” meaning making a living and supporting yourself financially. The average IQ for Laotians, of whom the Hmong are a subset, is 89-90, depending on the source; the average IQ in Afghanistan is 83-84. IQ is brought up occasionally on VDARE.com, one of the few Internet sites with the intellectual honesty and courage to mention it.

My other point, also dangerously un-PC, is the observation that Afghani and Islamic culture never had an Enlightenment period or anything remotely resembling a philosophical movement away from religious dogma. The main religion of “lowlands” Laos is Theravada Buddhism, with a bit of Christianity in a few villages, and animism among the Hmong. These three collections of religious beliefs and values have got to be inherently less dogmatic and belligerent than Islam. No Enlightenment either, but not as antipodal to Western values as Islam.

I feel the difficult, intellectually honest conversation about race and IQ needs considerably more groundwork before it can ever occur in America, I’m sorry to say. The Brits are a millimeter closer to it, perhaps, but their problems with blacks are different, less severe, and less stark and pervasive than in the US. These reasons are why I bother to point out missed opportunities to improve that missing groundwork.