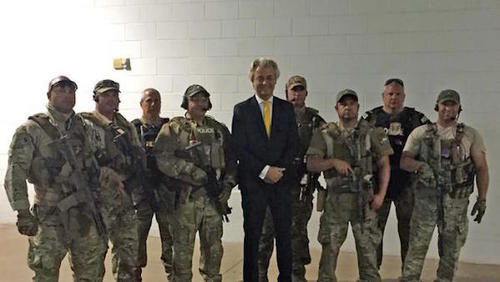 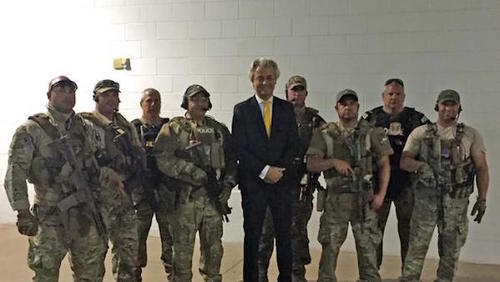 Letter from an Anonymous Woman [Email her]

Upon reading the Brenda Walker article I realized the true genius of the organization of this event.

As Geert Wilders said in his speech, they chose Garland for a REASON. Apparently, after the Charlie Hebdo attacks there were groups of Islamic whiners in Garland that staged a protest against free expression. (Stand With The Prophet.)

So what did Geert and Pam decide to do? Go directly there and have a Draw a Muhammed contest!

With top notch Dutch security and a Texas SWAT team, they were ready for what would be an entirely predictable Islamic reaction and had brave men in uniform armed and ready.

This was genius on a few levels:

A) It vindicated Wilders and Gellars claims that Islamists are against free speech and cannot handle criticism without violent reprisal.

B) It draws a line in the sand on the issue of free speech. It sends a message to the Islamic apologists and the open-borders types that massive Islamic immigration will always spur more of these attacks, whether they agree with Gellar and Wilder or not.

C) It forced the leftist owned Cultural Marxist media machine to engage in VICTIM BLAMING. REAL victim blaming, not the phony type of victim blaming that Left-wing harpies accuse Steve Sailer of when he blows one of their tall tales to bits.

In addition, it forced the media to side either with free speech or Islamic violence. Predictably, they sided with Islamic violence. Their narrative cannot allow them to side with "hate" like Geert or Pamela, after all they SAY naughty things.

I saw all the articles from all the usual culprits; NPR, Mic, Alternet, etc.

The funny thing was the comment section. The everyday leftists weren't following the narrative of the Cultural Marxist media. Comment after comment sided with free speech over villainizing the event organizers, and these were people who are VERY "triggered" by the likes of Gellar and Wilder.

One commenter on an NPR article wrote something to the effect of "There were two kinds of people at that event last night. Those who spoke and those who shot. NPR decided to investigate and demonize the ones who spoke."

Does it get any clearer than that?

I have a suggestion for Geert and Pamela- How about an American tour?

It would keep forcing the media to value political correctness over human life. Make the leftist media machine defend the Islamists over and over again.

It's worth a shot. I say they start fundraising.