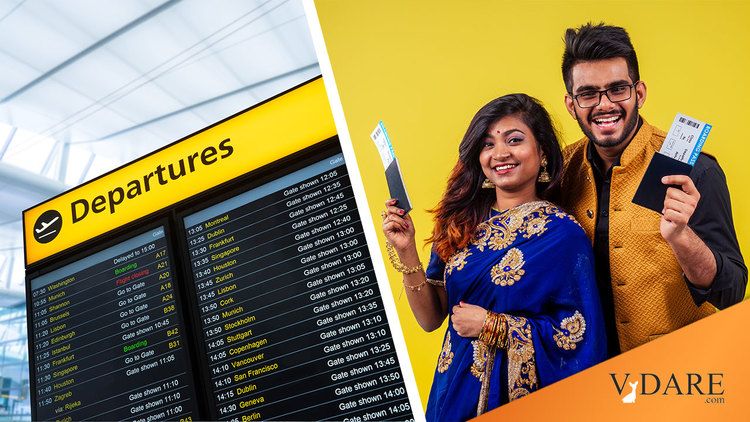 A Patriot Lawyer Says We Should Introduce A New Word To The Immigration Debate: "Repatriation"

See, earlier: A Reader Is Cheered By Stories Of Blacks Abandoning The "Racist" USA. Can This Be Encouraged?

VDARE.com does a very good job of explaining the dangers of both legal and illegal immigration to our national survival. While reducing both forms of immigration is imperative, I have seen very little written about the concept of repatriating post-1965 immigrants. If, as Calvin Coolidge once said, America is going to remain American, this should be enshrined in some type of national policy.

There may be some opportunities for this to occur. While much has been written about declining Western birth rates, a similar trend has also happened in developing countries like China, India, and Mexico. As their economies grow, they will look for new sources of labor. America has this source of labor in the form of their own ethnic kin. The descendants of these post-1965 immigrants should be given a stipend to renounce their American citizenship and emigrate to their ancestral lands. It could be promoted as a type of foreign aid to less fortunate countries. Essentially, we would be supplying them with much needed human capital.

VDARE.com has done a wonderful job bringing the phrase “immigration moratorium “ into the national conversation. Now it should make “repatriation” part of that same discussion.

James Fulford writes: There's a trope in popular culture of an anti-immigrant bigot saying "Why don't you go back where you came from?" to someone who is visibly foreign, and they say "I came from Queens, NY". (This, by the way, is where Omar Mateen came from.) However, the late 20th century attack on colonialism and white settler communities led to millions  of white people born in India, Kenya, Rhodesia and South Africa going back to where their fathers and grandfathers came from, so I don't see why African and Indian-Americans can't do the same thing.