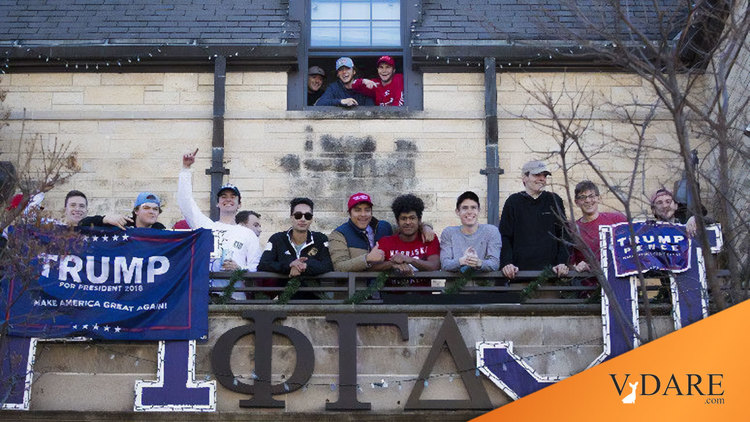 From: Dale Gribble [Email him]

A recent target of apprentice cat ladies and the Lying Press’s regular Two Minutes Hate has been the Phi Gamma Delta fraternity (aka Fijis) at the University of Nebraska Lincoln, among others [After Rape Accusations, Fraternities Face Protests and Growing Anger, by Anemona Hartocollis and Giulia Heyward, October 1, 2021].

One of the Deplorable Chads at Fiji allegedly raped an intoxicated 17 yr. old, sparking an investigation by the university police department and nightly protests outside the frat house

Now they're engaging in violence to protest Haven Monahan!https://t.co/VIOcOLbtcA

The Lying Press NY Times story says the frat member dropped out of school. Article fails to mention it’s been two months and no charges against the boy.

Unfortunately Phi Gamma Delta is just across the street from the student union. This drew the cat girls’ scorn because the Phi Gamma Delta chads hung a huge Trump banner on their house the day of the Pussyhat March back in January 2017.

I try to keep my ear to the ground but I don’t see the girls and their beta boyfriends picketing Nebraska athletics when varsity athletes here have been responsible for many more rape cases than the Chad houses.

Examples, and these are only recent ones, and only from the Nebraska Cornhuskers:

Woman alleged two former football players gang-raped her when she consented to sex but the players decided to tag team her. One pled to a misdemeanor and one was acquitted in Lancaster County District Court.

Wonder why it’s a mystery that men are declining college? Unless you have a jump shot and a rocket 40 time you are a chad cis-gendered rapist.

Looks like protesting frat chads is real punching down.