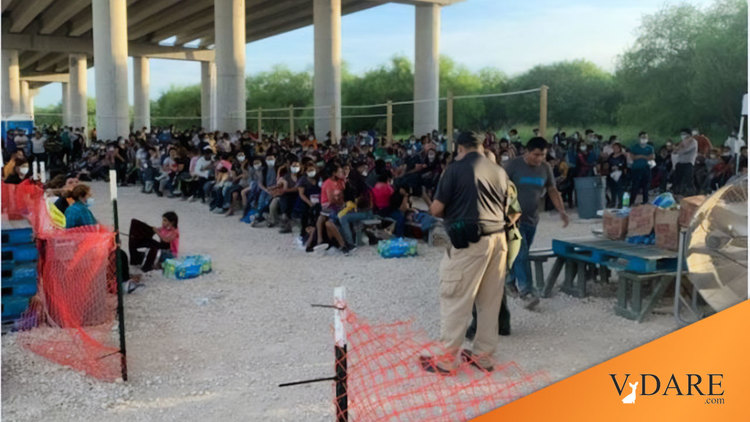 A Former Border Patrol Agent Reports, With Picture, On The THOUSANDS Of Illegals Thronging To The Southern Border

From: A Former Border Patrol Agent [Email him]

I talked to one of my buddies down on the border last night. He sent me this picture: 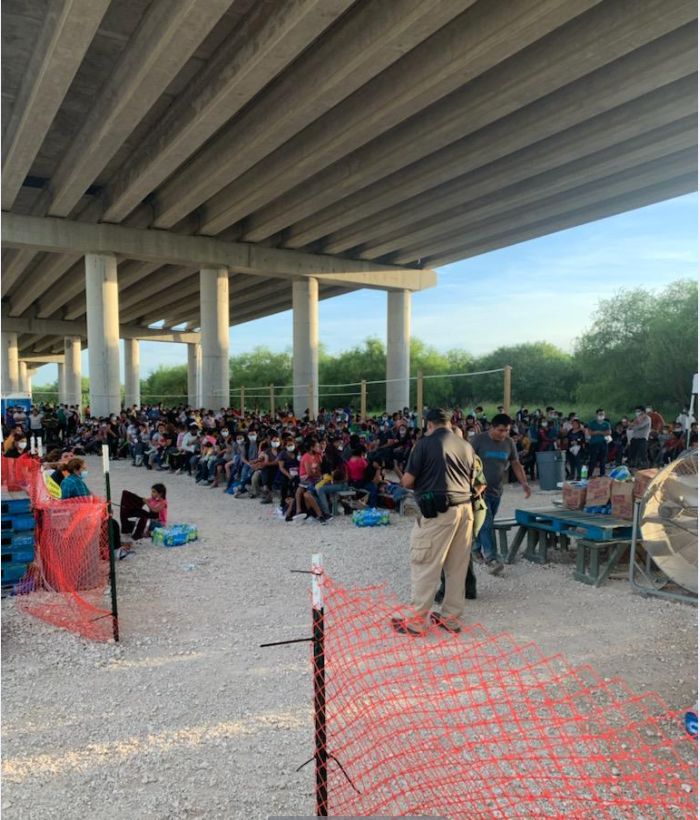 That was a picture under the Anzalduas Port of Entry. This line of people goes all the way down to the river bank, about a quarter of a mile. He said the weather was around 100 to 105 degrees. Then he added somewhat facetiously, "At least, they aren't in cages." He elaborated that "You couldn't chase these people out from under that bridge with dogs and fire hoses." They are all waiting patiently for their paperwork to be allowed to go travel to the rest of America. It's waiting for those precious papers that keeps them there obediently waiting in the sweltering heat for hours if not days.

Yesterday, there were 8,000 waiting to be processed. That didn't count any illegal aliens in the brush circumventing the whole process and sneaking in completely illegally or those who were in the middle of being processed. They do about two to three hundred aliens at a time. Some of the illegal aliens are being sent to other stations like Kingsville to be processed. That takes about an hour and forty five minutes of driving time in one direction. It doesn't account for making sure all the kids have hit the restroom before you leave. Then, after they've been processed, they have to be transported all the way back again where they are turned over to Catholic Charities. Catholic Charities apparently has some sort of government contract with Health and Human Services.

My buddy didn't know where they were sent after that.

He did say that some of the single Mexican males are being sent back. If they're being caught, it's because Texas Department of Public Safety (DPS, Texas's version of State Troopers) was having their Troopers pull over loaded vehicles as they try to make their way north.

When I did my stint down on the southern border before retiring, it was harped on us not to take pictures and certainly not to post anything on social media. Supposedly, one of the Agents' wives had posted a picture of what was happening and even though she was in Montana, CNN got hold of it and made a big stink. After that, we were warned about taking pictures and told it was against policy. Anyone caught taking pictures could be severely punished.

I thought then and still think now that this policy was absolutely the wrong thing to do. Rather than hide from the American public how bad it is, they should have encouraged every Agent to post it to every social media platform they could to tell the truth. Instead, this makes Agents complicit in pulling the wool over the eyes of the American public.

NEW: This is the largest group of migrants we’ve ever seen being held by Border Patrol under Anzalduas Bridge in Mission, TX. Looks like it could be up to 1,000 people. We can only get a look at the area with our drone. There’s a popular Rio Grande crossing area nearby. @FoxNews pic.twitter.com/AsAygsO966