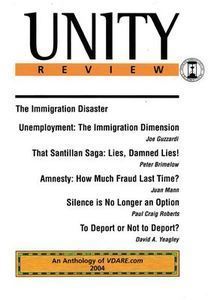 Featuring a selection of articles supporting patriotic immigration reform from some of the most insightful columnists on the issue like Peter Brimelow, Paul Craig Roberts, Steve Sailer and Sam Francis. All of these are taken from the indispensible VDARE.com website.

Criticizing mass immigration has become a taboo issue for both the Left and Right, but these writers do not shy away from it. They do not confine their critique to illegal immigration or the more politically correct "numbers" argument (though they do not ignore either aspect.) Instead, they also address the important demographic, cultural, and other politically incorrect aspects that mass immigration will have on America.

If you are concerned about the future of America, read this book.