One snowy night years ago, shortly after I arrived in North America from Britain, I went with a young woman to a social function in Winnipeg, the Canadian prairie city where I was then living. I am sorry to say I neglected her. For she introduced me to the parents of friends. Their story absorbed me for most of the evening.

The husband was Soviet-born, what American ethnographers call a "Russian German"—a descendant of German colonists invited into southern Russia by Catherine the Great in the 18th century. His family were Mennonites, members of the historic pacifist Protestant sect which, not coincidentally, had also settled extensively in the Winnipeg area. But, reflecting the social turmoil of revolutionary Russia, he told me that, like all the young men in his village, he had been eager to wear the glamorous uniform of the Red Army.

He got his chance and, following catastrophic defeat, found himself in the even more impressive uniform of the Wehrmacht. After many vicissitudes, he had reached Winnipeg. He was now a car dealer.

It is a curious paradox that, whereas North Americans in general are profoundly innocent about foreign affairs, there is a wealth of extraordinary experience among immigrant individuals and communities. Somehow, the latter never seems to affect the former. But with the opening up of Eastern Europe, many more stories like my Mennonite friend's are going to be heard. They may eventually change the way contemporary history is viewed. 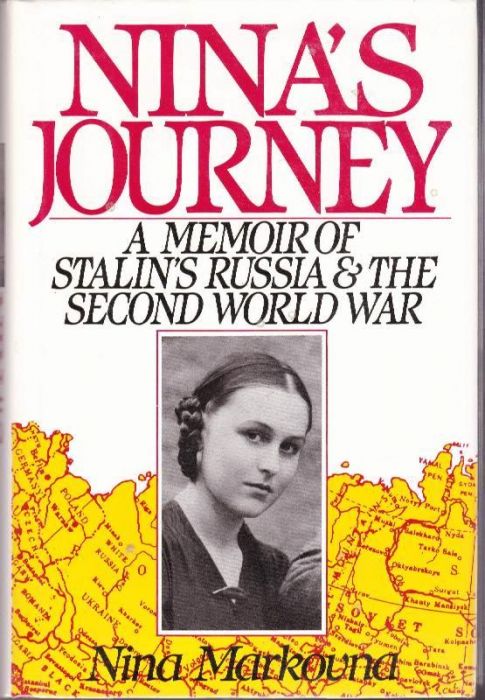 A remarkable example of such a story is Nina Markovna's Nina's Journey: A Memoir of Stalin's Russia and the Second World War, just published here by Regnery Gateway ($19.95). This would normally be a recipe for oblivion, but eventually one of these émigré memoirs is going to seize the imagination of the world, just as Solzhenitsyn's Gulag Archipelago made Stalin's purges respectably acknowledgeable, although the facts had long been known to any reader of Robert Conquest, or for that matter of Reader's Digest.

Markovna was a teenage girl living in the Crimea when war broke out. She was deported to Germany as a labourer and eventually married an American soldier. She now lives in Florida.

Eye-witness accounts as vivid as this must of course be treated with caution. On the other hand, accounts no more vivid than Markovna's are now inspiring the American authorities to deport old men for war crimes allegedly committed more than 40 years ago. Nina's Journey provides a further context.

One point that emerges quickly is the sheer scale and nightmare intensity of Stalin's purges. One of Markovna's childhood memories is of inadvertently betraying her mother to a night of NKVD interrogation by remarking to a teacher that sugar was common before the Revolution. Another is of watching her mother and her aunt agreeing instantly to part forever after her uncle's deportation and death, fearing that further contact would attract informers and doom their children. Her uncle's crime: dressing a Christmas tree.

How insanely demanding it was, this communist Moloch. One telling detail: when the Germans first took Markovna's home town of Feodosiya in 1941, "the Muslim mosques were cleansed, purified, and reopened to the faithful, as were the Christian churches...People began to cart to the marketplace things they reckoned they could barter...Seamstresses appeared in droves, carpenters walked from door to door, and shoemakers were welcomed with shouts of delight at every dwelling. These occupations had all been previously forbidden to function, except under state supervision."

This suicidal repression of economic activity had been going on in the teeth of food shortages verging on famine. Pol Pot, in short, was not an aberration. The same manic streak ran through much better known cases of communism. It could not have been invisible to Western observers. Yet they stubbornly chose to see what Sidney and Beatrice Webb called "a new civilization".

Markovna adds: "Jews 'our' Jews too advertised their willingness to give instructions in the German language and in music...(and) registered with the German authorities as experienced watchmakers and cobblers."

"Our" Jews were some 1,000 locals, as opposed to the 3,000 "Communist Jews" who came and went with Soviet rule in this city of 250,000, giving its tyranny a little-noted ethnic undertone. But stories of Nazi anti-semitism were regarded by "our" Jews and everyone else as just more Soviet propaganda until 98 special units arrived and "our" Jews were massacred.

Markovna's story, however, has another twist, perhaps unexpected to my own war-comic generation. The Wehrmacht itself, she reports, was scrupulously disciplined. This was in dramatic contrast to the Red Army, which briefly retook Feodosiya amid appalling rape and murder of its own people. Even when the Germans returned and found their wounded massacred, their doctors continued to treat Soviet casualties impartially.

As Eastern Europe emerges from the Soviet snow, we could find, like a skeleton finally picked clean of all excrescence, the honour of the German army still intact. The honour of the Western allies, who tolerated the Stalinism, area bombing and forced repatriations graphically portrayed here, may be in rather more odorous condition.

The author is a senior editor of Forbes magazine.