Will GOP Establishment Swindle Trump in Cleveland, Too?

In the race for the Republican nomination, Donald Trump would seem to be in the catbird seat. He has won the most states, the most delegates and the most votes--by nearly two million. 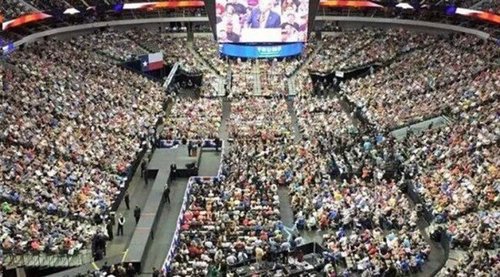 He has brought out the largest crowds and is poised for huge wins in the largest states of the East, New York and Pennsylvania.

Yet, there is a growing probability that the backroom boys will steal the nomination from him at a brokered convention in Cleveland.

Over the weekend, Colorado awarded all 34 delegates to Ted Cruz. The fix had been in since August, when party officials, alarmed at Trump's popularity, decided it would be best if Colorado Republicans were not allowed to vote on the party's nominee.

After all, these poor folks might get it wrong.

In South Carolina, where Trump swept the primary, a plot is afoot for a mass desertion of Trump delegates after the first ballot.

The Republican Party in Georgia, another state Trump won, is also talking up delegate defections.

In state after state, when Trump wins, and moves on, the apparatchiks arrive — to thieve delegates for Cruz.

"This is a crooked system, folks," says Trump, "the system is rigged. ... I go to Louisiana. I win Louisiana. ... Then I find out I get less delegates than Cruz because of some nonsense. ... I say this to the RNC. I say it to the Republican Party: You're going to have a big problem, folks, because the people don't like what's going on."

Something rotten is also going on in the Democratic race.

Bernie Sanders is on a roll, having won seven straight primaries and caucuses. Yet, he keeps falling further behind.

"Because the system is corrupt."

Sanders seems to be shorted every time he wins a primary or caucus. And the insurmountable hurdle he faces was erected against folks like Sanders some time ago — the 700-plus superdelegates.

These are Democratic congressmen, senators, governors and Party officials. By more than 10-1, close to 500 of these superdelegates have lined up to back Hillary Clinton and stop Sanders.

The Democratic Party believes in democracy, up to a point — that point being that Democratic voters will not be permitted to nominate a candidate to whom the party elites object.

Richard Nixon's 49-state triumph in 1972 cured the Democrats of their naive belief in democracy. Henceforth, the George McGoverns and Bernie Sanderses can run. But they will not be allowed to win.

Yet, since it is Trump and Sanders who have stirred the greatest passion and brought out the biggest crowds, if both are seen as having been cheated by insiders, then the American political system may suffer a setback similar to that caused by the "corrupt bargain" of 1824.

Andrew Jackson ran first in the popular vote and the Electoral College, but was short of victory. John Quincy Adams, who ran second, got Speaker Henry Clay to deliver the House of Representatives, and thus make Adams president. Clay became Adam's secretary of state.

In 1828, Jackson got his revenge, winning the presidency. Clay would never make it. On his deathbed, Jackson confided that among the great regrets of his life was that he did not shoot Henry Clay.

While the turnout in the Democratic primaries and caucuses has not matched the Obama-Clinton race of 2008, Sanders has rallied the young and working class, turned out the biggest crowds and generated the greatest enthusiasm.

But on the Republican side, the Party has had the largest turnout in American history. And the reason is Trump.

And if, after having won the most votes and delegates, Trump is seen as having been swindled out of a nomination he won, by intraparty scheming in Cleveland, the GOP could suffer a self-inflicted wound from which it might not recover.

Another matter that could prevent a return to national unity? The deepening split over trade and foreign policy, both between the parties, and within the parties.

Sanders, last week, was saying that what disqualifies Clinton as president is her support for free trade deals that gutted American industry and cost millions of jobs, and her support for an Iraq War that was among the costliest, bloodiest blunders in U.S. history.

On both issues, Trump agrees with Sanders. Cruz, an uber-hawk and free trader, is more aligned with Clinton.

If the "America First" stance on foreign and trade policy, close to a majority position today, is unrepresented by either party this fall, and we get a free trade, War Party president, the divisions within the country will widen and deepen.

If Sanders and his revolution are sent packing in Philadelphia, and Trump is robbed in Cleveland of a nomination Americans believe he won political disillusionment, and political realignment, may be at hand.