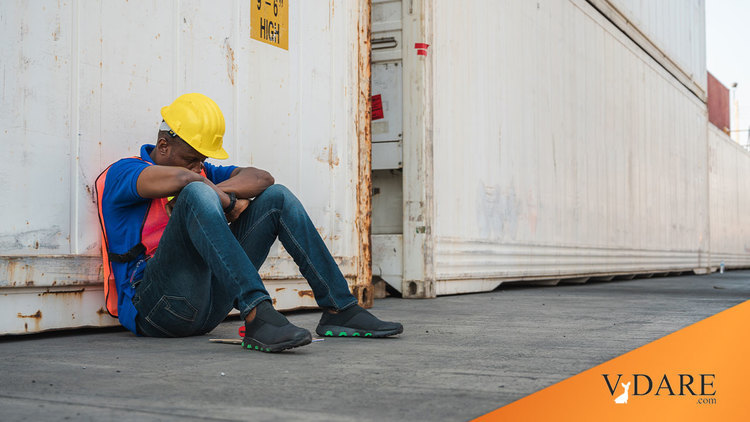 Why The Black Caucus Looks The Other Way On Immigration

[Joe will be in the Terry Anderson Show this Sunday, May 11, 8 p.m. PST. Click here for local stations and web access]

Of the dozens of mysteries that surround Congress' adamant avoidance of the immigration issue, none is so bewildering as why the Congressional Black Caucus looks the other way. Mass unskilled immigration has a particularly dramatic impact on their constituents, the most vulnerable of Americans.

When I read a new report by the Children's Defense Fund that found that more black children—about one million—are now living in extreme poverty than ever (a 40% increase since 2000), I was reminded once again of the Black Caucus' extraordinary dereliction of duty.

The Black Caucus has sold out black Americans. Even though black families live in poverty throughout America, the Caucus is content—eager, in fact—to import more poor people who will compete head-to-head for jobs at the lower end of the economic scale.

Legal and illegal immigration has undercut blacks from the jobs they once held in meat plants, service industries, and on construction crews. In many cases those were union jobs that paid good wages with full benefits. Now those jobs go to illegal aliens who work for pennies above the minimum wage.

Yet from the Black Caucus nary a peep is heard.

For an explanation of this betrayal of blacks by blacks, I contacted two experts—one black, Terry Anderson, who hosts California's most popular Sunday evening radio show, and one white, Roy Beck, Executive Director of NumbersUSA.com and author of the excellent book The Case Against Immigration.

Before calling either, I went to the Americans for Better Immigration website to check the Black Caucus immigration voting records.

On the website, Congressmen receive report card grades on amnesty, chain migration, worker protection, etc. The grades are for "Career" votes and "Recent" votes from January 1, 2003.

As an example, Colorado Congressman Tom Tancredo has an A+ for both "Career" and "Recent."

Illinois Congressman Luis Gutierrez has an F and F-.

I asked Terry Anderson to explain it to me. His explanation:

"Racism, in a word. The disdain and distrust that the Black Caucus has for white America is so great that it is willing to sell the black community out in a heartbeat. The Caucus will take a brown face over a white face any day. If you think for a minute that any Black Caucus member is going to take sides with the all-white immigration reduction leaders, you're dreaming."

Anderson suggested I watch his 1999 Congressional testimony to then Chairman of the Immigration Sub-Committee Texas Rep. Lamar Smith (A+ and B+) and Black Caucus member Texas Rep. Sheila Jackson Lee (Grades F and F).

Jackson-Lee tipped her hand at outset by warning the witnesses - who had traveled 2,000 miles to testify about illegal immigration's impact on their daily lives - not to paint immigrants with "a broad brush" and to avoid "bashing."

"We are all God's children; we all come from somewhere," said Jackson-Lee.

Then, referring to the pro-illegal aliens lobbyists, Anderson went on:

"They won't tell you how skilled black workers in Los Angeles can no longer apply their trade. Body and fender, roofers, framers, drywallers, gardeners, and now even truck drivers. They won't dare tell you about all of the race riots in our schools where the blacks are told to take their black asses back to Africa. Even the news media has refused to tell of this while we know that they are aware or it. There is NEVER a mention of all of the billboards in Spanish and how Chevron is now advertising in Spanish on English language TV.

"The illegals won't hire us and won't buy from us. But still our elected black officials won't help us.

"I met once a few years ago with my Congressman, Julian Dixon. He said he would check into it. He has done nothing. What he HAS done is vote against every bill that would help my and his race of people. He now refuses to meet with me.

"We, black Americans are being displaced in Los Angeles. We are being systematically and economically replaced.

"And the next time somebody tells you that the illegals only takes jobs that blacks won't do, just remember that WE were doing those jobs before the illegal got here.

"AND in places of the country where there is not yet a problem with illegals, you can STILL get your grass cut, your dinner served, your dishes bussed and your hotel room cleaned.

"Funny how in those places Americans are doing those jobs."

During the question and answer, Anderson said that "racist" groups like MALDEF, LULAC, MeCHA and La Raza, had Congress' attention.

Jackson-Lee had no answer. At the end of the 1999 session, Jackson-Lee approached Anderson with her hand outstretched. "I don't think I'll shake your hand. You're not listening to us," Anderson said.

Roy Beck added his perspective. "You have to remember that the demographics are shifting very fast," said Beck. "At least half of the Black Caucus members represent districts whose make-up is one-third or more Hispanic."

"But," Beck continued, "I just don't think the Black Caucus realizes the full extent of the harm they are doing to blacks. The Black Caucus is vaguely aware but chooses not to dwell on it. The reality may be too painful."

In his book The Case Against Immigration, Beck devoted two chapters to the consequences of mass immigration for blacks.

During our talk, Beck said that the economic fate of black workers during the recent thirty years is the same as it has always been during periods of high immigration: jobs become scarce and wages go down.

"After years of steady improvement, economic and social conditions for blacks citizens have deteriorated substantially since the 1970s," said Beck. (See the recent report by the Economic Policy Institute, "The State of Working America":)

Roy Beck stressed the importance of looking at the Black Caucus failures in a historic light.

"Just as blacks were poised to take advantage of the civil rights laws of the 1960s, the flow of foreign workers to the highest wage cities in the North and West blocked them. The difference between this era and past eras is that black leaders—Booker T. Washington, W.E.B. Du Bois as well as dozens of black preachers, scholars and journalists vehemently denounced the arrival of European, Mexican, Chinese and Japanese workers."

Beck added that the pro-immigration advocacy of white groups adds insult to injury to blacks. "Blacks have already repeatedly been displaced, overwhelmed and intimidated by European immigrants. Now we're asking them to sit still for it again from Mexicans—here illegally, no less?"

Concluded Beck, "Anything that stands in the way of economic and social progress for blacks is not acceptable under any circumstances."

Alas, Anderson and Beck's message has not gotten through to the Black Caucus—especially to Jackson-Lee who has just introduced H.R. 1830, the Earned Legalization and Family Unification Act.

This poisonous bill translates into amnesty, in-state college tuition and, potentially, a long feed at the public trough for lawbreakers.

But he never suspected she was stone deaf.