Why Not A Movie About Jack Crenshaw?—The White Man Who Actually Did What HIDDEN FIGURES Credits To Black Women 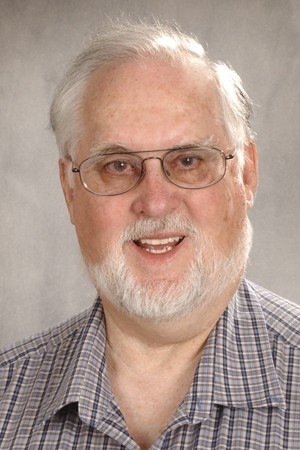 See also by Paul Kersey: Hyped Figures: John Glenn And The PC Myth Of Katherine Johnson–Unsung Black Women Were NOT What Got Us To The Moon

The PTB are telling us the movie Hidden Figures is a hit—and proof of the need for more non-whites in films [Hidden Figures Should Be A Diversity Wake-Up Call For Film, by Stacy Smith, Katherine Pieper, and Marc Choueiti, Wired, January 6, 2017]. My reaction: why not a movie about Dr. Jack Crenshaw?—the white Southerner (right)  who actually did, with a computer, the bulk of the Apollo Project work that Hollywood claims three, never-before-mentioned black women did with slide rules.

The movie depicting Katherine Johnson and her colleagues allegedly propelling NASA into space debuted with an opening of $21.8 million, good enough to force Rogue One: A Star Wars Story into second place. Of course, even at a Golden Globes dedicated to virtue signaling, NBC’s Jenna Bush Hager—daughter of Dubya—and actor Michael Keaton managed to confuse the movie with Fences, another  piece of African-American Oscar bait, calling it “Hidden Fences” and triggering a whole new round of caterwauling about racist white people. [Jenna Bush Hager and Michael Keaton flub movie title at golden globes, by Daniel Victor, The New York Times, January 8, 2017]

Yet the incident is significant. Hidden Figures is an example of an Affirmative Action hit which Main Stream Media critics feel compelled to treat with reverence.

Hidden Figures’ opening was actually about the same as that of Redtails, George Lucas’ similar movie mythologization of the Tuskegee Airmen—which subsequently nosedived. My prediction: after initial black audience enthusiasm, white audiences will not materialize for a movie blatantly designed to make them feel guilty. And international moviegoers will have even less interest.

But that’s not to say the PTB aren’t trying. Consider: 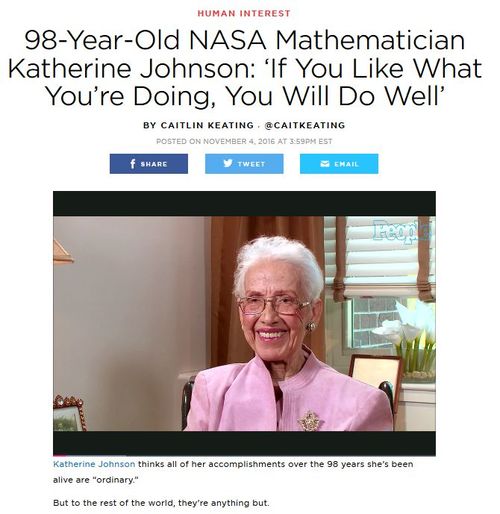 All of which is quite a heavy burden to lay on the life story of Hidden Figures’ protagonist, the extremely light-skinned Katherine Johnson. Indeed, when she received the Presidential Medal of Freedom, it was hard to tell if she was actually black.(See picture at right) [98-Year-Old NASA Mathematician Katherine Johnson: ‘If You Like What You’re Doing, You Will Do Well,’ by Caitlin Keating, People, November 4, 2016].

More importantly, at a time when the Main Stream Media is crusading against supposed “fake news,” Hidden Figures is something which we can call “fake history.” My VDARE.com critique has been more recently confirmed, albeit cautiously, by an analysis on the mainstream website History vs. Hollywood:

Did they really think Katherine G. Johnson was the janitor there to empty the garbage can?

No. This story does not appear in Margot Lee Shetterly's Hidden Figures book, on which the movie is based, and seems to be an element of fiction created by the filmmakers. It should be noted that the movie was actually based on just a 55-page proposal for the book, which might in part explain some of the movie's deviations. The book was released on September 9, 2016, long after production on the movie had wrapped. However, the filmmakers did have access to the author and her notes. -Space.com 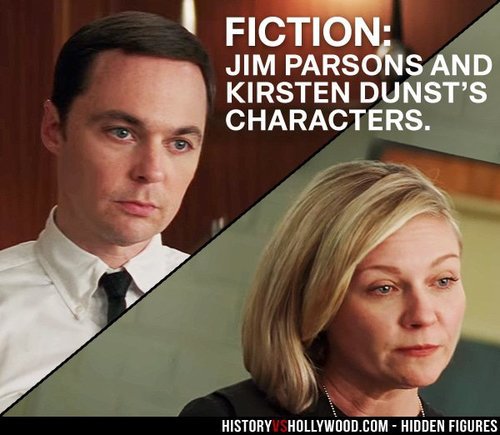 Is Jim Parson’s character, NASA engineer Paul Stafford, based on a real person?

No. In fact-checking the Hidden Figures movie, we learned that white collar statistician Paul Stafford, portrayed by Jim Parsons, is a fictional character. He was created to represent certain racist and sexist attitudes that existed during the 1950s. In the film, he thwarts every effort Katherine (Taraji P. Henson) makes to get ahead, including reducing her job qualifications to secretarial duty, omitting her byline on official reports, and telling her it's not appropriate for women to attend space program briefings. By the end of the movie, Stafford's fictional storyline includes the character having a change of heart, which is emphasized when he brings Katherine a cup of coffee.

Is Kirsten Dunst's character, Vivian Mitchell, based on a real person?

No. Hard-nosed supervisor Vivian Mitchell (Kirsten Dunst) is a fictional character created to represent some of the unconscious bias and prejudice of the era. She is at best a composite of some of the supervisors who worked at NASA Langley

What is probably the biggest difference between the Hidden Figures movie and the true story?

"You might get the indication in the movie that these were the only people doing those jobs, when in reality we know they worked in teams, and those teams had other teams," author Margot Shetterly explained. "There were sections, branches, divisions, and they all went up to a director. There were so many people required to make this happen. ... But I understand you can't make a movie with 300 characters. It is simply not possible." -Space.com

In other words, the perceived racism these black women supposedly faced was mostly made up by Hollywood, with racist white characters invented so the screenwriters could have villains.

What’s more, as black author Shetterly [Email her] admits in the History vs. Hollywood article above, the women lionized in the movie worked in huge teams double-checking each other’s work. The premise that a few black women got us to the moon is laughable.

The true pioneers and heroes of the Space Race are being ignored simply because they were white males. After my earlier VDARE.com piece debunking the entire premise behind Hidden Figures, an anonymous reader who says he worked for NASA emailed me: "Research the name Dr. Jack Crenshaw."

So I did. And it turns out that Crenshaw, a white graduate of Alabama’s Auburn University, is basically responsible for the bulk of what Katherine G. Johnson etc. is credited with in Hidden Figures:

In order to orbit the Moon and land on it, the Apollo spacecraft’s Service Propulsion System (SPS) engine had to fire in order to slow the vehicle down and settle into lunar orbit. Delicate calculations were needed in order to ensure the orbit would not bring the craft into a collision with the lunar mountains.

Bill Michael came across a paper by Hans Lieske and Bob Bucheim of RAND Corp., who had studied the circumlunar trajectory. Michael asked Crenshaw to study it in more detail, using a computer simulation of the Restricted Three-Body Problem. The study was later expanded to include a full 3-D, N-body simulation.

Michael and Crenshaw authored the paper Trajectory Considerations for Circumlunar Missions, which was presented at the Institute of Aerospace Sciences 29th Annual Meeting in New York in Jan. of 1961.

In other words, Crenshaw laid the groundwork for Apollo. And he used a computer, not a slide rule.

But Dr. Crenshaw was just another white male. And the individual and collective accomplishments of white males are something that Hollywood, and the PTB, do not want to celebrate. Instead, we get more anti-white propaganda.

Hidden Figures is Fake History. But the anti-white Narrative that drives our entire culture is all too real.

Paul Kersey[Email him] is the author of the blog SBPDL, and has published the books SBPDL Year One, Hollywood in Blackface and Escape From Detroit, Opiate of America: College Football in Black and White and Second City Confidential: The Black Experience in Chicagoland. His latest book is The Tragic City: Birmingham 1963-2 013.