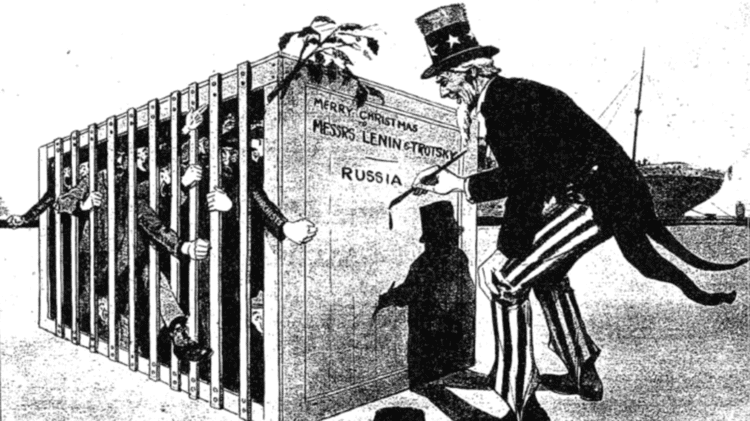 Why No "Ashcroft Raids"?

On the evening of January 2, 1920, raids by the Federal Department of Justice took place in 30 cities across the United States.

In all, the Justice Department rounded up and deported about 3,000 people as foreign agitators, bomb-throwing anarchists, Communists and generally a menace to American society.

If you've heard of the Palmer Raids at all, you've mostly heard of them as the outrageous violation of civil rights, paranoia, witch hunt, and so on.

Building on earlier immigration laws, Congress passed the Deportation Act of 1918 with three purposes in mind. This law authorized the deportation of any alien who:

[2] advocated the overthrow of the government "by force or violence"; or

[3] belonged to any organization teaching these views. For example, the Secretary of Labor eventually ruled that the Communist Party advocated violent revolution. Therefore, any alien who was a member of that organization could be deported. The Bureau of Immigration (then part of the Department of Labor) often decided who would be deported under this law.

Even though deportation matters were not normally the concern of the Department of Justice, Attorney General Palmer soon created an alliance with officials in the Bureau of Immigration to find and deport alien "reds." J. Edgar Hoover, Palmer's chief investigating officer, ordered Justice Department agents to go undercover and join suspected radical organizations.

By December 1919, Palmer, Hoover, and their allies in the Bureau of Immigration had decided to arrest alien members of the Communist Party and other foreign radicals. Hoover issued the instructions to Department of Justice agents which called for the arrests to take place during a series of raids planned for the evening of January 2, 1920.

The problem with seeing anti-Communism and the search for foreign agitators as a witch-hunt is that there are, in fact, no such things as witches. But there were, and still are, foreign agitators, terrorists, and Communists.

Back then, not only could violent strikes, rioting and shooting be traced to honest-to-God foreign agitators, but so could the assassination of President McKinley, and the bombing of the House of Morgan  on Wall Street. The bomb, which exploded on September 16, 1920, killed 33 people, and injured 400. You can still see the scars on the granite at 23 Wall Street. It may also have killed open immigration for the period of 1924-1965. Big Business finally capitulated to popular demands for immigration reform. (As Norman Matloff pointed out recently, Big Business is once again prominent among the special interests wanting immigration. So is the Higher Education lobby, which may be more difficult to crack.) This was too bad for those who wanted to come here in those years. But an online almanac shows an equally big gap in major terrorist attacks: nothing between 1920 and 1975.

One of the Palmer deportees was Emma Goldman.  In 1892 her lover Alexander Berkman had gone to jail for a botched attempt to assassinate an industrialist named Frick. In 1901 she had inspired Czolgosz to assassinate McKinley. Amazingly, it took the Government until 1919 to deport her. Sound familiar?

When she was deported in 1919, she claimed she looked up and saw the Statue of Liberty, thinking that America was behaving like Tsarist Russia, boo hoo. It wasn't. For one thing, the Tsar was dead. For another, the United States was deporting her to Moscow, not Siberia. For a third, she made herself such a nuisance to the Bolsheviks, that they subsequently deported her from Russia.

VDARE.COM does stand for traditional American rights (see our pieces on gun rights, free speech, and tyranny in general). But, like Palmer, we question whether those rights apply to aliens - especially enemy aliens.

In 1921, Attorney General Palmer told a Senate Committee that:

"I apologize for nothing that the Department of Justice has done.... I glory in it. I point with pride and enthusiasm to the results of that work; and if ... agents of the Department of Labor were a little rough and unkind ... with these alien agitators,... I think it might well be overlooked in the general good to the country."

VDARE.COM does not endorse Palmer's attitude towards police brutality, (although as a matter of fact this cavalier attitude to police brutality is also the current position of Jonah Goldberg and the Wall Street Journal). But his contention that he did good work deporting the radicals in question is certainly defensible. A little historical perspective, please: between the wars, Italy, Germany, Russia, and Japan were all taken over by radical movements. Other countries had narrow escapes.

The Constitutional Rights Foundation (email them) has a couple of worthwhile discussion questions on the Palmer Raids. I've taken them out of context, deliberately. VDARE.COM's readers may have different answers to these questions than the CRF was expecting.

Do you agree or disagree with the 1918 law that required the deportation of aliens if they believed in certain radical ideas or joined organizations that argued for the violent overthrow of the government?

Read the Fifth Amendment of the Bill of Rights. Do you think this amendment should protect only American citizens, or should it also protect aliens living in the United States?

Can you imagine any modern circumstances in the United States where a group of people are so dangerous to society that it would be justifiable to jail or deport them without due process of law?

Here are few questions of my own:

Will Attorney General John Ashcroft be able to take as firm a line with Islamic terrorists and their supporters?

Will President Bush be even willing to try?

Why have no mass deportations occurred, or even been proposed (except by the wonderful Ann Coulter)?

Will the constitutional rights of enemy aliens override justice and public safety, as they have in the past?

Here's an analogy, which relates to the question of aliens' rights and mass immigration of the last thirty years.

Some years ago, a friend of mine was objecting to the activities of the Guardian Angels in a certain neighborhood, which housed, among other things, the local lunatic asylum. He said that the Angels were trying to prevent prostitutes, drug addicts and mental cases from harassing the citizens. They were overlooking the fact that in this neighborhood, for practical purposes, prostitutes, drug addicts and mental cases were the citizens.

Point taken. David Bonior (D. Michigan), proposer of an "anti-discrimination" motion within days of 9/11, may feel the same way about his Arab-American constituents.

The question is: "How did America get that way?"