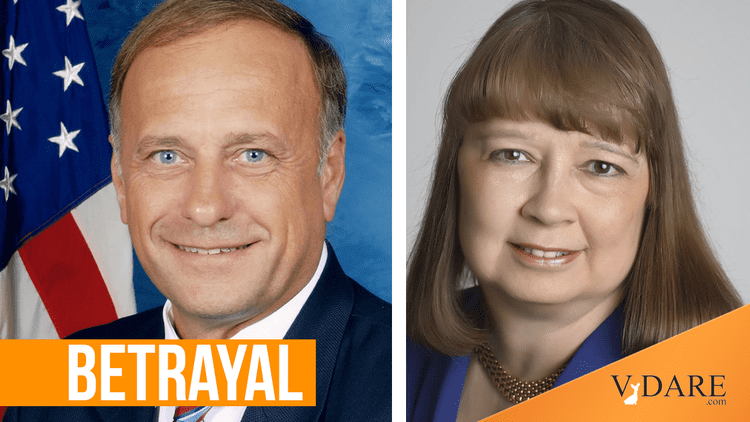 If you want to know why Sam Francis called conservatives “beautiful losers,” consider the National Right To Life Committee [NLRC], which is doing exactly what the American Catholic bishops have done for years: effectively undermining the cause of the unborn. The bishops favor Open Borders, which I oppose as a Catholic American patriot and which, as I have noted before, imports pro-abortion voters (because the current immigrant inflow votes Democrat). Similarly, in the GOP primary for Iowa 4, to be held Tuesday June 2, NRLC has endorsed unknown state Sen. Randy Feenstra, who is weak on abortion and immigration, over the incumbent, one of the Right To Life Movement’s outstanding champions: the adamantly pro-life Catholic (and immigration  patriot) U.S. Rep. Steve King.

Reason:  NRLC, a long-established Inside-The-Beltway group is toeing the Ruling Class line on King after the Democrat/ Main Stream Media complex and its compliant GOP catspaws have him branded a “racist” because he uttered the truth about Third-World immigration.

Similarly, the D.C.-based March for Life organization instantly denounced  the (white) Covington Catholic boys when a bedraggled “Native American elder,” who lyingly passed himself off as a war hero, confronted and harassed them. It only grudgingly admitted it was wrong a week later [March for Life Statement on Covington Catholic Controversy, MarchforLife.org, January 28, 2019].

In rejecting King, NRLC showed that the Covington/ March for Life fiasco hasn’t taught it a thing about media-orchestrated Leftist hit jobs—and doesn’t still accept that the Left is its mortal enemy and cannot be bought off with virtue-signaling at the expense of loyal supporters.

Obviously NRLC President Carol Tobias [Tweet her] has been in Washington D.C. too long. Her official bio even boasts, weirdly, that “in 2000 and 2004, she oversaw the efforts of NRLC’s political action committee on behalf of George W. Bush”—ignoring the fact that Bush achieved nothing for the Right To Life cause, besides being disastrous for the GOP and America.

NLRC’s endorsement of Feenstra is particularly galling. King is not just an NRLC 100-percenter. He even opposes abortion in the case of rape and incest, which NRLC does not make part of its ratings.

An excerpt from NRLC’s mash note to Feenstra:

You oppose the use of federal funds for abortion, and you oppose taxpayer funding of abortion providers.

You have been a leader in Iowa’s state Senate on life issues.

Two years ago, King did criticize NRLC for not supporting a fetal heartbeat bill [King Asks: Is Something Wrong Within National Right to Life?, SteveKing.House.gov, February 6, 2018]. NRLC did not lobby against it, but its general counsel, Conservative Inc. stalwart James Bopp Jr., [Email him] said such legislation is “counterproductive” [The surprising battle over ‘heartbeat bills’ among activists who oppose abortion, by Sarah Pulliam Bailey, Washington Post, April 12, 2019].

But that doesn’t change King’s sterling-silver vote portfolio. NRLC [Email them] would normally have buried the hatchet and endorsed him.

King’s much-denounced, allegedly “racist” but demonstrably true observations about immigration, above all his white supremacy-white civilization comment to the New York Times (he says he was misquoted and no recording exists) is being used by the Open Borders GOP Establishment as an excuse to strip King of his committee assignments and to try to defeat him in the primary.

No doubt this sort of King zinger frightened NRLC:

If we continue to abort our babies and import a replacement for them in the form of young violent men, we are supplanting our culture, our civilization.

Especially as that obvious truth provoked the rage of the Ruling Class, which must have undoubtedly terrified the NRLC Swamp dwellers:

King is only the most notorious of the politicians who have recently justified their opposition to abortion by linking it to their anti-immigration politics. Conservative lawmakers and right-wing vigilantes alike have adopted a seemingly new language for describing their antiabortion stance: the white nationalist discourse of the “great replacement,” a conspiracy theory that holds that nonwhite immigrants are demographically “replacing” whites throughout the West.

[How white nationalists aligned themselves with the antiabortion movement, by Marissa Brostoff, The Washington Post August 27, 2019]

But shorn of the abuse, WaPo’s  Brostoff had stumbled on a simple truth: The pro-life cause is inextricably linked to the National Question and to preserving the Historic American Nation—because white Christians and Catholics are the marching troops the financial backbone of the pro-life movement. When they become a minority, the pro-life cause is doomed.

NRLC would never admit that truth or its obvious corollary: King is the preferable candidate. He will not only vote against abortion itself, but also, with a career A+ from Numbers USA, vote to close the border and stop the importation of Third-World pro-abortion voters.

Feenstra, on the other hand, is a cipher on immigration:

Randy agrees with President Trump that we must secure our southern border. In the State Senate, Randy supported the law that banned sanctuary cities in Iowa and in Congress, Randy will support building the wall.

Despite his campaign’s headline, Feenstra in fact has no “results” on immigration because he is a state legislator, and voters who visit his website will find little evidence about what he might do if confronted, say, with a bill to give citizenship to illegal-alien children, end Birthright Citizenship, curtail H-1B or H-2B visas, or any other matter.

NRLC disingenuously claims it doesn’t pronounce on any issue but abortion [Muted reaction by ‘pro-family’ groups to family separations, by David Crary, Associated Press, June 22, 2018]. It “welcomes all people to join us in this great cause,” its website avers.

But if this is true, King’s unfairly-characterized remarks shouldn’t matter. Dumping King is incomprehensible unless the NRLC is in fact taking an unspoken position on something other than abortion—meaning “racism” or “white nationalism,” which the Main Stream Media gets to define, ever more expansively, and which the NRLC can’t be seen to condone without losing its place in the Respectable Right.

That might make NRLC’s managers feel good, but here’s the thing. By ignoring mass immigration and its main consequence—a stronger pro-abortion contingent in state and local office and on Capitol Hill—NRLC is taking a position: for more abortion.