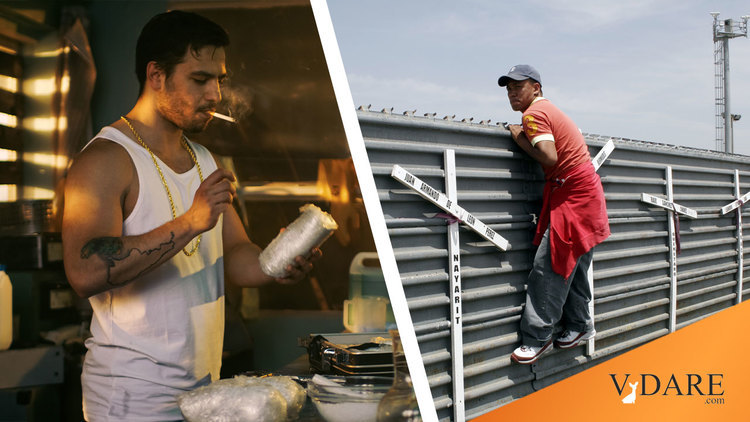 What We Really Get From Mexico

While President Bush ponders amnesty for illegal Mexican immigrants and yet another war against Iraq, the real war has already come here—from Mexico.

The New York Times reported last week ["A Georgia Pipeline for Drugs and Immigrants," by Tim Golden, NYT, November 16, 2002"] that in areas where Mexican immigrants were supposed to bring the vaunted "cheap labor" that would save American industries, what they've really imported is cheap drugs—and plenty of them.

The story centered on Dalton, Ga., a small textile manufacturing center just across the state line from Chattanooga and where immigrants from Mexico have flocked in recent years to take jobs in the local sock and carpet mills.

Now, with the country in recession, many of the jobs have vanished, but the Mexicans remain—and they make up for lost wages by pushing narcotics.

"In Dalton and surrounding areas," the Times reports, "drug arrests have steadily risen since the late 1990s, police officials say. Gang-related violence has become common" in an area that last saw major violence around the time of Sherman's march to Atlanta. "We keep arresting people and seizing drugs, but they just keep coming," the local police chief moans. "We're in a boat with a big hole. We can keep bailing, but the hole's still there."

Of course the hole's still there, and it will always be there as long as mass immigration is permitted—which is to say, as long as Big Business interests demand the cheap labor it provides.

Even as his town and region are poisoned by the immigrant drug-dealers, ex-Rep. Erwin Mitchell beams that "this is a place where not one American job has been lost to immigrant workers." That, of course, is a boldfaced lie. The textile czars round up Mexican workers themselves because they can rid their plants of higher-wage Americans, but even if it were true, what good are "American jobs" if they're filled by foreigners and the society disintegrates because of the drugs, murders and gangs the aliens import?

"Dalton," the Times assures us,

"is by no means alone…From Alaska to South Carolina, law enforcement officials said, Mexican traffickers have taken advantage of spreading Mexican immigration and freer North American trade to establish themselves as the dominant wholesale suppliers of illegal drugs across much of the United States."

Like the terrorists of Sept. 11, the Mexican drug peddlers can flourish because mass immigration has created an alternative society in which they can live, hide, and operate. The Dalton police force has a grand total of one officer who can even speak Spanish and has "almost no capacity to infiltrate tight-knit Mexican criminal groups."

"The chances of these people getting caught are now somewhere between slim and none," the local chief told the Times.

Just as Islamic terrorists make use of the religious, linguistic and cultural "diversity" their own immigrant communities create in this country, so the Mexicans also create their own internal social structures that are almost impossible for police to detect and investigate.

Mass immigration by itself isn't the only reason for the drug deluge from across the Rio Grande. There's also the contribution of the vaunted North American Free Trade Agreement—NAFTA.

"Like the legitimate businessmen energized by the loosening of North American trade," the Times reports, "the traffickers have found new economies of scale, taken advantage of the freer movement of Mexican trucking into the United States and even shifted some production closer to consumers."

The two major superstitions of the last decade—that mass immigration and free trade and the "diversity" and "globalization" they bring are progress—smash apart on the hard truths about the new multinational narcotics industry.

How much longer the Open Borders lobby, its pet politicians and hired ideologues, and the Big Business interests that welcome any displacement of American workers and any destruction of American culture and social fabric if it rakes up enough dollars, how much longer they can keep pretending that the monsters they've created are the blessings for the country they claim they are isn't clear.

If 3,000 dead Americans in the World Trade Center, murdered by alien terrorists who entered the country legally are not too many lives to lose, why should the swamping by drugs and murder of northern Georgia, eastern Tennessee, western North Carolina and all the rest of the nation "from Alaska to South Carolina" be too high a price to pay for the glories that "cheap labor" brings us?

What is happening in Dalton and its environs merely reminds those Americans who still have not lost all their mental marbles that opening your borders to millions of aliens who share nothing with your own society and people is an invitation to national suicide.

If those who forced the gates open won't close them, those who have to live with what comes across will have to close them themselves.

[A selection of Sam Francis' columns, America Extinguished: Mass Immigration And The Disintegration Of American Culture, is now available from Americans For Immigration Control.]