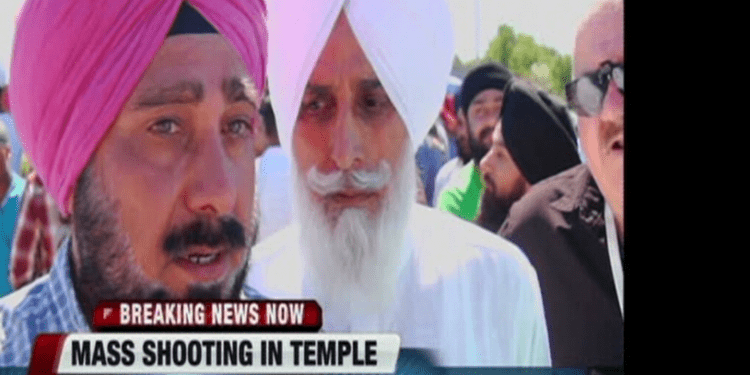 In the wake of the August 5 shootings at the Wisconsin Sikh temple, it is of course necessary to stipulate that VDARE.com is definitely opposed to murder.

It’s necessary because of the Left/ Main Stream Media’s unscrupulous determination to suppress all political opposition by smearing it with these tragedies—part of the totalitarian reflex fundamental to Cultural Marxism, leading to atrocities like the wholly false allegations that Jared Taylor’s American Renaissance was implicated in the 2011 Arizona/ Gabrielle Giffords shooting or that the Aurora CO “Dark Knight” killer was a member of the Tea Party.

It’s also necessary to stipulate, because you won’t see this in the MSM, that what happened in Oak Grove is far overshadowed by mass killings perpetrated by immigrants—often of other immigrants—the curious and ongoing phenomenon that VDARE.com calls Immigrant Mass Murder Syndrome. At our most recent count, it involves at least 48 incidents and 411 deaths over 30 years.

This astonishing record would be whooped up as a Trend if the MSM were not so Politically Correct. Instead, immigrant mass murders go straight down the Orwellian Memory Hole. For example, who remembers that seven students at an Oakland CA visa mill college were killed (i.e. more than at Oak Grove) by a Korean immigrant just this last April?

Finally, let’s stipulate that the MSM may have finally found its Great Brownshirt Defendant: Wade Michael Page, the alleged killer, appears to have been connected to the neo/crypto Nazi underground.

Law enforcement authorities have been commendably cautious in speculating about Page’s motive, although of course the MSM isn’t listening to them. But Page’s life appears to have been a particularly sad one—he lost his mother as a child and his father’s remarriage ended in divorce—characterized by the meaningless chaos that Charles Murray tells us is increasingly typical of America’s white working class. Dr. Keith Ablow has bravely speculated that

Many, many people—regrettably—harbor racist, even extremist views and don't walk into buildings intent on carnage.

As could be the case with Colorado shooter James Holmes, mental illness, combined with our broken mental health care system, may turn out to be the culprit in Wisconsin.

Did mental illness fuel Wisconsin massacre — or was it terrorism?, Foxnews.com, August 7, 2012

For that matter, every one of the four (count them, 4) alleged white supremacists involved in killings since 1995—Timothy McVeigh (who may actually have been a species of libertarian looney) James von Brunn, J.T. Ready (who seems to have been involved in a family dispute), and now Wade Michael Page—had served in the military. Does that mean the U.S. armed services are suspect?

Having said all this, a tragedy of this type is like a lightning flash. It exposes things that Americans may not know are going on.

Important questions that the MSM is not asking:

When VDARE.com’s James Fulford heard about the shootings, he posted from his iPhone: “We don't even know the guy's name, but we know his race, and a witness is allowed to attribute a motive to him accordingly.” The MSM now uncritically accepts that the motive that drove the Sikh Temple gunman was white racism, but it always searches for alternative explanations for non-white attacks on whites.

The Sikh Temple of WI was established on October 1, 1997. It started with 20-25 families and the Sangat gathered in the rental community halls in the south side of Milwaukee…At this time there are 350-400 people in the congregation. [Link added]

Why this extraordinary growth? A victim’s story is explanatory:

Suveg Singh Khattra was a constant presence at the temple. Most days, his son, a taxi driver, would drop him off there to pray.

Khattra and his wife moved to the United States eight years ago to join their son. On Sunday, the 84-year-old former farmer from northern India was shot and killed.

"He don't have hatred for anybody. He loved to live here," said son Baljinder Khattra, who moved from the family's farm in Patiala, a city in Punjab, in 1994….

The elder Khattra spoke no English, communicating instead with neighbors and friends with his hands.

The obvious questions, unasked by AP:

Also in the AP story, but also unquestioned:

Prakash Singh's wife and teenage children were living in the temple. Recently, they had moved from India to join the Sikh priest in Wisconsin….Singh's son and daughter will start school soon; the daughter is in high school and the son is going to be a freshman in high school.

My emphases. Was this a temple or a bridgehead? What about zoning?

Contrary to the impression given by MSM eulogies and despite their beards, Sikhs are not Amish—they are a pretty tough lot. (See here for the opinion of “An Indian-American Reader.”) In fact, they’ve been involved in a couple of Immigrant Mass Murders themselves—see here and here. And see here for a devastating account of Sikh organized crime and terrorism in Canada.

This does not mean, of course, that Sikhs should be shot by Americans. But it does mean that maybe they should not be welcomed so credulously by Americans either.

After the shooting, the Los Angeles Times lamented:

[T]he FBI is prohibited under federal law from collecting information on U.S. citizens not suspected of committing a crime. In order to open a domestic terrorism investigation, FBI agents must believe a suspect has threatened violence, has broken federal law and is trying to advance a political or social agenda.

In fact, the story reported the startling news that federal investigators had indeed “looked at” this extremely obscure figure (why?), but could find insufficient evidence of wrongdoing to justify an investigation.

And there are of course all kinds of irritating civil-libertarian reasons for this wimpy restriction that restrained the Feds.

But not to worry! Private enterprise has provided not one but several shadow political police forces eager to fill the gap. The LA Times happily boosted two of them:

Both the Anti-Defamation League and the Southern Poverty Law Center had tracked Page for several years. The nonprofit organizations collect publicly available information on hate groups from Web forums, pamphlets and other sources. [VDARE.com links added]

In 2000, the Southern Poverty Law Center has found that Page also attempted to purchase goods from the neo-Nazi National Alliance, then America's most important hate group.

How can Beirich and Potok possibly know this?—unless they have somehow “hacked” (to use the term that has brought down the UK News of the World and threatens Rupert Murdoch’s empire) National Alliance’s records?

Similarly, the ADL boasted after the Arizona shootings appeared to indicate that it has the capability to crack internet pseudonyms—quite possibly in a working alliance, as a reader pointed out, with the FBI.

It’s long been a joke that violence in a cause of which the Left approves is immediately exculpated with the demand that its “root causes” be considered.

When are we going to hear about the “root causes” of the Wisconsin shootings?

For example, Page, obviously a man of limited economic potential, worked as a trucker in civilian life. Trucking and taxi driving are two trades in which Sikhs are disproportionately represented. Has it not occurred to any MSM pundit that sheer American worker displacement might be a factor in this tragedy?

Which means we'll be seeing it again?