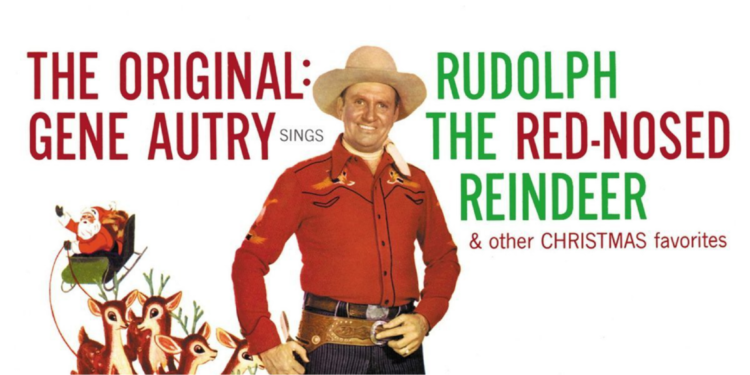 By the time Gene Autry recorded "Rudolph the Red-Nosed Reindeer" in 1949, he was already a huge star.

In fact, few realize that Autry was a star long before his first feature film, the 1934 release, "In Old Santa Fe."

Although Autry is most well known as a crooning cowboy, he cut 635 recordings over his career including more than 300 songs written or co-written by him.

From that moment on, things happened fast for Autry. In 1929, Columbia Records signed Autry to an exclusive contract.

Autry scored his first major hit—a gold record—in 1932 with "That Silver-Haired Daddy of Mine."

Autry's recordings sold more than 100 million copies and earned him more than a dozen gold and platinum records, including the first record ever certified gold.

As Frank Sinatra once said about his life-long friend, "Gene Autry did singing the hard way—while riding a horse!"

During the Christmas season radio stations play dozens of versions of "Rudolph the Red-Nosed Reindeer" but Autry's is the original.

The story of how Rudolph became "the most famous reindeer of all" and how the Singing Cowboy decided to take a chance on the very unusual tune merits retelling.

In 1939, Chicago-based Montgomery Ward, a retail department store chain, was looking for a promotional gimmick.

One of the staff copywriters, Robert May, invented Rudolph. May based his character, in part, on himself—an underdog outcast mocked by his peers.

Even though Montgomery Ward management was hesitant about marketing a "red-nosed" character because of the possible connotations of drunkenness, May prevailed.

But Marks' song was quite different from May's story. In the song, Rudolph did live at the North Pole and was not one of Santa's team.

Santa, according to Marks' version, happened upon Rudolph by accident when he noticed his glowing nose while making a delivery.

Since the fog was thickening, Santa asked Rudolph to lead his team to for the rest of the evening to avoid accidents and delays.

Since Rudolph was a responsible reindeer, he readily agreed.

Many well-established singers, including Autry, turned down the opportunity to record the musical version of "Rudolph the Red-Nosed Reindeer."

And the rest, as they say, is history.

Time has dimmed Autry's contributions not only to music, television and movies but also to America.

For the fifteen years between 1940 to 1956, America tuned into Autry's weekly Melody Ranch radio show. And when Autry toured, he played before sell-out crowds. Never one to sell his fans short, Autry put on two shows a day, seven days a week for up to 85 consecutive days. Autry was the first performer to sell out Madison Square Garden.

Autry's patriotism is legendary. After joining the Army Air Corps in 1942, Sgt. Gene Autry ferried fuel, arms and ammunition throughout the China-India-Burma Theater.

After the war ended Autry, who could have resumed his movie career, instead joined Special Services to tour with a USO troupe in the South Pacific.

Autry is the only entertainer to have five stars on Hollywood's Walk of Fame: one each for live performances, radio, recordings, movies and television.

At the peak of his career, Autry was as big as Clark Gable.

But Autry never let fame go to his head.

In 1997, on the occasion of Autry's 90th birthday at the Gene Autry Museum, Marty Stuart, the country artist and president of the Country Music Foundation, said:

"As a performer, songwriter and guitar player, Gene Autry is a study in staying power. The trends have come and gone around him but he's remained steady and true."

The Autry story is remains compelling today because of his huge influence on so many aspects of the entertainment industry...and for introducing generations of Americans to "Rudolph the Red-Nosed Reindeer."