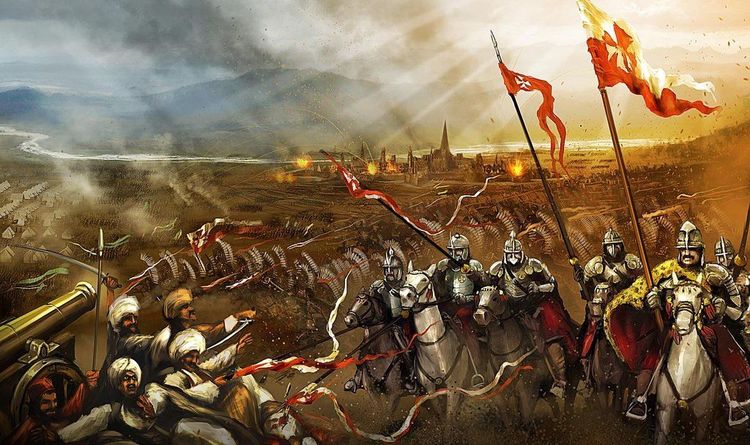 "It is in Turkey's economic interest to be part of Europe. It is also in the interest of the Muslim world that an Islamic nation such as Turkey is within the European Union, as a Trojan horse…Admitting Turkey into European Union is like an attempt to transplant a human organ into a body of another person with a different blood group, and they never have any biological compatibility."—Libyan dictator Muammar Gaddafi, on his website.

From the stone corridors of ancient cathedral priories to jungle chapels in Asia and betting pools in newsrooms around the world, the speculation increases daily: who will succeed the ailing Pope John Paul II?

Personally, I'm rooting for Arinze—the first black pope would get a free pass from the leftist media for several years. His sheer exoticism would permit this solidly orthodox cleric to clean house. [VDARE.COM NOTE: Some readers may disagree. Please complain to John Zmirak—not us!]

But if any of these three were elected—or indeed, any bishop from Asia or Africa—the Vatican's recent line favoring virtually open borders will be re-examined, at least when it comes to Islamic immigration.

Indeed, in the waning days of this great papacy, there have been unmistakable signs that the Holy See has begun to wake up and smell the Turkish coffee.

In October, the Vatican approved for publication in the elite journal La Civilta Cattolica a scathing piece by a Jesuit historian on Islamic treatment of Christians, chronicling the genocidal conquests and grinding persecutions which Moslems used to build the "House of Islam," right up to the present (see Sudan, Kosovo, Indonesia, Pakistan…).

And this past summer, the Vatican canonized the Capuchin friar Marco d'Aviano, a sort of proto-restrictionist who played a critical role in the defense of Vienna against Ottoman invaders in 1683.

Turkish armies had conquered Hungary, Serbia, Romania, and Bulgaria—imposing viciously discriminatory anti-Christian taxes, and kidnapping thousands of Christian children for military slavery as "janissaries." They stood encamped before the gates of the last Christian power that could resist them: the disorganized and demoralized Habsburg empire, and its admixture of Protestant allies, led by the Emperor Leopold I.

Saint Marco spent weeks exhorting Leopold and other Christian warlords to fight and helping them arrange the defenses. He rode through their sullen troops holding aloft a crucifix, preaching a crusade. Disdaining bullets and cannon, he rode among the troops during the battle, instilling hope—which was fulfilled when the great Polish King Jan Sobieski (let's canonize him, too!) arrived with reinforcements, lifted the siege, and ended the Ottoman threat to Central Europe.

Folklore tells that the bags of coffee left behind by the fleeing Turks were made into "cappuccino," in honor of the Capuchin crusader. Another story claims that Viennese bakers made the first "croissants" in genial mockery of the banished Turkish crescent flag.

When the Pope canonizes someone, he does more than put a smiley face beside the man's name in the Vatican archives. Catholics believe that he employs the full force of infallibility, declaring that from this day forward it is known with certainty that this man is indeed in Heaven, and that his prayers may be invoked by the faithful, since he enjoys the eternal presence of God.

At least one British paper, The Independent, joined liberal Italians in carping at this Vatican decision. But many secular Europeans have developed unsteady nerves at the prospect of Turkish entry into the borderless European Union. As loyal a son of the Jacobins as Giscard d'Estaing has warned against the admission of Turkey to the EU. He knows it would mean advancing the frontier of Europe to the Caucuses and the uncontrollable borders that Turkey shares with Iraq, Syria, and Iran.

Just as a trip across the Rio Grande allows any Central American access to Portland, Bangor and Miami, so a night's flight into Turkey could put any ambitious (or terror-minded) Middle-Easterner on the next bus to Paris or Brussels.

This prospect might be less disturbing to liberal Europeans if they really believed their propaganda—the carefully treasured myth that Turkey is a secular Islamic success story, proving that this ancient warlike desert creed is perfectly compatible with modern, multi-religious civilization. In fact, however, as Serge Trifkovic documents in his indispensable The Sword of the Prophet, the secularism of the Turkish state—imposed in the 1920s by the brutal but effective Kemal Ataturk—enjoys support from only a small, urbanized elite, protected from Islamist majorities by sheer force.

Simple repression makes modern life marginally livable in Turkey (except for Kurds). But this would be swept away if Turkey adopted real democracy, a sine qua non for joining Europe. Recent gains of Islamist parties in (carefully-controlled) Turkish elections drive this point home—at least to the Vatican, which in late May 2003 expressed its own doubts about Turkish admission to the EU.

Without abandoning its official attitude of respect for the private beliefs of individual Moslems—whose vigorous faith must bring back memories of Christendom before 1789—the Vatican clearly is worried about these people forming ghettoes in the ancient capitals of Christendom, and organizing to someday impose Sharia on Tours, Venice and Rome.

Indeed, Turkey has already begun trying to impose its alien will on the EU. On July 2, Turkey's Prime Minister Recep Tayyip Erdogan demanded that the EU constitution, then being drafted, omit any reference to Christianity. The Vatican had been calling for the EU to recognize the faith that transformed the continent from a mass of barbarians into a unitary civilization. But the Turkish position seems likely to prevail.

The Holy See gets too many reports each day from its missionaries in Sudan, Indonesia, and Pakistan to be naïve about the behavior of Islamic governments in power. It knows its theology well enough to realize that Islam cannot, by its very nature, adopt an attitude of lasting tolerance towards "unbelievers"—not even towards Christians and Jews, who were and are routinely taxed to death, subjugated, slaughtered, driven out or forced to convert, in the ongoing campaign to conquer the planet for Islam. (As Trifkovic and Bat Ye'or demonstrate, the brief periods of tolerance for "peoples of the book" about which Islamophiles love to write were short respites from the general rule.)

The Church remembers how regularly Moslems revert to type, heeding Mohammed, who told them: "Kill the unbeliever wherever you find him."

As a Catholic immigration reformer, I predict that, as churchmen recognize the dangers of an Islamic influx into the West, they'll be forced to revise their irresponsible statements about emigrants' inherent "right" to move to the country of their choice, regardless of its laws, interests, or cultural cohesion.

Of course, many churchmen will continue to promote mass immigration, legal and illegal, of Hispanics into the U.S. But their arguments will stand exposed, based on no principle apart from short-term ecclesiastical self-interest.

Of course, alas, the Church's recent tragic sex scandals show just how powerful and short-sighted a force that can be.

But once the general imaginary right to citizenship-on-demand is debunked, the religious case for open borders collapses.

I believe it will be replaced by the traditional teaching: that it is the duty of the state, at its own prudential discretion, to regulate immigration for the common good.

The Church can and must urge that this secular authority be employed with justice and humanity. But it has no authority to frustrate it.

As the founder of a well-known religion once told us: "Render unto Caesar what is Caesar's, and unto God what is God's."

John Zmirak [email him] [and read his blog] is the author of Wilhelm Röpke: Swiss Localist, Global Economist.