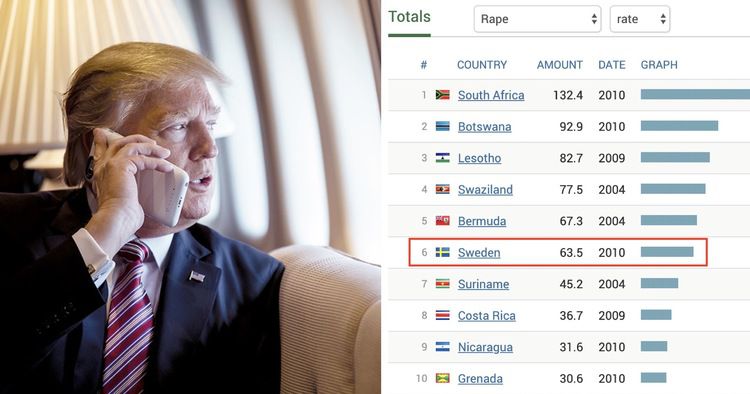 Sweden never seems far from President Trump’s mind, the latest example being his successful push to get rapper A$AP Rocky (Rakim Mayers) out of a Swedish jail after the hefty musician’s street brawl with some seriously swarthy “Swedes.” [U.S. Told Sweden Keeping ASAP Rocky in Prison Could Cause ‘Negative Consequences,’ The New York Times, August 4, 2019] They were about as Swedish as Saddam Hussein, but the story gave Social Democrat Prime Minister Stefan Löfven the chance to crow about refusing “special treatment” for the American celebrity. [Swedish prime minister says A$AP Rocky won't get special treatment, by Zack Budryk, The Hill, July 17, 2019] Take that, Orange Hitler! Löfven can toot his bockhorn all he wants, but the truth is that criminal Muslims are waging a campaign of street terror that Politically Correct Swedish authorities are ignoring.

As Steve Sailer noted here recently, the epitome of smiley-faced socialism is suffering a wave of bombing attacks that are unusual for a nation not at war. From 2011 through December 5, 2018, data from Swedish Public Service TV show, police recorded 116 hand grenade attacks. That’s an average of more than one a month every month.

Explosions are the new normal. An example is the bombing of an apartment complex in the normally sleepy university city of Linköping on June 19, that was reportedly the fallout from a beef between immigrant gangs: Twenty-five people were hurt and 250 apartments were damaged. Even worse, the cops didn’t arrest anyone. [It’s Time for Sweden to Admit Explosions Are a National Emergency, by Paulina Neuding, Quillette, June 11, 2019]

For some time, VDARE.com has tracked the intensifying violence in once-peaceful Sweden, which suffered riots in 2008, 2010, 2013, 2016, and 2017 thanks to its indigestible Islamic guests.

The last one, in Rinkeby, inspired some choice commentary from Trump, which in turn caused former Swedish Prime Minister Carl Bildt—a “conservative” of the country’s Moderate Party—to return fire with incredulous, rhetorical questions. The American Main Stream Media pounced. Trump was a liar and an idiot, they claimed, and possibly to blame. Incredibly, though several officers were injured and forced to fire on the masked rioters, the violence also ended with no arrests. [No arrests after Rinkeby riots, The Local, February 22, 2017]

And this was far from Rinkeby’s first. In 2010, “Little Mogadishu,” as Rinkeby is known, went wild. Rioters stoned the cops. Three years later, the northern sky, including Husby, was once again ablaze. Rioters sported distinctly non-Scandinavian features.

Here’s what the MSM won’t tell you: Sweden’s crime crisis is demographic. The three most violent cities in the kingdom—Stockholm, Gothenburg, and Malmö—are becoming more foreign and less Swedish every day.

Stockholm, population 910,000, is home to 16,400 Iraqis and 11,600 Iranians. Fifteen percent of the capital’s population, 136,500, was born outside the country [Stockholm Population, World Population Review]. It suffered 46 hand grenade attacks between 2011 and 2018, the data from Stockholm public television show.

Gritty and industrial Gothenburg is even more foreign. Of 581,822 people, 140,000 are foreign-born and hail from such peaceful precincts as Iraq, Iran, and Somalia. [Gothenburg Population 2019, World Population Review] That’s 24.1 percent. Gothenburg dealt with 13 grenade attacks.

Then there’s Malmö. Forty-three percent of the city’s residents are foreign-born or have non-Swedish ancestry. Of the city’s 341,000 people, 135,000—39 percent—are ethnic minorities; 100,000 are outright foreigners, most of them Iraqis [Malmo Population, 2019, World Population Review]. Malmö suffered 27 hand grenade attacks between 2011 and 2018.

As one of them, music promoter Ram Alnashimi, frankly told journalist Richard Orange: “You can’t compare Iraqis with the Chileans and Iranians.” They tend to be better educated and more integrated.  [Years after finding refuge, Iraqis struggle in Malmö, by DW Akademie, October 21, 2015]

So then why are they in Sweden in the first place?

Because of the long electoral hegemony of the Social Democratic Party—very similar to the Democrats’ hegemony under Franklin D. Roosevelt and Truman. The SDP positioned Sweden as a “moral superpower” that embraced refugees and immigrants of all colors, and then invited them to enjoy one of the largest and most generous welfare states in the world.

In foreign policy, Sweden backed Communist and pan-Africanist movements. Social Democrat Foreign Minister Torsten Nilsson once admitted that his country had sent $550,000 to the Viet Cong and its communist allies in Laos and Cambodia. [Why did Sweden support the Viet Cong? History.net]  Some $443 million was funneled to the African National Congress. [Billions of Swedish Krona Supported the Struggle against Apartheid, by Ida Karlsson, Inter Press Service News Agency, February 2, 2019] Yes, Swedish taxpayers probably funded necklacing and political terrorism.

Now, in 2019, Swedes is paying the price for this moral preening. They suffer more fatal shootings per capita than either Norway or Germany, and those deadly shootings increased concomitantly with hand grenade attacks. [Why Sweden has more fatal shootings per capita than Norway and Germany, The Local, Sept. 5, 2017] The going street price for five AK-47 rifles is 890 pounds, (about $1,100). [Violent crime in Sweden is soaring. When will politicians act?, Spectator [UK], February 10, 2018] Often, gun merchants based in the Balkans toss in free hand grenades with each purchase.

Organized gangs like the Iraqi and Iranian Black Cobras, or the mostly African and Hispanic Werewolf Legion, account for most of the violence. [Violent Extremism and Organized Crime, Institute for Future Studies, November 12, 2018]

Another telling datum: 15,244 known extremists are in the country.  [‘Astonishing findings’ in new Swedish report on extremism and organized crime, The Local, November 12, 2018] Most of these criminals, 5,693, were in biker gangs. Another 5,094 “were associated with criminal networks in socially deprived areas," The Local reported, while “some 835 people were considered to have direct links with football firms and 785 people with Islamist groups.”

But here’s the money quote:

The “typical” offender behind these crimes, was found to be around 19 years old, and 92 percent of them were men. As many as 67 percent of them were also born in Sweden, although a majority of them have roots in other countries via for example their parents [emphasis added].

And 2019 might well be the most violent year yet. Between January and March, 50 explosions were reported across Sweden. [Fler sprängningar i år (More Blasts This Year), by Hewa Abdelzadeh, Sverige Radio, April 15, 2019] Unsurprisingly, a third of Swedish women, the National Council for Crime Prevention reported, feel “unsafe” about going out at night. [Nationella trygghetsundersökningen (National Security Survey), Brå.se]

Sadly, the Swedish state is doing everything in its power to make the situation worse. Swedish politicians think welfare and education handouts will stem the crime wave. In 2016, Anna Sjöstrand, a municipal coordinator against violent extremism, backed welfare and housing subsidies for returning ISIS terrorists. [Swedish city to offer returning Isis fighters housing and benefits in reintegration programme, by Lizzie Dearden, The Independent, October 20, 2016]

Some 300 “Swedes” have traveled to the Middle East to fight for jihadist organizations. Yet few if any have been prosecuted. [How Sweden Deals With Returning ISIS Fighters, by Jonas Grönvik, March 26, 2019]

In 2014, Sweden spent 17 billion euros ($19 billion) on college students, DW Akademie reported. Sweden also gave out 15 billion euros in student loans. Is all that money helping integrate Iraqis, Somalis, and Afghanis? It sure doesn’t look like it.

What’s to be done? A hint is found here: publicity and profiling. (“When they attack in masses, they must also be controlled in masses”—Chairman of the Federal German Police Union Ernst Walter) [See No Evil, by Paulina Neuding, Washington Examiner,  January 20, 2017]

Restraints that stop police from doing basic police work, such as the 2016 mandate that forbids reporting on the race of suspects, must be lifted. [Swedish police banned from describing criminals anymore in case they sound racist, by Emma Henderson, The Independent, January, 14, 2016]

The diversicrats responsible for the multi-year cover-up of immigrant-led sexual assaults and rapes at the Bravalla Music Festival must be fired, and officials who want to protect Swedes should replace them. [2018 Swedish Music Festival Cancelled After Sexual Assault Reports At This Year’s Event, by Dominique Mosbergen, HuffPost, July 2, 2017]

More Swedish cops would help, too. Sweden has long had one of the smallest police forces in the European Union. But thanks to immigration, those days are over.

Tougher sentencing is another must. No sane country should give a piddling three years of institutional care to someone guilty of an execution-style murder. [Stockholm shooting: One dead as gunman storms pizza restaurant, by Joshua Nevett, Daily Star, January 8, 2018] Sweden should bring back the death penalty, or at least send gangster gunmen and bomb throwers to prison for life.

Swedish patriots must build a serious party that promotes immigration restriction and targeted deportations. Despite their breakthrough at the polls, I am personally skeptical that the Sweden Democrats can overcome the “neo-Nazi” smear, but why doesn’t King Carl XVI Gustaf demand law and order and an end to Open Borders. What are monarchies for?

Finally, Swedes must continue fighting their own government. They must continue to veto the return of jihadis to their towns and villages, and they should threaten tax protests until Stockholm takes the migrant crime wave seriously. [Swedish town votes to turn away returning Isis fighters (even though none ever left it), by Richard Orange, The Local, March 22, 2019]

Because if Sweden doesn’t stop the Muslim invasion, it is—as Somali immigrant and Christian convert Mona Walter has warned—doomed.