Donald Trump was visibly seething as Hillary Clinton and her pet journalists “moderating” the second presidential debate piled on. In what was turning into more of a roast than a debate, it looked like we were going to get 90 minutes of Trump being hammered for talking bawdy in a private conversation more than a decade ago. 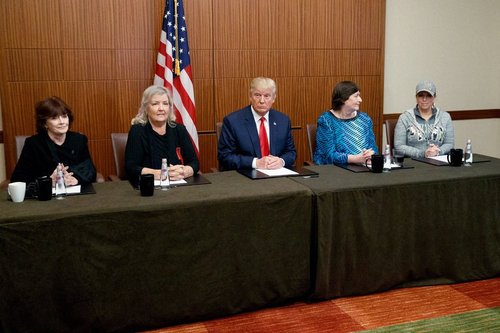 And then Trump unleashed. In a performance his supporters have been begging him for, he rescued his campaign with a savage attack on Hillary Clinton’s corruption, incompetence, and enabling of her husband’s sexual misdeeds by attacking his female victims. The visual of women who have accused Bill Clinton of sexual assault was a powerful optic to counter the faux outrage about Trump’s dirty talk [Trump wanted to put Bill Clinton’s accusers in his family box. Debate officials said no., by Robert Costa, Dan Balz, and Philip Rucker, Washington Post, October 10, 2016].

It was what Trump needed. But it’s not enough to secure victory. Once again, incredibly, immigration was not the dominant issue at the presidential debate. Trump can hardly be faulted for failing to bring up the subject more than he did: he was forced to counterattack in every direction. The responsibility for suppressing the immigration debate lies with the Lying Press.

Which is especially unforgivable in light of last weekend’s revelations from Wikileaks that Hillary Clinton does in fact favor explicit “open borders.” She can hardly be expected to admit this, because, as we also learned in these documents, she openly says it’s important to have both a “private and a public position” [‘Honest Abe never lied. That’s the difference between him and you.’ Trump’s explosive attack on Clinton over her leaked speech about different ‘public and private positions,’ by Geoff Earle, Daily Mail, October 10, 2016].

The Clinton campaign is trying to claim that Hillary’s Open Borders remark really applied to “energy policy,” but this questionable claim will not bear up under even slight scrutiny. And, of course, she’s already endorsed, if only to black and Hispanic journalists, the Full Merkel.

It seems like ages ago, before the revelation of the Trump tape, but it was actually only late last month when the Clinton campaign seemingly committed itself to the radical position that the entire world has the right to move to the United States:

Donald Trump had said, "We want people to come into our country, but they have to come in legally, through a process… No one has a right to immigrate to this country. It is the job of a responsible government to admit only those who expect to succeed and flourish here and really be proud of what they've done and where they came from. They have to love our country."

In that quote was the fundamental principle: There is no right to immigrate to the United States.

Shortly after Trump's speech, the Clinton campaign in Ohio tweeted out the story of a Libyan who came to the Unites States on a student visa in 1994, was not able to renew it, and simply stayed in the country illegally. He didn't exactly live in the shadows, settling in Dayton and founding the Islamic Federation of Ohio and the Islamic Center for Peace. After two decades, he received permanent residency in 2015. In the story, headlined "Donald Trump would have kicked my family out of the country," the man's son, whose name was given as Mohamed G., wrote, "There was no way that I could let a person that disrespects my father and other immigrants win the White House."

On Monday, the Clinton Ohio campaign tweeted Mohamed G.'s picture with Trump's quote, "No one has the right to immigrate to this country." The campaign added the comment: "We disagree."

But Clinton does not have to worry about the Main Stream Media. Not only was she never questioned on her immigration policy, “immigrants” were only brought up as one of the official victim groups Donald Trump had supposedly insulted. 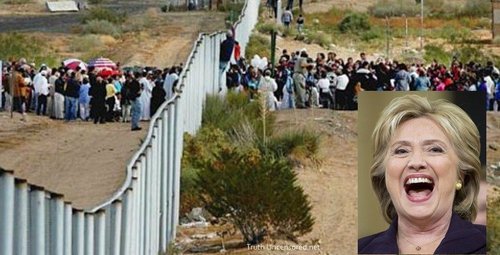 The only real discussion of immigration policy came up when Trump managed to attack Clinton’s proposed expansion of the Syrian refugee program. Trump explained his proposed ban on Muslim immigration (which should obviously take place) as simply “extreme vetting” of refugees coming from places like Syria.

“People are coming into our country, we have no idea who they are, where they are from, what their feelings about this country is, and she wants 550 percent more,” Trump said. “This is going to be the great Trojan horse of all time. We have enough problems in this country.”

Trump also slammed the Gulf States for doing nothing to solve the problems even though they have “nothing but money.”

This led to one of the few challenging questions Clinton received during the event: moderator Martha Raddatz (who was openly arguing with Trump at other points in the debate) asked Hillary Clinton why she was willing to “take the risk of having those refugees come into the country” even though Clinton knew the vetting system wasn’t perfect.

Incredibly, Clinton said it was because she saw a distressing picture:

Well, first of all, I will not let anyone into our country that I think poses a risk to us. But there are a lot of refugees, women and children — think of that picture we all saw of that 4-year-old boy with the blood on his forehead because he'd been bombed by the Russian and Syrian air forces.

[Everything that was said at the second Donald Trump vs. Hillary Clinton debate, highlighted, by Aaron Blake, Washington Post, October 9, 2016]

Yet we know Hillary Clinton doesn’t really believe the vetting system will safeguard the United States. She actually expressed concerns about terrorists infiltrating waves of refugees in a private speech which netted her $400,000 from a Jewish group. Specifically, she argued Jordan and Turkey wouldn’t be able to tell terrorists from “legitimate refugees” .[Hillary Worried About Jihadists Entering With Refugees In Private Speech, by Alex Pfeiffer, Daily Caller, October 10, 2016].

And FBI Director James Comey has admitted our own government can’t effectively vet Syrian refugees because American law enforcement has no access to Syrian databases nor sufficient human intelligence.

However, as with building border walls, the American government apparently believes pipsqueak polities like Jordan have the right to determine who can and cannot enter the country—but the “sole superpower” does not [The Great Wall of Jordan: How the US Wants To Keep the Islamic State Out, by William M. Arkin, Vice, February 24, 2016].

She wants Amnesty for everybody. [This was the debate’s one (1) mention of Amnesty]. Come right in. Come right over. It's a horrible thing she's doing. She's got bad judgment, and honestly, so bad that she should never be president of the United States. That I can tell you. 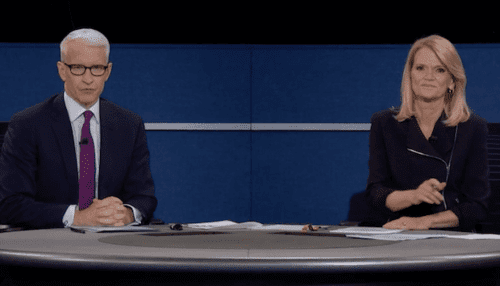 Needless to say, the moderators promptly Moved On so that Clinton did not have to defend her immigration position.

As she implicitly recognizes by concealing her “Open Borders” position, Hillary Clinton knows her immigration policy is indefensible. And the Main Stream Media is conspiring to make sure she doesn’t have to defend it.

Trump is a good counter-puncher but he’s out of time to rebut all the ridiculous charges and outrageous accusations against him.

Trump must turn the election into a simple question. America as a nation—yes or no?

Hillary Clinton’s election would ensure the de facto abolition of American sovereignty and the permanent dispossession of the historic American nation.

Only Donald Trump can prevent this from happening.

That is the issue of the 2016 campaign. And it’s something which desperately needs to be discussed—no matter how hard the Lying Press tries to suppress it.