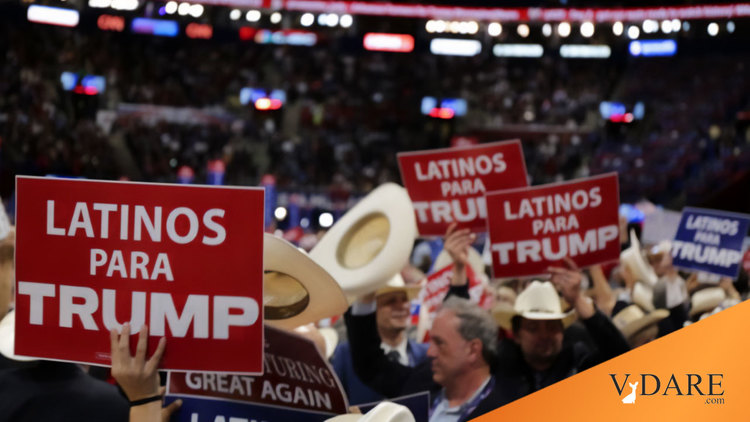 I’ve written a lot about Republicans’ obsession with Hispanics and how I believe it’s completely counterproductive to take the popular Hispandering route.

I will acknowledge some caveats though. The improvements Republicans made in 2020 with Hispanics in Texas border counties did catch my attention. This Trump’s performance in Hidalgo County was remarkable. In 2016, Hilary Clinton thumped him by 41 points [Hispanic Voters Deliver a Texas Win for Trump, by  Keith Collins, Ford Fessenden, Lazaro Gamio, Rich Harris, John Keefe, Denise Lu, Eleanor Lutz, Amy Schoenfeld Walker, Derek Watkins and Karen Yourish, The New York Times, November 10, 2020]. But that gap narrowed sharply in 2020, when Joe Biden only won by 17 points.

The most impressive performance Trump pulled off in the area: Zapata County. Democrats took this county handedly in 2016 (66 percent to 33 percent), but Trump pulled off a major upset in 2020 and actually won it by a respectable 52 percent to 47 percent vote count—marking the first time in a century that a GOP presidential candidate took the county [First Reading: Why it was Viva Trump! in Zapata County by Jonathan Tilove, Austin-American Statesman, November 5, 2020].

Successes along the border have continued in the case of Javier Villalobos’ victory In the mayoral race in McAllen, Texas on June 5 [More Latinos Bid ‘Adios’ to Democrats, by William McGurn, Wall Street Journal, June 7, 2021]. This was indeed a remarkable accomplishment. It was the first time in decades that a registered Republican won the mayoral seat [Republicans think they can take South Texas—especially after a win in McAllen, by James Barragan, The Texas Tribune, June 11, 2021]. McAllen is 85 percent Hispanic and has traditionally been a safe Democratic city.

But I would caution against making hasty conclusions that Hispanics are on the cusp of exiting the Democratic coalition. More importantly, the GOP perspective that Hispanics are breaking away from Democrats because they’re rejecting the party’s pro-socialist message remains unconvincing.

This assumption may hold true for South Florida Hispanics (many Cuban and Venezuelan refugees from Communism). But for other Hispanics in the US, anti-socialist beliefs aren’t deeply-rooted [Latino voters favor raising minimum wage, government involvement in health care, stricter gun laws, by Jen Manuel Krogstad, Mark Hugo Lopez, & Abby Budiman, Pew Research Center, February 20, 2020]. In fact, some are quite receptive to candidates who promote generous handouts, as seen in the case of Bernie Sanders who has performed well with Hispanics in several states largely due to his class-reductionist policies [Latino voters might have saved Bernie Sanders’s campaign, by Nicole Narea, Vox, March 4, 2020].

Counterintuitively, some Hispanics do become receptive to Republican policies when Republicans go National Conservative on issues related to crime and immigration. Here’s the thing about the latter point: Large swathes of the Hispanic electorate simply don’t care much for immigration.

For example, a poll from Pew Research even found that Hispanics rated strengthening the economy, handling COVID, improving the employment situation, among other issues that were more important than immigration. All told, Hispanics ranked immigration as one of their lowest policy priorities [Economy and COVID-19 Top the Public’s Policy Agenda for 2021, Pew Research Center, January 28. 2021].

On a similar note, a poll the Washington Post ran in tandem with the University of Maryland poll found that 69 percent of Hispanics supported halting immigration during the first wave of COVID-19 lockdowns in 2020.

In fairness, I can’t fault people for being perplexed at how some Hispanics are hostile towards immigration. It is forgotten that labor activist Cesar Chavez, a known immigration restrictionist, is still held in high esteem among Hispanics voters, especially those who have lived in the US well before the passage of the Hart-Cellar Act.

The South Texan branch of the Hispanic population (Tejanos) are a peculiar bunch who have backgrounds and interests that diverge from recent waves of Hispanic migrants. These Hispanics likely have ancestors who settled South Texas when the area was under Spanish control. Plus, a significant minority of Tejanos joined the Anglo patriots in their fight to free themselves of the despotic regime of General Antonio López de Santa Anna and establish the Republic of Texas thereafter [Tejanos played key role in Texas Revolution, by Joe Holley, Houston Chronicle, April 18, 2014].

As for crime, Tejanos are spooked by the situation South Of The Border, where the government has effectively collapsed in its struggle against drug cartels. Thus criminal organizations like the Gulf Cartel already have a substantial presence in Texas’ Rio Grande Valley [The Coyote Cartel, by Seth Harp, Rolling Stone, June 14, 2021]. Unlike the Treason Lobbyists, many Tejanos witness firsthand the perils of Open Borders that come in the form of human trafficking, drug trafficking, and the carving out of gang territory on American soil.

As cartels become more powerful in Mexico, they will inevitably make their way up north. A porous border is an open invitation for cartels to come in and have a total field day. With defunding of the police now a Leftist cause, it’s only a matter of time before police departments across the country get kneecapped. A Woke America that abandons concepts like border security and law enforcement is a Mexican cartel’s dream come true.

I am sure that many Mexican cartel members have Aztlan fantasies that they’ve been dying to realize. And they would relish the thought of taking back lands that those dastardly Anglos “stole” from them. Tejanos, based on their proximity to the US border, will be among the first victims of cartels bursting through the border. Soon thereafter, whites will follow suit as the cartel’s prey. That’s how high the stakes are.

Here's the thing. Conservatism Inc is still stuck on stupid. They insist that it’s because “muh socialism!” that certain Hispanics are going over to the Republican fold. This is just another pretext for these hacks to continue putting out cringeworthy anti-socialist content. Talk about misinterpreting trends!

In all honesty, I don’t expect Republican leaders to ever get the National Question. Hence, my belief that they must face populist pressure from below and ultimately be replaced by upstart populists at all levels—the candidates, the party bosses, the donors.

From that point, we can run serious campaigns that target working class whites and non-white groups like Tejanos who have some grasp of the crisis unfolding before our eyes.

But first things first: we must purge the GOP of its brain-dead leadership before we can implement any change that upholds the interests of the Historic American Nation.

Pedro de Alvarado [Email him] is a Hispanic dissident who is well aware of the realities of race from his experience living throughout Latin America and in the states.