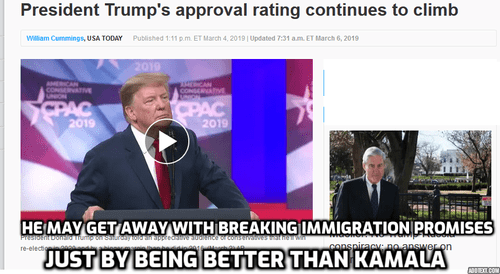 Trump’s 2020 Bet: Give Wall To Immigration Patriots, Cheap Labor To Donors; Run Against Democrat Nuttiness. Unfortunately, It Might Work.

The collapse of the Russiagate hoax is a devastating blow to the Democrat/ Main Stream Media complex, which quite obviously was stupid enough to believe its own propaganda, and unquestionably removes an obstacle to President Donald J. Trump’s re-election. Unfortunately for immigration patriots, Trump seems to have been persuaded that he can also achieve re-election with a new immigration agenda: make efforts to build the wall while simultaneously championing an increase in legal immigration to provide cheap labor for corporations—the reverse of his promise in the 2016 campaign. Of course, in the long term this will be a disaster for America. But, short term, Trump may get away with it.

Last week brought a new round of disappointments for immigration patriots from the White House. There was the announcement the president requested an 8 percent cut to e-Verify funding in his proposed budget. The administration claimed that this didn’t matter because “technological modernization” meant there didn’t need to be as much funding for it as before. The White House also emphasized it still supported mandatory e-Verify, an idea that congressional Republicans and Trump have seemingly forgotten. [Trump seeks cuts to E-Verify, by Rebecca Rainey, Politico, March 19, 2019]

Color us skeptical that the e-Verify cut as just a cost-saving measure.

Next was the administration’s decision to bring back catch-and-release policies for illegal families caught in the Rio Grande Valley. No longer will illegals who travel with minors be detained upon arrest; they now will be merely processed by Border Patrol and sent on their merry way. The new policy will benefit hundreds of illegals who can now get into America and skip out on their court date. [Trump administration to stop detaining some migrant families at border, by Michael Burke, The Hill, March 19, 2019]

This is a reversal of an executive order Trump signed last year that was supposed to end catch-and-release policies and detain all illegals apprehended at the border. Administration officials claim the new policy is response to a lack of space for detainees at detention facilities and “safety concerns.” Homeland Security chief Kirstjen Nielsen insists this isn’t “catch-and-release,” it’s just a sign “we are out of detention space”. [DHS secretary denies reintroduction of "catch and release" at border, CBS News, March 22, 2019]

But it clearly is catch-and-release, regardless of what the Trump administration says. So it appears the detention facility bed cap in the budget deal Trump signed last month may have hindered his ability to enforce immigration law after all. Trump shills blame Congress.  They seem to think the administration just can’t be expected enforce immigration law on its own. [Trump Administration Is Reverting to ‘Catch and Release.’ Congress Is to Blame., by James Carafano, The Daily Signal, March 21, 2019]

And blaming Congress doesn’t excuse the fact that there’s a complete lack of any legislative proposals from the White House or its congressional allies to fix the problem. The same goes for mandatory e-Verify.

You cannot blame Congress for these misfortunes when the Trump administration makes no effort to correct these problems— or to advance any other patriotic immigration reforms.

Even worse, on top of all this, Trump continues to argue America needs more immigrants to meet corporate demands while the situation at the border deteriorates.

The southern border is in chaos. February witnessed the highest number of border crossings in 12 years. This surge has overwhelmed Border Patrol and they’ve had to call on Immigration and Customs Enforcement agents to aid with the situation. This shift in manpower has resulted in a sharp drop in immigration arrests [U.S. immigration arrests fall under Trump as resources shift to the border, by Mica Rosenberg, Reuters, March 21, 2019]

Nielsen has called the situation a “near system-wide meltdown” and urged Congress to do something about it. [Secretary Nielsen Remarks on the State of Homeland Security, March 18, 2019] It should be noted that Nielsen has not been competent at her job and has been singled out by Trump for her failures on border security. Yet the president keeps her on as DHS chief instead of finding a worthier replacement. He appears content to blame Congress and Democrats for America’s immigration woes while doing nothing to fix the crisis.

Trump has done some good things. His executive order has gained billions for the wall and he vetoed the bill that aimed to block the national emergency declaration. His administration continues to fight to uphold good immigration policy in court. It netted a victory from the Supreme Court last week over the government’s power to detain and deport criminal aliens—the high court ruled non-citizen legal residents who commit a crime and serve time can be detained by DHS agents without a bond hearing, which makes it easier to deport them. [Supreme Court Backs Trump Administration in Deportation Case, by Greg Stohr, Bloomberg, March 19, 2019]

But these actions are not enough to curb illegal immigration, let alone reform and restrict the legal immigration system. It seems that Trump just wants to slouch toward 2020 claiming that the wall is being built—and that’s it when it comes to immigration. No more talk about the elimination of chain migration, the diversity visa lottery, or ending temporary protected status for migrants from Haiti and Latin America. Immigration reduction is off the table in favor of a corporate-endorsed immigration increase. Any problems in enforcing immigration law will be blamed on Congress.

Meanwhile, the Democrats are spiraling toward an extremism that will alienate many Americans. They still want impeachment proceedings even after the Mueller report showed no impeachable offenses. Many Democrats have embraced the socialist label. Support for third trimester abortions is now almost party dogma. They all want to raise taxes. They all want to check “white privilege.” And they all want to rattle the saber against Russia.

Trump’s many failures pale in comparison to the horror that is the Democratic Party’s platform. The GOP and Trump exploited the calls to abolish ICE in 2018, which helped them avoid a total wipeout. The same will likely occur again when Trump’s 2020 opponent has an agenda that goes much further than abolishing ICE.

The president’s new immigration stance is a major disappointment to immigration patriots. Trump’s 2016 campaign promised to transform the GOP into a nationalist and populist party that would commit itself to reducing nation-breaking immigration and putting Americans first. Trump’s presidency, however, has shown little difference from the agendas of the Republicans he defeated in the primaries. Tax cuts, GDP growth, fears of socialism, and unwavering support for Israel are Conservative Inc. hallmarks--and now seem likely form the backbone of Trump’s re-election pitch.

However, the call for more immigration, which Trump frames as a needed policy for businesses, makes him more appealing to the Republican donors who shrank from him in 2016. Vice President Mike Pence has made it his mission to convince these Trump-wary donors to support Trump in 2020 and reportedly has made significant progress towards his objective. [Pence woos 2016 anti-Trumpers to bankroll billion-dollar reelection, by Alex Isenstadt, Politico, March 21, 2019]

Of course, it’s true that Trump could be a lot worse on immigration. He could propose a grand Amnesty for all illegal immigrants. This may indeed be part of the grand the immigration proposal Jared Kushner is reportedly negotiating, but it appears antithetical to Trump’s instincts. Trump is still fighting for the wall and the power to aggressively enforce immigration law.

And it’s still not impossible that Trump may revert back to his 2016 self. He’s wobbled many times on immigration patriotism, but he’s always come back to it. Jared Kushner is the main driver of the president’s terrible policies and Trump could lose faith in his primary adviser—perhaps if the grassroots backlash to Kushner’s immigration proposal is as fierce as it was to repeated Bush-Obama Era Amnesty proposals. Losing faith with advisers is a very common occurrence with Trump, as seen in his many personnel departures. It hasn’t happened with his blood relatives yet, but the history of Europe’s royal families suggests that it can.

New advisers could come in and convince the president that real steps to patriotic immigration reform will better help him win again. A renewed awareness of America’s terror threat may prompt him to call for cuts. Trump could also listen to his economic advisory council, whose recent report said there are too many Americans out of work to necessitate more immigrants. [White House Economic Staffers Suggest No Need for More Immigrant Workers, by Neil Munro, Breitbart, March 19, 2019] This is particularly true if the long economic boom shows signs of coming to an end.

A lot can happen over the next year that could make Trump a national populist again.

But we can’t overlook the fact Trump could re-elected president as Business First Don. And, given his personality, it’s all too probable that he will be happy to settle for that.