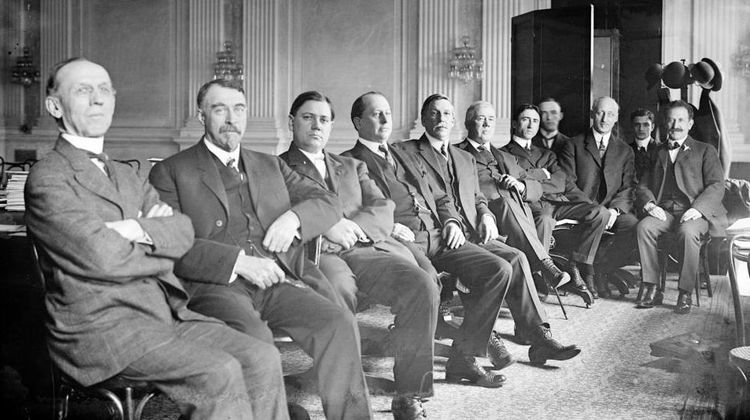 Time For Another Pujo Committee?

Peter Brimelow writes: I try not to mix my political and financial journalism, partly because the former invariably causes tolerant and diversity-loving liberals to try to get me fired from the latter, which gets to be a bore. But this column, which was posted on Sunday night under the headline Another Case Of Collusion? It's Time To Take A Hard Look Washington As Well As Wall Street on Dow Jones Market Watch, is relevant to VDARE.COM readers because the minority mortgage meltdown, which might precipitate a “Diversity Recession“, may be just a special case of government manipulation of markets, through eager (and well-rewarded) “chosen instruments”. I sense this will turn out to be one of the greatest scandals in American history. But I'd rather write about immigration, which in the long run is more important.)

NEW YORK (MarketWatch)—How did I become rich and famous while toiling as a wage slave in the impecunious trade of financial journalism? When my grandchildren ask this question, I will be able to reply: by writing two articles that prevented the financial meltdown, and likely recession, of 2008.

I really did co-write the first one, for Forbes magazine on day Jan. 4, 1993. [The Hidden Clue] The Federal Reserve Bank of Boston had just published a study purporting to prove definitively that mortgage lenders were discriminating against minorities, the hot cause of the day. [Mortgage lending in Boston: Interpreting HMDA data (Working Paper 92-7)]

But when my brilliant co-author, Leslie Spencer, asked the Boston Fed's research director, Alicia H. Munnell, what minority default rates were, she said proudly that census tract data showed that they were equal to whites. When Leslie pointed out that this actually proved there was no discrimination, because the lenders had somehow weeded out the credit risks down to the same acceptable level, Munnell was dumbfounded and had to concede (on tape) that she did not, in fact, have definitive proof of discrimination at all.

We had discovered a fundamental technical flaw. We sat back and waited for our Pulitzer Prizes.

Nothing happened. The Boston Fed study continued to be cited by press and politicians. Alicia Munnell was apotheosized into the Clinton administration.

Partly this was because Forbes magazine, albeit then very successful, just didn't figure in the media food chain. Its readership seemed to be confined to 750,000 retired dentists. That mattered, in the dark days before the Internet.

But mostly nobody wanted to know. Subsequently, University of Texas economists Stan J. Liebowitz and Ted Day demonstrated that the study's own data was riddled with errors. [PDF] Nobody paid any attention to them, either.[ A Study That Deserves No Credit, By Stan Liebowitz, Wall Street Journal, September 1, 1993]

That's a bipartisan "nobody," by the way. Questioned later about the Boston Fed study, a Bush Fed governor just smirked and said he was sure the banks would make money. If anything, pressure on the financial industry to make marginal loans increased under George II, part of his Latino outreach strategy.

Of course, the financial industry was all too happy to be pressured. It no doubt figured it could make commissions and, if there was trouble, the government would bail it out.

This brings me to my second rich-and-famous making article, on the 1998 Fed-orchestrated bailout of Long-Term Capital Management hedge fund.

Which, I have to admit, I didn't actually write. I could never interest any editor in it. But they were wrong and I was right. (Notice a pattern?) LTCM was the current bailout in microcosm.

I was fascinated by the LTCM bailout. I couldn't figure out why the Fed needed to rescue a relatively small firm. But two excellent books When Genius Failed and Inventing Money, respectively by Roger Lowenstein and Nicholas Dunbar (who really do deserve to be rich and famous) provided a lot of damning detail, albeit without drawing conclusions.

Bottom line: LTCM seems to have been bailed out because it was well-connected. Its connections were significantly to Goldman Sachs, which in turn was extremely well-connected to federal government. Its former CEO, Robert Rubin, was Treasury Secretary at the time.

By an amazing coincidence, another former Goldman CEO, Henry Paulson, is orchestrating the current bailout.

Dunbar wrote of LTCM that by the end of 1997: "Governments treated it as a valued partner, to be used whenever markets weren't efficient enough to achieve macroeconomic goals."[Inventing Money, P. 179]

My questions: What governments? What goals? Are subprime mortgages just a later example?

How long has this sort of collusion been going on?

After the Panic of 1907, the U.S. Congress set up the Pujo Committee to investigate the so-called "money trust."

Of course, that resulted in the Federal Reserve, which arguably is now part of the problem.

But maybe we should try again.

And this time look at Washington as well as Wall Street.

Peter Brimelow (email him) is editor of VDARE.COM and author of the much-denounced Alien Nation: Common Sense About America's Immigration Disaster, (Random House – 1995) and The Worm in the Apple (HarperCollins – 2003)