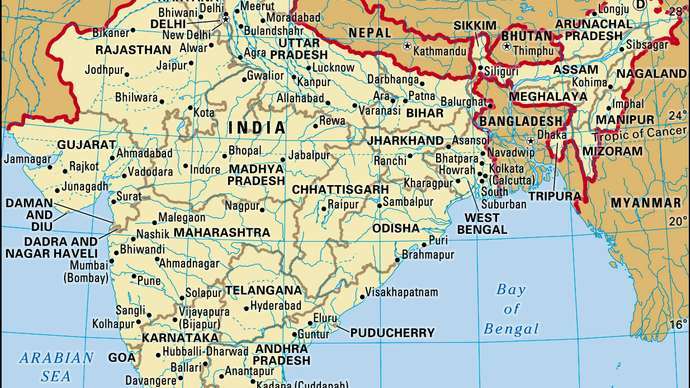 Thoughts on the Indian Diaspora from a VDARE.COM Reader

With Mexico being the undisputed Numero Uno in immigration to the United States, both legal and illegal, the battle rages on for claiming second place honors for the coveted Numero Dos award.

And the current leader is—India.

The Department of Homeland Security (DHS) and its Office of Immigration Statistics (OIS) keep tabs on immigration statistics with their annual yearbooks released at the end of each fiscal year. The latest offering from September, 2004, shows India winning the battle for second place in naturalized American citizens. [Yearbook of immigration statistics for 2003  — PDF, page 134].

A VDARE.COM reader has described the growing Indian diaspora in the U.S. and its connection to what might be some sort of coordinated effort of gaining economic leverage or advantage.

Maybe so. But could it be that Indian immigrants, like most others, are just coming to the U.S. because they can? There's precious little (if anything) stopping them.

An Indian VDARE.COM reader recently commented on Indian immigration via e-mail (comments in parentheses, etc., are from the original):

Subject: Immigration of Indians into USA an Indian Agenda (Nexus)

"I want to share with you my point of view (observation). Washington (Capitol Hill) has been flooded with Indians during the period of Clinton Administration (Democrats), suggesting that migration of Indians into USA might bring more harmony in American community (except they had their own agenda, the agenda of the Indian government to increase economic immigrants into USA). This played into the hands of Indians. Every street has a engineering school since it is all free for all to get jobs in USA. Every politician in India is given permission to open one since 1985.

"Indians basically are mixed race (many in modern India), and we have a very undisciplined democracy here. And they are very ethnic oriented and create a new problem in America. Even though they are mixed race they don't mix with Black Americans (which actually, the Democrats and other Indian caucus wants the Americans to think).

"What is happening is, American schools and jobs are rapidly filled up by Indians with many INDIAN-owned companies in America are ready to sponsor VISA for Indians (IGATE.com, InfoExpertsUSA.com, etc., etc). They work in nexus with Indian government's clandestine policy.

"The British were the Lighthouse for the Indians to confront America, and their TV is broadcasting and taking Anti-American agenda to Indian Homes. The population in India is over-pouring, with buses crowded like pigs traveling to slaughter house.

"Indians and Pakistanis are playing a game along with the British in the name of Kashmir. Under these tangles, they mass-migrate their population to USA and Europe.

"Why would anybody living in Democracy like India want to Migrate? Yet Indians are the largest migrants to USA only next to Mexicans.

"These are economic migrants, and their agenda is to bring dollars to India because they can't bring it any other way. The GAS stations in USA are mostly owned by Indians, 10% of all doctors are of Indian origin, and now Software is flooding Indians into every nook and corner. Many Motels and Hotels are owned by Indian Gujaratis. If this is not checked, somehow Indians will gain political voice in USA (many are trying).

"From here I can see the people are feeling successful of their government's agenda of migrating technocrats to USA especially. First they opened standard institutions like [Indian Institute of Technology] IIT, now education has become substandard here with every street selling a degree in engineering. Yet they are allowed to get jobs in USA, because America is not paying close attention to what is going on in reality.

"I don't have to explicitly say more on this, the statistics will speak for themselves.

"But India and Indians are not a progressive society, they are survivalistic in attitude and actions and thought, this is the glitch.

"They are not taking hard jobs or having any hardships as previous migrants in last century had. They land in planes and grab better jobs, they bring their religion along with them (Hindu or Muslim mostly).

"Many things negative can be seen in a perspective, not that I have personal prejudice against it, but I see lot of bad things.

"Thanks for reading my point of view."

So move over, Mexico.

If over-the-border illegal immigration is ever somehow curtailed, the second tier countries in American immigration numbers might well catch up.

Rest assured, there are countless more Indians ready and waiting for jobs in America.

Juan Mann [send him email] is a lawyer and the proprietor of DeportAliens.com.