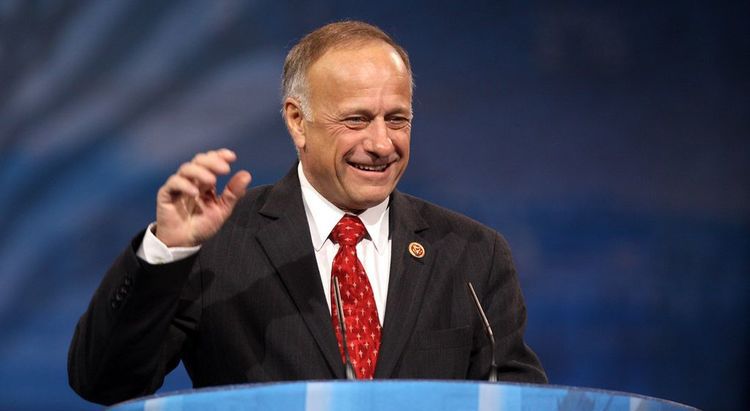 Thinking About The King Kerfuffle: The Answer To False Charges Of "Racism" Is The (Truthful) Charge Of Treason

Of course Rep. Steve King was accused of “racism” when he noted recently that the much-mythologized young illegal aliens who become high school valedictorians are far outnumbered by those who enter as drug mules—for example, by professional token Hispanic columnist Ruben Navarrette here. The charge, needless to say, caused Establishment Republicans to flee in panic.

Why “of course”? Because the modern definition of “racism” is “someone who is winning an argument with a liberal”—or, too often nowadays, with a libertarian or with a cheap-labor Republican.

(And King did indeed win the argument. The simple fact is that drug mules among young illegal aliens do indeed outnumber valedictorians by a factor of quite possibly a hundred or more—especially because most of the “valedictorians” recently touted in the Main Stream Media turn out to be frauds).

Thus currently fear of being accused of “racism” is a huge problem for opponents of the S.744, the 2013 Rubio-Schumer Amnesty/ Immigration Surge act, which has been steamrollered through the Senate and which the House is now being pressured to pass. (This is what provoked King’s comment). Many live in terror that someone in their coalition of supporters might be revealed to be “racist.” (Or accused of it by the MSM, which amounts to the same thing).

At the same time, they utterly lack the language to point out the pro- Amnesty/ Immigration Surge coalition includes Communists, Socialists, Cultural Marxists, sexual perverts, predatory plutocrats and crony capitalists, Reconquistas and other ethnic agenda mongers, to say nothing of Democratic political hacks flagrantly plotting to elect a new people so as to keep their own snouts sunk in the trough.

That word is “Treason.”

What the Left, the Democrats, and the immigration enthusiasts are doing to America is treason.

Treason, of course, is defined quite specifically in the U.S. Constitution (Article III, Section 3): “Treason against the United States shall consist only in levying war against them, or in adhering to their enemies, giving them aid and comfort.” The Founders were specific because they were aware of the danger of what Colonel Oliver North was later memorably to describe, during the Iran Contra hearings, as "criminalizing policy differences."

But the Founders did not mean that only armed attack constituted treason. The Supreme Court, in Cramer (1945), quoted a definition of treason as "an act which weakens or tends to weaken the power of the [United States] . . ." Treason required an act and conscious intent; but not necessarily war.

And this definition of treason must be read in the context of what the Founders believed they were doing. The preamble to the Constitution begins: "We, the People of the United States, in order to form a more perfect union, establish justice, insure domestic tranquility, provide for the common defense, and secure the blessings of liberty to ourselves and our posterity . . ." [Italics mine.]

Not posterity in general, note—but the specific posterity of those men who signed that document. They represented a full-fledged nation, an organic ethnocultural community. Newcomers might be assimilated (although the Founders were actually fairly skeptical about further immigration, and there was in fact very little for several decades after the Revolution). But there was no thought that immigrants should transform.

Yet Leftists have no hesitations about boasting openly that they plan to displace this American Founding nation through a public policy—immigration.

For example, Debbie Wasserman Schultz, the appalling Democratic National Committee Chairthing, has boasted that her party will be swept to power by the immigration-driven “browning of America.” She puts this in explicitly racial-triumphalist terms:

“Just look at the chamber at the State of the Union. Look at the side of the chamber that the Democrats sit on and the side of the chamber that Republicans sit on. And you can notice a dramatic difference in who chooses to affiliate as Democrats and who chooses to affiliate as Republicans. The diversity in the Democratic Party is remarkable…[Democrats are] the natural home, politically on major issues to Hispanics, to women, to Jews, to Asian-Americans, the diverse spectrum—to African Americans."

Imagine what would have happened if any Republican had said “The GOP is the natural home of whites—just look at the Democrats!”

Remember, when Teddy Kennedy’s 1965 Immigration Act opened the floodgates after, whites were 90% of the population—they were Americans.

“This amendment is racist. I think it’s directed basically to people who speak Spanish.”

That was Senator Harry Reid (D-NV) on the proposal to make English the official language of the U.S. that was added to the last Amnesty/ Immigration Surge a.k.a. “Comprehensive Immigration Reform” bill but two, back in 2006. [Reid calls language proposal racist, The Washington Times, May 18, 2006] (It died when the House refused to take up the Senate bill.)

Unlike Steve King’s comment, Reid’s outburst was profoundly stupid and irrational. But it is worth thinking about too.

Needless to say, Official English—the idea that federal, state, and local governments should operate in English to prevent creeping Canadian-style linguistic balkanization—is not “racist” by any standard. Anyone of any race can speak English. And they do: the second-largest English-speaking country in the world is India. There are an estimated 79,000,000 English-speakers in Nigeria.

Moreover, African-Americans are probably disproportionately disadvantaged by creeping linguistic balkanization, because they are excluded from manual and service jobs when employers insist on Spanish-language proficiency. (Of course, this is a problem for the entire American working class).

Reid’s reaction was typical of the way liberals think, or more accurately emote—but they emote this way because it works.

No Official English amendment was offered to the 2013 Rubio-Schumer Amnesty/ Immigration Surge bill. No doubt this was partly because that Reid, now Democratic Majority Leader, rammed it through the Senate in such a mad Obamacare-type rush that debate was cut off. But it’s also because, after the 2012 Romney fiasco, Conservatism Inc. is afraid. (Ironically, the left-leaning Gallup Poll has just found that an overwhelming majority of American want immigrants to learn English. [Most in U.S. Say It's Essential That Immigrants Learn English, by Jeffrey M. Jones, August 9, 2013])

This is an open admission that the English-language requirements for U.S. citizenship have been abandoned—and an encouragement to Spanish-speaking immigrants not to assimilate.

Democrat policy is to swamp the historic American nation by abetting, not just an invasion by foreigners, but colonization—the development of enclaves that are to all intents and purposes no longer American territory.

How much more treasonous can you get?