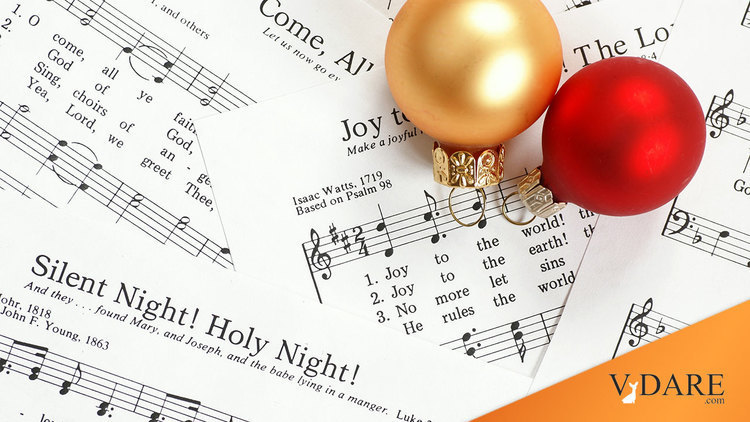 The War Against Christmas 2010: God Bless Us, Every One!

I started here at VDARE.com by winning our Christmas competition in 2000. I've written about how that changed my life, but I want to go back and look at a couple of stories from my winning entry ten years ago.

The first is this one:

"[My question is, "Why is an African Methodist Episcopal Church inviting Farrakhan to speak at all?']

This was an error by me—it wasn't Farrakhan himself, but one of his national assistants, Khalid Abdul Muhammad. (Not an Arab, born Harold Moore, Jr.) Muhammad was actually fired by Farrakhan, though not for his anti-Christmas remarks—the link above comes from the Anti-Defamation League

But the point remains the same—why is a Christian minister of religion inviting a man like that to speak at his church? The answer is that they may disagree on Christmas, but they agree on hating whites. (Here is Khalid Abdul Muhammad on video preaching mass murder against white South Africans.)

And it's relevant, ten years later, because the President of the United States is a former member of Jeremiah Wright's congregation, and Wright, like that anonymous AME minister, agrees with Farrakhan about how bad whites are, giving Farrakhan his self-invented "Rev. Dr. Jeremiah A. Wright, Jr. Trumpeter Award" for "Lifetime Achievement." See

In mentioning Jeremiah Wright, by the way, I should mention that Steve Sailer here at VDARE.com was reporting on him not only before the MSM had reported on him, but before they found out themselves—and conspired to suppress all mention of him before the primaries. [Winter Kills: Obama Exposed As Race Racketeer, March 25, 2007]

But it's all connected—that anti-Christmas rant by Khalid Abdul Muhammad was a cloud on the horizon as far as Muslims and Christmas were concerned, but it's now very relevant.

The other story I'll mention is from a First Things review of Tinsley Yarbrough's book, The Rehnquist Court and the Constitution

. The reviewer described Yarbrough [email him] as inviting his "readers to join him in applauding or hissing on cue", and portraying conservative members of the Court as "the sort of people who you just know would be opposed to human rights" [Legal Theories Nobody Believes, by Steven D. Smith, First Things, November 2000]

"On the bench, Rehnquist could be 'pompous.' And he is insensitive; for example, despite an objection lodged by sixteen law clerks he persisted in a court tradition of holding an annual Christmas party that included offensive features such as 'a large Christmas tree, a tape recorder playing Christmas music, . . . and the singing of carols.'" (My emphasis)

Smith is not to blame for this, by the way, he's just pointing out how stupid Yarbrough is. I learn, ten years later, courtesy of Google Books, that the story, on page 47 has more to it

"Some of the more liberal clerks also objected to aspects of Court routine. That same term, for example, sixteen clerks objected to aspects of the Christmas party held annually in the Great Hall. In a November 21 letter to the chief justice, all of Brennan's, Stevens', and Marshall's clerks; three from Blackmun's chambers; and two O'Connor clerks expressed their concern 'regarding the Court's celebration of Christmas.' Noting that in the past, such events had included a large Christmas tree, a tape recorder playing Christmas music, wreaths around the busts of former chief justices, and the singing of carols, the clerks conceded that '[s]ome of us do not object to all these observances,' but added that all were 'concerned that members of the public as well as Court employees may be offended by them. We request an opportunity for a small group of us to discuss this matter with you at your convenience.'"

This was in 1990—when the war on Christmas was just revving up. It's a distressing thought that those young people, who were juvenile, PC Supreme Court Clerks 21 years ago, are now probably law professors and officials in Obama's Department of Justice.

One member of the court refused to attend the Christmas party on straight War On Christmas grounds, not because of his own religion, (in the year 1990  all the Justices of the Supreme Court were nominally Christians) but because of the "Separation of Church And State." It was the Court's most reliably, even dangerously liberal member—and also its only African-American:

"' Justice [Thurgood]Marshall was more to the point. 'As usual, I will not participate,' he had written the chief justice a week earlier. 'I still prefer to keep church and state apart.'"

It's all connected! VDARE.com hopes you will have as Merry a Christmas as the Supreme Court lets you have.

"God save the United States and this Honorable Court", and God Bless us every one.

2010 The War Against Christmas 2010: Denial—And A Developing "Diversity" Rationale

2006 War Against Christmas 2006 Competition [IV]: War On Christmas Is War On Indians, Too By David Yeagley

2005 War Against Christmas 2004 Competition [XIX]: More On The Korporate Khristmaskampf

2003 Take Back Christmas! By Tom Piatak

1999 How the HUD Stole Christmas By Peter Brimelow