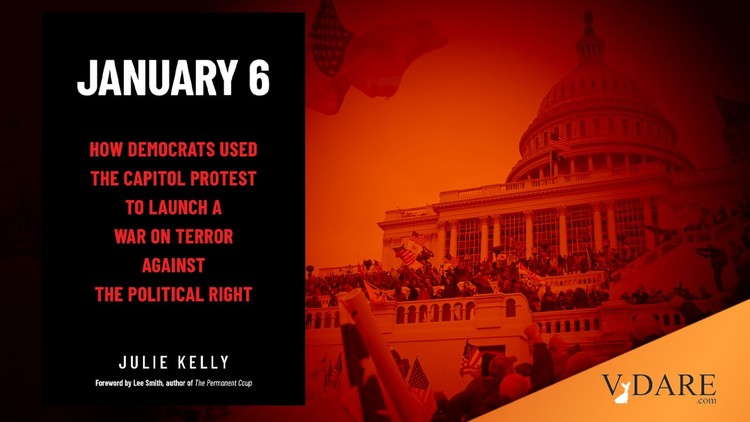 The Biden Regime desperately needs a distraction, and it seems that stage-managed hearings on the January 6, 2021 protest is the best it can come up with [Former ABC president helping Jan. 6 committee with production of primetime hearing, by Nikolas Lanum, Fox News, June 6, 2022]. We are literally being commanded to watch [“People Must Pay Attention. People Must Watch”: The Jan. 6 Committee Is Trying To Make The Most Of Its Prime-Time TV Slot, by Terry Moseley and Charlotte Klein, Vanity Fair, June 6, 2022]. Regimes in trouble usually look for a foreign scapegoat but the Biden Regime is instead picking on a domestic enemy—namely, Trump supporters and ordinary Americans. Thus we should pay attention to January 6—not because it was an “insurrection,” but because it provided the excuse to take away what few liberties we have left. July Kelly’s book January 6: How Democrats Used the Capitol Protest to Launch a War on Terror Against the Political Right is the essential starting point.

Significantly, Kelly begins by noting that the Regime did a “victory lap” to boast of its control of the 2020 election with a piece in Time about how it “saved democracy” from President Trump [The Secret History of the Shadow Campaign That Saved the 2020 Election, by Molly Ball, February 4, 2021]. One can only imagine the way the D.C. press would react if the Russian government were putting out propaganda like Ball’s:

There was a conspiracy unfolding behind the scenes, one that both curtailed the protests and coordinated the resistance from CEOs. Both surprises were the result of an informal alliance between left-wing activists and business titans. The pact was formalized in a terse, little-noticed joint statement of the U.S. Chamber of Commerce and AFL-CIO published on Election Day. Both sides would come to see it as a sort of implicit bargain—inspired by the summer’s massive, sometimes destructive racial-justice protests—in which the forces of labor came together with the forces of capital to keep the peace and oppose Trump’s assault on democracy.

As Kelly notes, for Trump supporters, this was confirmation of everything they had feared. Big Tech really did manipulate information, CEOs and communists really are on the same side against nationalists, and the “sometimes destructive” protests (which unleashed bloodshed that is still ongoing) really were unleashed from the top down and tolerated by political authorities.

All this is far more important and fundamental than specific charges about voting machines or ballot dumps. If voters can only see certain information, and if the law is selectively enforced, the premises of self-government itself have been eliminated and no election can be “free and fair.”

Power in the American system doesn’t lie with the elected President, but with what its boosters themselves call a “conspiracy” of powerful organizations utterly determined to crush Trump supporters, i.e., the Historic American Nation.

On January 6, in their naïveté, Trump supporters thought the hands-off approach police took towards protesters from Inauguration Day 2017 all the way through the 2020 BLM riots would also apply to them. They were WRONG. Attorney General Merrick Garland said he would go after “all January 6th perpetrators, at any level” [What to Know About the Hundreds Charged With Crimes in Capitol Attack, by Alanna Durkin Richer, NBC, June 7, 2022]. One of the largest manhunts in history—what VDARE.com has called “The Garland Raids,” in every way comparable to the 1920s Palmer Raids but far less justified—was unleashed against Americans, some of whom merely walked through open doors: “Open source video taken by Trump supporters and journalists on the scene showed several instances when United States Capitol Police employees opened doors or, at the very least, did not resist entry into the Capitol,” writes Kelly.

Significantly, the Capitol Police and the Justice Department fought against the release of 14,000 hours of footage so Americans could actually see for themselves what happened that day. As Kelly recounts, some of those arrested are still being held in solitary confinement and threatened with beatings—as she comments, “especially painful for the detainees after watching thousands of violent protesters and rioters escape unpunished for committing crimes during the summer of 2020.”  She reports that the detainees’ habit of singing “God Bless America” at night has reportedly enraged the guards, one of whom screamed at them, “F**k America!”

This exchange captures the essential absurdity of the situation. The detainees, even if their actions were wrong, love their country and thought they were protecting it. Their persecutors clearly despise the country and don’t particularly mind violent actions against the government if it is for goals they agree with. Yet they have the power of the state.

For example, the Biden Administration has now blessed a token punishment for two left-wing lawyers, one a Pakistani immigrant and one black, who reportedly made a Molotov cocktail and threw it into a police car. In contrast, one Jan. 6 protestor who allegedly attacked police with a fire extinguisher, a pole, and a plank received five years in prison.

This is not to defend such actions. Crime should be punished. However, the law must be applied equally. If it’s not, it doesn’t deserve respect or legitimacy.

The judge in the case of the man who allegedly attacked Capitol Police is Tanya Chutkan. She’s an Obama nominee and a black immigrant from Jamaica  who received a 95-0 vote on her accession to the District Court. She’s spoken about the need for a “thick skin” to shrug off racist comments [Judge Tanya Chutkan ‘Developed a Thick Skin’ to Overcome Race-Based Comments, USCourts.gov, February 24, 2022].

For what it’s worth, she’s married to Associate Judge Peter Krauthammer, another Obama nominee and a former faculty member at the historically black college Howard University [Former Public Defender To Be Sworn In As Superior Court Associate Judge, District of Columbia Courts, April 13, 2021].

Judge Chutkan said the stiff sentence was necessary to stop “antidemocratic factions” and wondered whether non-whites who tried to enter the Capitol would have been met with rubber bullets. “I suspect not,” she said [US Capitol rioters gets 5 years in jail after throwing fire extinguisher at police, by Hannah Rabinowitz, CNN, December 17, 2021].

Of course, we don’t need to wonder. As VDARE.com Editor Peter Brimelow has pointed out, there’s ample precedent for Leftists invading government buildings and being celebrated. On contrast, he quipped, Ashli Babbitt, an unarmed woman shot dead by a black officer, would be a “saint, if not a Goddess,” if she were a Democrat. She certainly didn’t get rubber bullets.

Instead, the media turned the black officer into the hero, an amazing contrast to what’s happened to white cops who shoot suspects elsewhere in the country [Officer who shot Ashli Babbitt during Capitol riot breaks silence: ‘I saved countless lives,’ by Rich Schapiro, Anna Schecter, and Chelsea Damberg, NBC, August 26, 2021].

The Regime Media ran posthumous hit pieces against Babbitt, a veteran who died for a government that despised her far more than any foreign enemy.

In her book, published in December 2021, Kelly presciently predicted “show trials” in 2022 as the Biden Administration continues to preside over a disastrous economy.

They are saying the quiet part out loud. This isn't about "finding the truth" it is about distracting and hoping nobody notices that gas prices, supply shortages, inflation, volatile stock markets, brink of war on three fronts, crime spiking.... https://t.co/lwXdrUtIQV

“On the government side, the ongoing investigation into the Capitol breach will continue to wreak revenge on Trump supporters,” she wrote. “Meanwhile Nancy Pelosi’s January 6 select committee will create an ongoing political drama aimed at vilifying anyone in Trump’s orbit who can be tied to the purported ‘insurrection.”

That’s exactly what’s happened. Not only is the Regime Media creating a staged drama for January 6, but the charges are growing more serious as the Regime and its media desperately try to attract attention [TV News Shakes Up Schedules to Cover Jan 6. Committee Report on Capitol Attack, by Brain Steinberg, Variety, June 6, 2022]. Almost simultaneous with the acquittal of Clinton lawyer Michael Sussman, former Trump aide Peter Navarro was arrested for refusing to send documents to the January 6 committee [Tucker Carlson: Arrest of Bannon and Navarro Is A Huge Escalation In Democratic Party’s Capture of The Justice Department, by Tim Hains, RealClearPolitics, June 6, 2022]. Worse, members of the Proud Boys have been indicted for “seditious conspiracy,” so the government has its bad guy for this media spectacle [Proud Boys Charged with Sedition in Capitol Attack, by Alan Feuer and Adam Goldman, New York Times, June 6, 2022].

Yet the real question is…sedition against what? Even as this farce continues, a massive convoy of 15,000 migrants is marching on the United States, and we can expect they will be welcomed by the Regime [Huge caravan of up to 15,000 migrants heads through Mexico towards the U.S. border ahead of Biden’s Summit of the America’s in Los Angeles, by Morgan Phillips, Daily Mail, June 6, 2022]. The Department of Homeland Security, perhaps with giddiness, reports that there is more violence to come this summer and so more need for surveillance [US sees heightened extremist threat heading into midterms, by Ben Fox, Associated Press, June 7, 2022].

One threat the DHS identified, pro-choice radicals, reportedly has struck again, with a pro-life group reportedly firebombed [Abortion Activists Firebomb Pro-Life Pregnancy Center, Third Bombing in Weeks, by Steven Ertelt, LifeNews.com, June 7, 2022]. Yet it’s doubtful this will lead to a national effort to break up such groups.

Instead, Democrats are already planning gun confiscation, even to the point of dismissing constitutional rights entirely as “bulls**t” [To confiscate guns, Democrats are ready to destroy the courts and the Constitution, by Zachary Faria, Washington Examiner, June 3, 2022].

If the federal government welcomes foreign invaders, law enforcement is completely arbitrary, and the Constitution itself means nothing, what exactly is there to preserve?

The insane situation of political dissidents singing the patriotic hymns as the employees of government curse America may be unprecedented in history. America was once a nation-state, the political impression of a particular people. Now we see the state at war with the nation.

Our rulers demand that we support them out of patriotic duty. Yet true patriots recognize that the greatest enemies of the United States are those who govern from Washington D.C., claim to act in its name, and yet purposefully work to destroy it.

James Kirkpatrick [Email him | Tweet him @VDAREJamesK] is a Beltway veteran and a refugee from Conservatism Inc. His latest book is Conservatism Inc.: The Battle for the American Right. Read VDARE.com Editor Peter Brimelow's Preface here.