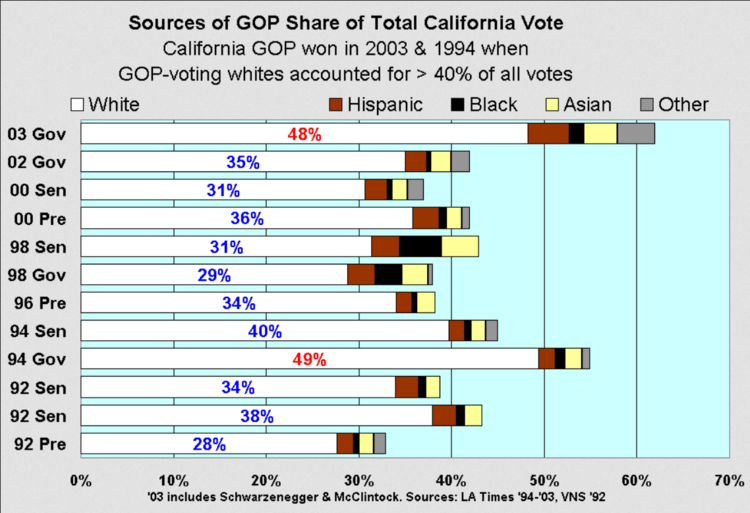 Did Arnold Schwarzenegger win the California governorship because he captured three out of every ten Latino votes, as much post-election chatter has implied?

Of course not. Republicans performed strongly in the California recall because they did what Republicans must always do to win: earn lots of votes from that enormous but apparently unmentionable bloc—whites.

From 1992 through 2003, Republicans lost ten of twelve major elections in California. Paradoxically, this 2-10 record in contests for governor, senator, and president is often attributed to the GOP's last successful effort before the recall: Pete Wilson's campaign against illegal immigration in 1994, which allegedly unleashed the sleeping Hispanic giant blah blah.  But, needless to say, this cliché can't explain why the GOP candidates in California got skunked 0-3 in 1992 - two years earlier.

The exit polls for these California elections reveal the real explanation. The ten GOP losers in these contests all failed to win a majority of the non-Hispanic white vote. [VDARE.COM note: Stanley Womack of Resisting Defamation complains that "non-Hispanic white" is a put-down, but we feel obliged to use it—at least occasionally— to indicate the specific category so termed by the Census Bureau.] The two GOP victories, however, did involve a majority of the white vote.

Wilson won 61% in 1994. The two Republican candidates in 2003 seized 67 percent. (I'm lumping Tom McClintock's 14 percent with Arnold Schwarzenegger's 53 percent because McClintock ran to the right of Schwarzenegger. Alternatively, in a one on one matchup with Cruz Bustamante, Arnold won 66 percent of the white vote vs. Bustamante's 34 percent.)

In the last seven elections, the gap between whites and Latinos voting Republican has been quite steady: 22-28 percentage points. This year, 67 percent of white voted for the two Republicans vs. 41 percent of Hispanics (by the most optimistic count). That's a perfectly normal 26 percentage-point gap.

Conclusion: no extra Latino leaning won it for the GOP this year. The White vote is what produces GOP victories—hence what VDARE.COM calls (despite my modest disclaimers) the "Sailer Strategy" for GOP success.

Since GOP campaign strategists seem to have trouble understanding this point, I've drawn them a picture: 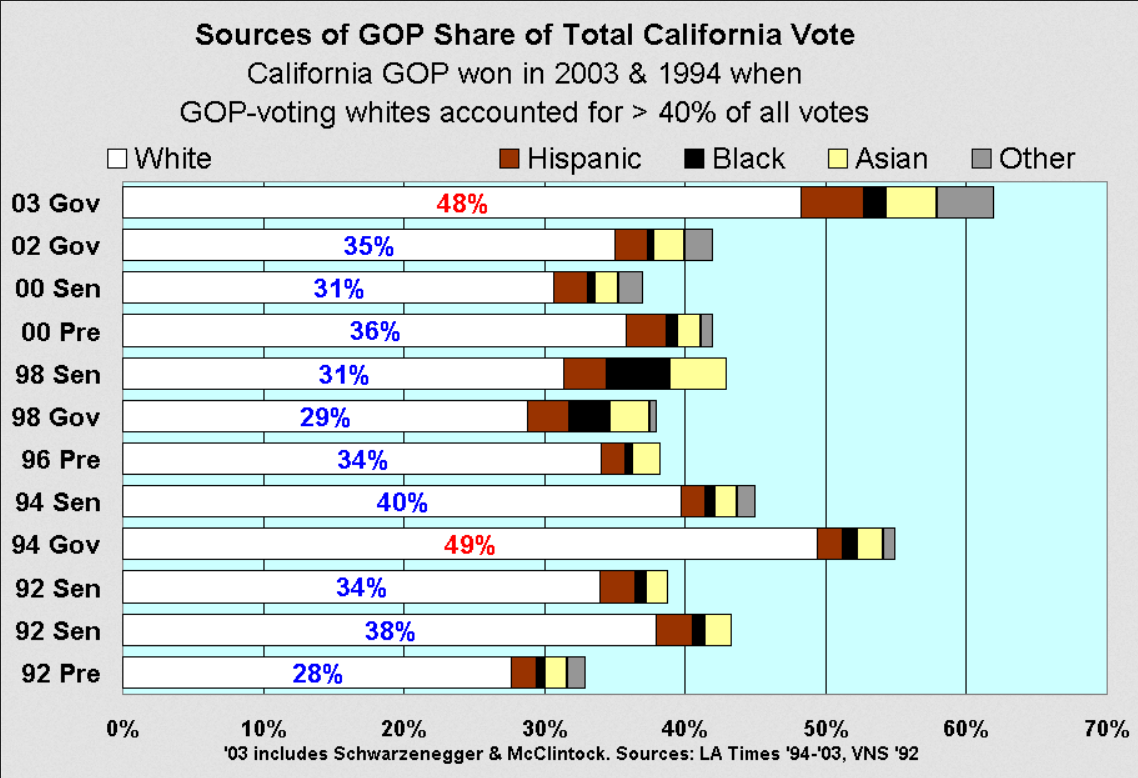 The table above shows that in the two GOP wins, marked in red, Republican-voting whites comprised almost half of all the votes cast in the entire state. (Californians vote relatively heavily for minor parties, so 48 percent of all ballots is usually more than enough to win.)

In the ten losses, however, marked in blue, Republican voting whites never exceeded 40 percent of all the votes cast, and often came nowhere close.

In comparison to this overwhelming factor, trivial fluctuations in GOP popularity among minorities were simply insignificant.

The bottom line: the conventional wisdom that California Hispanic voters currently hold a veto over attempts to cut down on immigration is just an innumerate myth. (Further, a healthy minority of Latino citizens don't like illegal immigration anyway, as Cruz Bustamante's hapless strategy of running for governor of Mexifornia demonstrated.)

Memo to Karl Rove: Assuming you don't do the perp walk out of the White House over the Valerie Plame outing, you're going to need an issue for your boy to run on next year. Iraq won it for you in 2002. But that's not looking like a real vote-grabber in 2004. Your amnesty idea (in the form of drivers' licenses for illegal immigrants) proved a disaster at the ballot box in California this month.

If you really are the genius your press clippings say you are, you'll figure out it's time to reverse field.

"GET THE WHITES RIGHT, CALIFORNIA [and the U.S. too, for that matter] IS BRIGHT!"