Wisconsin Governor Scott Walker’s turn towards immigration patriotism has infuriated the national Main Stream Media and drawn new attention to a politician best known for taking on the unions in what was once the heart of the American Left. But the “root cause” of Walker’s rise is something that Walker himself probably doesn’t even recognize—the challenge to the communitarian “Wisconsin Idea” posed by the state’s black population.

The “Wisconsin Idea” is the concept that “the boundaries of the university are the boundaries of the state”—a statement of faith in the old Progressive idea that the university ought to do its utmost to spread the benefits of its knowledge to every citizen. First articulated by UW President Charles Van Hise in 1904, this mission took shape in various programs designed to bring useful arts and technology directly to the people, in Wisconsin Public Radio (“The Ideas Network”), and of course, in working closely with the state government. Not surprisingly, Van Hise used his friendship with his former classmate Robert La Follette to create influential legislation taken for granted today, “including the nation’s workers’ compensation, tax reforms, and public regulation of utilities” [History of the Wisconsin Idea, University of Wisconsin]

To this day, the official center of Downtown Madison is a pedestrian-only, shopping/dining district called, fittingly, “State Street.” It runs for about a mile, and at one end is the State Capitol, while at the other end is UW-Madison, Wisconsin’s flagship university. It’s obviously designed to be the symbolic cultural center of the state, physically linking the two great institutional expressions of its people. For the Wisconsin Idea to work though, Wisconsin has to remain Wisconsin and retain its highly idiosyncratic culture.

The culture in Wisconsin is a simultaneously socially conservative and egalitarian, containing co-ops, labor unions, and until recently, one of the most generous social welfare programs in the country. By American standards, relatively few people from other states move to Wisconsin, and relatively few people from Wisconsin move to other states. Wisconsinites are even less likely to move away from their small towns. It is also somewhat religious for a northern state.

Wisconsin is an exaggerated version of everything Nietzsche loathed about the Germany of his day. And as it happens, half of all whites in Wisconsin claim German ancestry, four times greater than the next largest ancestry. No other state’s white population is so dominated by one ancestry. The vast majority of these people’s German ancestors immigrated to Wisconsin during Nietzsche’s lifetime, and that population created the culture of the state. The Wisconsin Idea is really a derivation from Germany’s late 19th century social-democratic movement.

Ethnic similarity and a unique political culture has made Wisconsin into what I call a “state” state, like Texas or Minnesota (Wisconsin’s slightly more white-collar sibling). It has a strong identity and culture that binds everyone in the state together.

For example, New Glarus Brewing, a local beer favorite, does not allow its product to be sold outside state-lines. In maps of favorite sports teams by county sorted by Facebook “likes,” Wisconsin is a solid block. Many of you have seen the maps of favorite sports team by county, based on Facebook “likes.” If Wisconsin has a team, that team has Wisconsin, be it Badgers, Brewers, or Bucks. And football’s Green Bay Packers are about as Wisconsin as it gets—an extremely well-run football team owned collectively by the community as a non-profit.

But there have been some important changes since “Fighting Bob” La Follette’s days that threaten the spirit and specifics of the Wisconsin Idea.

Population wise, the Great Migration of blacks to the north hit Wisconsin less than it did many others, but those who did arrive have formed a pocket of dysfunction and government dependence in the midst of the communitarian ideal. Indeed, as Steve Sailer suggested, the generous welfare system created by the Idea may have been the very thing that lured the lumpenproletariat of the African-American community. See TNR: “The Unelectable Whiteness of Scott Walker”–Nature and Nurture in Wisconsin. 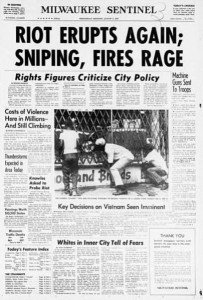 Wisconsin’s black population is concentrated in Milwaukee, which has now has the highest white/black segregation in the country and an extremely high degree of political polarization. (Pictured right, a newspaper from 1967 Milwaukee.)In Wisconsin, the cities are blue, the countryside is purple, and the suburbs are deep-red (in Milwaukee). Milwaukee’s collar counties (i.e. the ones surrounding cities) went for Romney by two or three to one [Democratic, Republican voters worlds apart in divided Wisconsin, by Craig Gilbert, Journal Sentinel, May 3, 2014] These are people whose grandparents and great-grandparents elected three different socialist mayors.

But while demographic change was upsetting Wisconsin politics, American politics was becoming much more nationalized. As the ethnic mix of the country has diversified, the Republican and Democratic brands are all but standardized nationwide. And it seems likely that ambitious political leaders will emerge from places deeply interested in politics, like those Milwaukee area counties that have some of the highest voter turnout in the country [Far from creating fatigue, partisan battles engergize voters, by Craig Gilbert, Journal Sentinel, May 10, 2014].

Governor Scott Walker is the confluence of these trends. Walker, the only incumbent governor in American history who has ever won a recall election, is that rare Republican who stands his ground, and wins. But Walker was first elected during the Tea-Party wave of 2010 and his brand of politics is the same Tea-Party type found from coast-to-coast; there is nothing particularly Wisconsin about it at all.

Not surprisingly, Walker is hacking away at the “Wisconsin Idea” with ruthless efficiency. Walker rose to national fame when he and the Republican legislature pushed through a bill stripping public union workers of their collective-bargaining power, a shocking reversal for the first state that ever granted state workers that power. More recently, Wisconsin has become a right-to-work state. And Walker is even proposing a $300 million cut in state funding for the University system over two years, one of the largest such cuts in American history. This year’s state budget even eliminated the “Wisconsin Idea” as the university system’s mission statement, though Walker later backed down and blamed a “drafting error” [Walker backs off removing “Wisconsin Idea” from UW mission, by Scott Bauer, Associated Press, February 4, 2015].

And yet the staunchest defenders of the “Wisconsin Idea” can’t admit the first domino that started the fall was the insertion of a dysfunction black population in a once successful, homogenous, and unique culture. Wisconsin’s model of parochial egalitarianism is an outgrowth of a particular people and is designed for a racially homogenous population.

Many who claim to be on the Right would probably be happy to do away with the Wisconsin Idea. Not me. I see it as just one more unique community that is being erased by Universalism and the social chaos that comes from superficial understanding of “diversity.”

And, as immigration patriots well know, what you get with mass immigration into a state or a country isn’t unity or equality—but the destruction of everything that made that particular community special.

Ryan Andrews [Email him] is the author of The Birth Of Prudence. Buy it here in Paperback, or here as a Kindle.