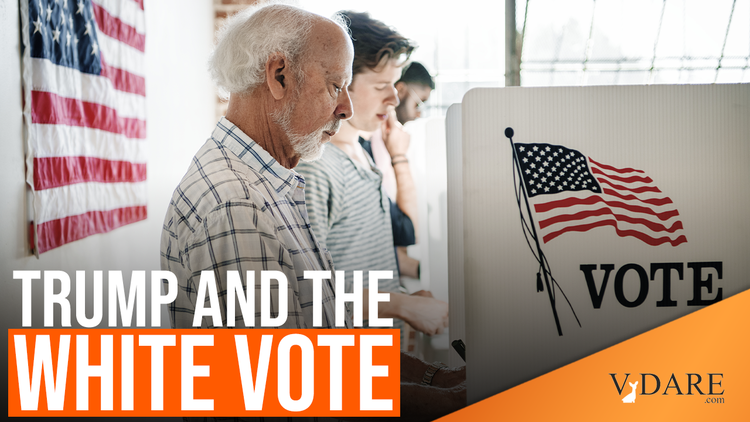 The Race Tightens—But Trump Still Does Poorly With White Vote. Protecting the Suburbs and The Immigration Moratorium Can Turn That Around

President Trump’s chances for re-election appear better. Battleground state polling shows him within striking distance or ahead in most of the battleground state contests. Joe Biden appears aimless and prone to gaffes. Meanwhile, Trump is returning to his old 2016 vigor and to the National Conservative message that won him the presidency. But Trump’s polling numbers with whites are still a major concern. He’s losing college-educated whites and doing subpar among his base of non-college educated whites. To win back the white vote he must continue to emphasize the Left’s threat to the suburbs and tout his immigration moratorium. These two ideas resonate with white voters and provides a sharp contrast to the lunacy of Biden’s platform.

The bad news about Trump’s support among whites was delivered by a Reuters poll last week: his lead among non-college educated whites had dwindled to a 12-point advantage over Biden—46% to 34%. That’s a nine-point decline from Trump’s 21-point advantage in May. In 2016, Trump won this demographic by 34 points. Biden leads by eight points among college-educated whites—48% to 40%. Hillary Clinton beat Trump among this demographic by only two points. The number of non-college educated whites who say they plan to vote has remained flat at 65% for most of the year. Meanwhile, the percentage of minorities and urban residents who say they plan to vote has risen [Supporters who helped Trump win presidency lagging in motivation this year, by Chris Kahn, Reuters, September 8, 2020].

This is not a new problem for Trump. I covered it in June when many polls showed him down by double-digits and commentators predicted the election was already decided. At that time, the president couldn’t seem to figure out his campaign message. He was torn between the uninspiring Establishment agenda promoted by Jared Kushner and the national populism that made him president. Since then, however, Trump has settled on a strong message that emphasizes Law and Order and strong opposition to immigration (illegal only, alas, although he has started to emphasize that he’s cut the refugee influx and that Biden will increase it). Some polls show a much tighter race—the Real Clear Politics average now (September 13) has Biden ahead 7.5%. However, Trump’s problem with whites still remains.

Even the polls that show a close race don’t hide this disconcerting fact. Thus the latest Rasmussen Reports poll found Trump down by only two points (46%-48%) i.e., within the margin of error. But, in details available only to Rasmussen’s premium subscribers, Trump leads Biden only by a disgraceful four points among whites (49%-45%).

Apparently his Law and Order message connects with this demographic. If Trump’s Hispanic support holds steady for election day, it will forever put to bed the lie that Republicans need to embrace Amnesty to win. Trump is hardly pandering to Hispanics—as in 2016, he doesn’t have a Spanish-language website—but he’s doing better among them than John Amnesty McCain.

But even if that Hispanic support stays firm, Trump will still lose if his weak white support doesn’t improve. So why is Trump struggling with whites?

College-educated whites are supposedly less enthusiastic for Trump because of his bombastic style and perhaps because they know being a public Trump supporter will damage their social respectability and even hurt their career [America Is Divided by Education, by Adam Harris, The Atlantic, November 2018]. Additionally, many college-educated whites have been unquestionably been affected by the Great Awokening and now embrace far-Left positions on race and immigration.

Oddly enough, college-educated whites benefitted immensely from Trump’s economic policies, yet they are still reluctant to support him [Contrary to what the media reports, middle class Americans are surging, by Stephen Moore, The Hill, January 6, 2020].

Non-college educated whites are a more complicated matter. While they may be souring on Trump, they aren’t turning to Biden either. The Democratic nominee’s support among non-college educated whites is only marginally better than Hillary’s roughly 30 percent support in 2016. This demographic appears more turned off by politics rather than turned off by Trump. Some commentators commonly blame coronavirus for Trump’s sagging support [How Trump Is Losing His Base, by Stanley Greenberg, The American Prospect, September 8, 2020]. COVID-19 and the subsequent lockdowns ravaged working class communities and they have yet to fully bounce back.

But Trump can still win over these voters and ensure himself victory. There are two pitches he has that can win back these white voters: the Democratic threat to the suburbs and the (temporary) immigration moratorium.

Trump has repeatedly warned Americans about the Left’s plans to destroy the suburbs. He argues Biden wants to “abolish the suburbs” by filling them up with crime and low-income housing. The Main Stream Media mocks this claim, but it is true. Biden wants to bring back Obama-era policies that would impose Section 8 housing and scrap zoning laws that prevent low-incoming housing in the suburbs. The Democrats’ weird tolerance for riots, many of which are now reaching the suburbs, also shows the immense threat Biden poses to them [Joe Biden’s disastrous plans for America’s suburbs, by Betsy McCaughey, New York Post, July 21, 2020].

Trump continues to harp on this threat in his public statements. At a rally this week, he mocked how Democrats will allow Antifa to come into suburban neighborhoods.

He also warns how Democrats will have total control of every institution and will use that to crush Middle America.

Democrats are clearly worried this message will hurt Biden in the suburbs. Focus groups of suburban voters reportedly find concern about the chaos and fear it may come for them next. “White women who have college degrees are starting to really get sick of this,” one strategist told Politico [Why Biden could still lose the suburbs to Trump, by David Siders, September 7, 2020].

Democrats have no way of soothing these fears as a significant part of their base backs the riots, supports radical “criminal justice reform,” and calls everyone who opposes the anti-suburb plans “racist.”

This suburban pitch will gain in potency as the election approaches and the unrest shows no sign of abating.

The other pitch is mostly to the economically ravaged working class. Over the summer, Trump expanded and extended his immigration moratorium to bar most foreign workers from the U.S. for all of 2020. The move would protect over half a million American jobs as the U.S. tries to recover from coronavirus for the rest of the year. The moratorium is wildly popular, with the latest poll showing 62 percent of Americans support it—even a plurality of Democrats say it’s a good idea.

The moratorium is a powerful wedge issue for Trump. It shows him protecting American workers, but no Democrat will dare risk offending Open Borders advocates to support it. Instead, they will be forced to side with foreign labor and big corporations

Inexplicably, however, Trump continues to ignore this signature immigration achievement. He has not brought it up since issuing his revised order in June. He didn’t mention it in his Republican National Convention address, it’s not listed as one of his immigration accomplishments on his website. He hasn’t brought it up on the campaign trail.

There is no good explanation for this omission—not even reluctance to draw attention to a rare Jared Kushner defeat. Trump is willing to talk about protecting workers from foreign competitors, as attested by his public battle with the Tennessee Valley Authority. He also includes his opposition to foreigners displacing Americans in his campaign platform. But for whatever reason, the moratorium is forgotten.

Trump must remember it soon if he wants to turn out his base for election day. The immigration moratorium, along with his trade policies, amply demonstrates his commitment to American workers. The Democrats want American jobs taken over by either mass immigration or outsourcing. Trump stands against that and will fight for good jobs for the working class. He needs to strongly make the economic case for immigration patriotism to shore up his numbers. The moratorium makes this case better than any other policy.

Ideally—here’s an idea!—he should promise to extend it until the U.S. is back to full employment.

This election is still up for grabs and Trump looks better now than he did in the dismal days of summer. He’s not running on the Jared Kushner agenda anymore—he’s back to America First populism. Trump just needs to continue hammering Democrats on the suburbs and remember (and extend) the moratorium.

The white vote needs a good reminder of how the Democrats want to destroy their lives. 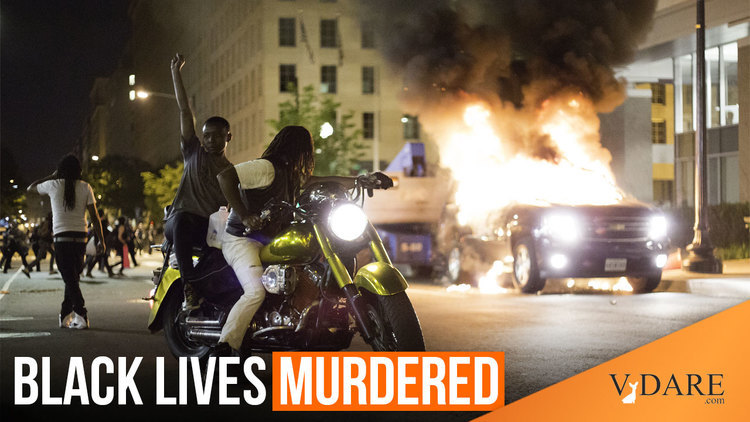