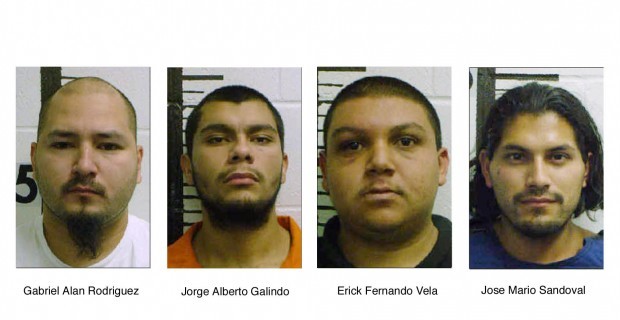 The Nebraska Bank Killers: Were They Or Weren't They?

On September 26 a murderous Nebraska bank robbery shocked the nation.

“They came shooting into the U.S. Bank branch Thursday morning with handguns, and when they were done, four longtime bank workers and a customer were dead.”

A Nightmare in 40 Seconds (washingtonpost.com)

Most American bank robbers ask for the money before shooting. Perhaps these robbers, all Hispanics, were expecting the bankers to resist. Our Allan Wall tells us that banks in Mexico are guarded by men with submachine guns.

It's reported that the robbers watched the movie Scarface as they planned the crime. Scarface is about an incredibly violent Hispanic immigrant gangster in Miami. (Tagline: He loved the American Dream. With a Vengeance. Quotes from the movie can be found here. Warning: really vile language, in both English and Spanish.)

Were these Hispanic robbers immigrants? I'm a detail-oriented person who likes to get the facts straight. You would think that I could tell you exactly whether any of them were criminal aliens.

The problem is that neither the media nor law enforcement officials seem to know–or care.

I called people all over Nebraska looking for a definitive answer. I started with Larry Holmquist of the Omaha FBI. He said that the local police were more likely to know. But he thought that three out of four men had been raised in Nebraska's Madison County and had gone to school there.

I next spoke to Captain Leon Chapman, of the Norfolk PD. He didn't know for sure either.

Let me explain what “for sure” means in this case. If someone from Mexico crosses the Rio Grande with a small child, that child is a Mexican citizen. Despite the fact that he grew up in the United States, and may even speak with a Cornhusker accent, he's still legally the Mexican government's responsibility. If one of the Norfolk suspects has a Mexican birth certificate, he will certainly appeal to the Mexican consulate. It will demand his rights under the Vienna Convention on Consular Relations.

Which means that the Mexican government will be trying to help him get away with murder.

I then spoke to Craig Nelsen of ProjectUSA, who grew up in Norfolk, Nebraska. (Click here to see his account of debating immigration enthusiasts with Peter Brimelow on PBS.) Craig said that the population of Norfolk has changed visibly, with a Hispanic influx in the last ten years. Needless to say, crime had increased too. When Craig lived in Norfolk in the '80s, if someone stole a stereo out of your car, that was a crime wave.

“But Norfolk Mayor Gordon Adams said the heritage of the men is unimportant. 'There has been a lot of concern about American and Hispanic relations,' he said. 'But these were just bad people. They weren't immigrants. They grew up here.'”

So I asked Mayor Adams if he knew for sure that the killers were citizens. He said “All I know is what I read in the papers.”

I asked him about the increase in crime following the increase in the Hispanic population. He said that he'd “hesitate to say that it was caused by people coming here.” He couldn't say it was more or less crime, but rather different crimes. “Some come up to work, some come to sell drugs.” Methamphetamine has become a serious problem in Madison County (which may explain the pointless shootout in the bank) and “There's subsidiary crime associated with drugs.”

I asked Mayor Adams specifically about an increase in crimes of violence. He told me that this was not the first violent crime Norfolk (population 23,878) has had within the last year.

The police had found two bodies dumped without ID by the Elkhorn River. It was a Hispanic vs. Hispanic crime, drug-related. [AP, September 9, 2001 “Killings described as execution-style“]

Recently I did an article on the uproar after a Philadelphia paper had reported the race of some wanted criminals. (It didn't mean to. It just published their photographs.) The paper's original story was provoked by the fact that Philadelphia is a “High Intensity Drug Trafficking Area.” It has a federally funded HIDTA task force.

Guess what? Northeastern Nebraska is now also an HIDTA. That status has been approved by the bureaucrats who approve such things. But no funds have been found to do anything about it.

At the end of my quest, this is what I had: Three of the Norfolk bank killers appear to have been born in the U.S., and are therefore American citizens. One of them appears to have been a lawful permanent resident, very probably a Mexican citizen.

In June of last year, we posted an article called “Immigrant Crime: Who Wants To Know?” The answer seems to still be “Nobody.”

And you can add to that “Son of Immigrant Crime.” Immigration, over time, has the effect of boosting the crime rate among the native-born by changing the demographic character of the population.

Immigration enthusiast writers typically compare immigrant and native-born crime without distinguishing what the Mayor of Norfolk called in the Washington Post story “Americans” from native-born members of recent immigrant enclaves.

Call it the Michael Corleone problem. In Mario Puzo's The Godfather, Michael Corleone is a native-born American, patriotic enough to volunteer to fight the Japanese in World War II. But by the end of the film, he's a full-blown criminal because Family tradition is stronger than Americanization.

Real life mobster Salvatore Gravano was born in America, the son of an illegal alien from Sicily. He reportedly found The Godfather as inspiring as the killers in Norfolk found Scarface, in spite of the fact that his generation of Italian-Americans hadn't been told that they were an oppressed minority.

Another “Son of Immigrant” example: the Yemeni-American alleged terrorists who were born, raised, and arrested in Lackawanna, New York. Legally, they are as American as John Walker Lindh. But are they?

All part of the blessings of diversity.

When crimes are blamed on inanimate objects like guns, on violent movies, or on video games, there's a call for debate, legislation, and action.

I'm waiting patiently for the media call for debate, legislation, and action on immigration–and the unassimilated children of immigrants. Very patiently.