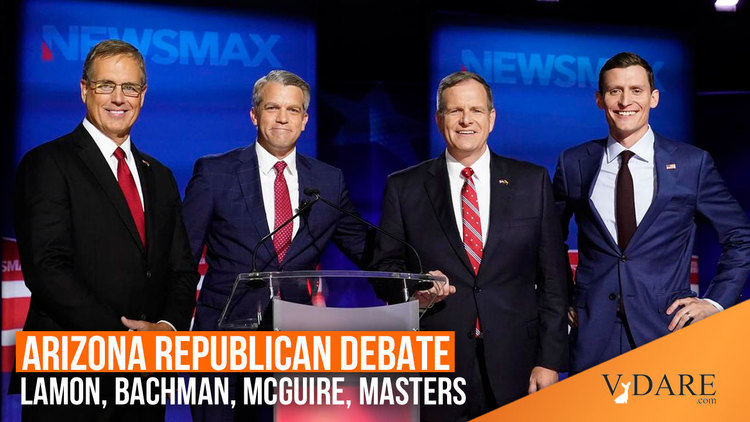 “This election is about the future...actually it’s an election about whether we’re going to have a future at all,” Arizona Senate candidate Blake Masters said at the GOP primary debate last week. “In 30 years, my boys will be my age, and I want them to grow up in a country we recognize.” The National Question loomed unusually large in the Copper State debate. The top Republican contenders—businessman Jim Lamon and Arizona Attorney General Mark Brnovich—promise to be tough on illegal immigration and the border. But Masters, an associate of PayPal founder Peter Thiel, stands head and shoulders above the rest. This is a race in which immigration and the future of the country dominate the discussion. Only Masters proves to be the true immigration patriot.

“In 30 years, my boys will be my age, and I want them to grow up in a country we recognize.” - Blake Masters pic.twitter.com/RujOGRfH45

Masters is upfront about his immigration patriotism. Since announcing his bid, he has declared he wants to cut legal immigration by half, reform chain migration and guest worker policies, and is open to eliminating the H-1B visa, which corporations use to replace American white-collar workers with cheap foreign labor.

One thing that makes the Thiel associate stand out: his willingness to discuss the Great Replacement. “The Democrats, they hope to just change the demographics of our country,” he said in a podcast last Spring. “They hope to import an entirely new electorate. Then they call you a racist and a bigot.” He doubled down on this view in a subsequent tweet.

The Democrats want open borders so they can bring in and amnesty **tens of millions** of illegal aliens — that’s their electoral strategy. Not on my watch. pic.twitter.com/t9NQmEmdzG

Speaking in an ad released June, Masters offered this summary of the Democrats’ plan to replace the Historic American Nation:

It’s not just about border violence … or fentanyl pouring in by the ton … or importing 20 million illegals and giving them amnesty. … No, it’s about a small group of elites who want to destroy this country. That’s why the Democrats push open borders. It’s time to militarize this border. We are going to end this invasion.

It’s a powerful ad. Leftists are afraid of such a message because it’s true, which, in turn, is one reason the Treason Lobby subsidiary America’s Voice said it was “one of the most vile and dangerous nativist ads we’ve seen.”

This is the ad that fake “experts” say “encourages political violence” — all it demands is that we enforce our laws https://t.co/GKvgeFFL32

Masters is also one of the few Republican figures to dare mention the color of crime. “It’s people in Chicago, St. Louis shooting each other,” he said during an interview. “Very often, you know, black people, frankly. And the Democrats don’t want to do anything about that” [Blake Masters Blames Gun Violence on ‘Black People, Frankly,’ by Roger Sollenberger, Daily Beast, June 6, 2022]. Naturally, Leftists attacked him for it, but he refused to apologize or disavow his comment.

Masters is a breath of fresh air from the usual Republicans who capitulate at the first sight of a racism accusation from the Leftist mainstream media. Instead, the Thiel-backed candidate stays on message and keeps telling the truth.

Masters’ only failing: he wasn’t always solid on the issue. As a 19-year-old college student, he blogged in favor of a more libertarian approach to immigration [The evolution of Blake Masters, by Matthew Kassel, Jewish Insider, June 7, 2022]. Thankfully, he grew up and learned the truth about immigration. Youthful follies can be overlooked when you’re one of the few candidates to unapologetically note the demographic transformation of America.

How hardline is he? “No citizenship for people who come here illegally, ever,” including DREAMers, he said recently.

No citizenship for people who come here illegally, ever pic.twitter.com/GvbrMYvnKM

His America First message earned the endorsement of Donald Trump, which boosted him to the top of the field. The latest Real Clear Politics polling average puts him 10 points over Brnovich, his nearest competitor.

While Masters is certainly better than his rivals on immigration, last week’s debate did show improvements compared to recent Republican history. Every candidate rejected Amnesty. Not so long ago, Republicans openly ran on legalizing illegal aliens. Now every candidate knows that’s a death sentence at the ballot box.

Lamon’s issues section on his campaign website documents his commitment to border security. The page emphasizes that America is being invaded, and that strict policies are required to halt that invasion. He also promises no form of Amnesty and a crackdown on foreigners who break the law to stay in the country. Lamon even says illegals should be sent to America’s Pacific Islands to do hard labor as punishment for their flouting of the law [Arizona Senate Hopeful Wants to Send Immigrants to Pacific Islands for Hard Labor, by Jason Salzman, Copper Courier, June 9, 2022].

Better still, and quite remarkably, Lamon would abolish Birthright Citizenship, essential to repairing the demographic damage done by Biden’s border treason but an issue most Republicans won’t touch.

Even Masters has apparently not mentioned birthright citizenship, although he might oppose it given his remarks about never giving citizenship to anyone who lands here illegally, including DREAMers.

But as for legal immigration, Lamon praised it, and the laws and policies that allow it. “We have the most beautiful, ample legal immigration system on the planet, and that‘s the way it should be,” he said at the debate.

Doesn't understand the issue at all.

Lamon: "We have the most beautiful, ample legal immigration system on the planet, & that's the way it should be."

Tell that to the Americans who have seen their wages & jobs destroyed by mass immigration. We need an immigration moratorium. pic.twitter.com/OgGFqLleA4

That statement alone disqualifies Lamon as a serious contender vis-à-vis the National Question. No Republican should call America’s mass immigration policies “beautiful.” Even if he favors ending Birthright Citizenship, that doesn’t make up for his continued support for mass immigration.

Significantly, Lamon is still trying to attack the frontrunner as weak on immigration. A new ad hits Masters over his youthful blog posts and claims they show the Thiel associate is in favor of open borders [New ad takes dig at Blake Masters over border security, by David Sivak, Washington Examiner, July 16, 2022]. Until Lamon talks about the dangers of demographic change and mass immigration, he really has no grounds to attack Masters, but this shows Lamon knows immigration is the hot issue in the campaign.

Brnovich is the only one of the three who holds public office. He touts his record on immigration to show he is solid on the issue. He has been one of the most zealous GOP officials in challenging Joe Biden’s Open Border policies in court. He sued the Biden Regime because it halted deportations for 100 days and ended border wall construction. He defended Trump’s Public Charge Rule and Remain in Mexico policy in court and led a lawsuit over Biden’s poor immigration enforcement. Additionally, Brnovich wants Arizona Gov. Doug Ducey to declare an invasion at the border to allow the state to enforce immigration law. The invasion declaration is one of the most promising ideas from Republicans to deal with the border crisis. Because Biden won’t enforce the law, it’s obviously up to the states to curtail the invasion. Brnovich is a leader on this subject.

Arizona is a border state directly impacted by the illegal-alien invasion. The state’s Republicans must send the message that they want the invasion ended and mass immigration curbed. Masters appears to be the only candidate who can do so. Indeed, that an avowed immigration restrictionist—who says the Democrats want to replace the Historic American Nation, no less—is the frontrunner is a massive whitepill for immigration patriots.

If Masters wins the primary, as expected, then defeats Democratic incumbent Mark Kelly in November, immigration patriots will know a new GOP is upon us.

But a Masters victory will also send a message to the GOP: No more can Republicans hope to sound tough on illegal immigration while being soft on legal immigration. Only true immigration patriotism can secure the mantle of America First.