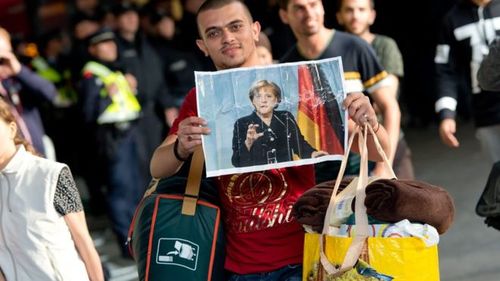 The "Great Replacement" Is Killing The EU—Long Live A Europe Of Nations!

It looks like the country that will end the European Union is not Greece, but Germany. Chancellor Angela Merkel has been enjoying plenty of positive press for her efforts to welcome hundreds of thousands of “refugees” to Germany and force them on other European countries. Yet the European Union is straining under the burden, and several governments are already in open opposition to Merkel’s plan to accept nation-breaking numbers of Muslim immigrants. Only months after the Greek financial crisis pushed the European Union to the brink, the issue that is coming to define Continental politics is not economics, but demographics.

The breaking point may come sooner than anyone expects, as Merkel is trapped by her own rhetoric. The Main Stream Media, gleeful at the prospect of non-European Europe, is hailing Merkel as a “hero” who is leading the way by showing “compassion” to refugees [Angela Merkel: Europe’s Conscience in the Face of a Refugee Crisis, by Adam Lebor, Newsweek, September 5, 2015]. But the problem with defining immigration policies in these simplistic terms is that it suddenly becomes immoral to speak of any upper limit on immigration.

And sure enough, underneath the hosannas to “Mama Merkel” by migrants and their MSM cheerleaders, one can hear the faint signals that Merkel is trying to find a way out.

Even as Merkel says Germany’s willingness to accept Third Worlders paints “a picture of Germany which can make us proud of our country,” she’s also pleading for the “European Union to pull its weight” and trying to impose “quota system” for different countries. Of course, as Merkel is also admitting the “breathtaking” flow of invaders will “occupy and change” a once-successful European country, other nations are beginning to openly wonder why they should go along with Merkel’s conception of the European Union as a demographic suicide pact [Migrant crisis: Influx will change Germany, says Merkel, BBC, September 7, 2015].

The leaders of the Czech Republic and Slovakia have openly rejected quotas, defying France, Germany, and the leadership of the European Union [Czech, Slovak leaders reject refugee quotas, Deutche Welle, September 7, 2015]. Poland is reluctantly accepting more migrants, but is protesting that is already struggling with refugees from the conflict in Ukraine. The Wall Street Journal, inadvertently revealing what is actually motivating many of these “refugees,” notes “Poland is scant with welfare benefits compared with many nations in Europe, a factor that discourages mass immigration” [Poland says it will accept more refugees than previously promised, by Martin M. Sobczyk, August 31, 2015].

The Journal, at least the editorial page, would never admit such a rationale is behind Third World immigration to America as well.

And of course, there’s Hungary. President Viktor Orban highlighted the obvious problem with Merkel’s plan when he wondered aloud how a quota system would function in Schengen Area countries where passport and immigration controls have been abolished. “Has anyone thought this through?” he asked rhetorically [Stream of refugees through Austria slows as Hungary PM slams EU quotas, Fox News, September 7, 2015].

The obvious answer is no. How can you, when common sense objections to the wisdom of admitting hundreds of thousands of dependents lead to accusations that you are responsible for the deaths of children?

Yet the answer to why Germany is so fanatically committed to pushing refugees on Europe may lie in geopolitics rather than morality. There is a contradiction at the heart of the European Union’s (read: Germany’s) approach to the refugee crisis. On the one hand, refugees represent an economic burden to those core nations who will end up accepting most of the migrants, which is why France and Germany are so insistent on other countries taking some. On the other hand, refugees are also a useful way to extend the European Union’s control over some of its more independent-minded members, especially Hungary and other Eastern European nations.

After all, if the European Union can establish “refugee quotas” for its member states, those states have effectively lost control not only of their borders, but of any ability to defend their cultural identity. Indeed, Hungary’s Orban has explicitly recognized this, saying what is at stake is the “survival or disappearance of European values and nations, or their transformation beyond recognition.”

If you are trying to extend the power of the European Union, however, this is a good thing for two reasons.

Just as immigration helped thwart the independence movement in Quebec, so will a huge immigrant population make it difficult any country to possess the requisite social capital to strike out on their own.

This is also the explanation for why Merkel’s compassion was notably absent when it came to her fellow Europeans in Greece who saw their lives destroyed because of debts owed to German banks.

Indeed, the MSM is openly celebrating the potential of the refugee crisis as a way to deconstruct nationhood, especially in Germany. Der Speigel snickered that Germans will simply have to “get used to the idea that they live in a country of immigration” and abandon “the next illusion…that there is such a thing as controlled immigration.” This is necessary to create a more “cosmopolitan and generous” “New Germany” and “fundamentally change” the country [Dark Germany, Bright Germany: Which Side Will Prevail Under Strain of Refugees? August 31, 2015].

Evidently, the Obama strategy of deconstructing your own country has crossed the Atlantic.

Of course, the problem with all this: European leaders, including Angela Merkel, were already admitting “multiculturalism has failed” even before this crisis. Famously multicultural, generous, and ethnomasochist nations such as Sweden have been unable to “integrate” their Third World populations.

And even in the face of unabashedly overt repression, nationalist parties are surging across the continent.

From the gang wars in the banlieues of France to the grenade attacks in Malmo, Sweden, we already have all the evidence we need to see how this latest attempt at “integration” is going to play out. A few months from now, there will be the inevitable articles in the MSM quoting “underprivileged” Arab and African immigrants who are having a hard time competing in the First World country.

Rather than the recipient of gratitude, countries such as Sweden, Germany, and France who accept these refugees will find themselves the targets of riots, political agitation, and extremist political movements.

And that’s the best case scenario. As ISIS is already bragging about how they are using the refugee crisis to smuggle in operatives, it doesn’t take much to imagine a far worse fate for the great nations of Europe [Refugee crisis: ISIS fighters in Europe? Islamic State Extremists Exploit Refugee Flow, Waiting to Launch Attacks, Militant Operative Says, by Michael Kaplan, International Business Times, September 7, 2015].

Not surprisingly, some people are beginning to notice that the best way to deal with the “crisis” is to try to avoid it altogether by getting out of the EU while you still can. And so a new poll shows that a majority of the British people want to leave the European Union altogether and strongly prefer David Cameron’s handling of the crisis to Angela Merkel’s moralizing [Britain wants to quit Europe: Shock new poll shows EU 'no' camp ahead for the first time as Cameron prepares to face down Tory rebels, by Simon Walters and Glen Owen, Daily Mail, September 5, 2015].

Like the Empire in Star Wars, the more the EU tightens its grip, the more “captive nations” may slip through its fingers.

In the short term anyway. The likely response from most European governments to opposition to refugees will be to ban criticism of immigration, put up more institutional barriers against anti-immigration parties, and essentially entrench the existing political order until it can complete the process of electing a new people. And unless leaders such as Merkel can actually be replaced in the years to come, the Powers That Be may pull it off.

Ironically, authentic European unity will be forged in the years to come by the battle of European patriots who work together against the European Union itself. Patriots from England to Poland understand that they face the same struggle, confront the same enemies, and share the same goals.

If anti-immigration parties and activists can succeed in saving their countries from the immigrant invasion, it will be the end of the current European Union. But it will be the beginning of something far better—a Europe of the nations that will safeguard the future of its peoples, rather than drive blindly on with what the French writer Renaud Camus calls “The Great Replacement.”