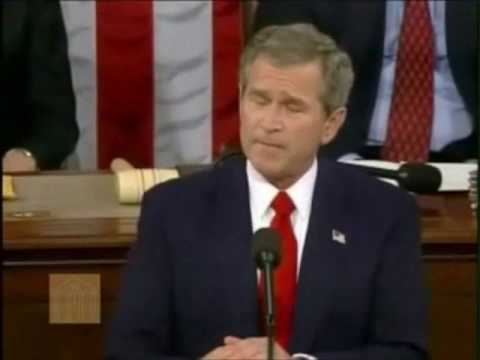 The Fulford File | SOTU in Spanish, Sort Of; etc.

SOTU in Spanish, Sort Of; etc.

George W. Bush's State of the Union address mentioned his new plan for "temporary workers," but not the bit about amnesty for illegals. (Which is not an amnesty, according to him. Pay no attention to that man behind the curtain, nothing to see here, folks, pass along.)

However, the White House staff doesn't want to emphasize even the temporary worker plan. It's not in the "New Initiatives in President Bush's State of the Union Address" section, nor is it mentioned in the "State of the Union Excerpts" list of money quotes that the staff wants quoted.

But it does get two paragraphs in the actual speech. What the President said was:

"Tonight, I also ask you to reform our immigration laws so they reflect our values and benefit our economy. I propose a new temporary worker program to match willing foreign workers with willing employers when no Americans can be found to fill the job. This reform will be good for our economy because employers will find needed workers in an honest and orderly system. A temporary worker program will help protect our homeland, allowing Border Patrol and law enforcement to focus on true threats to our national security.

"I oppose amnesty, because it would encourage further illegal immigration, and unfairly reward those who break our laws. My temporary worker program will preserve the citizenship path for those who respect the law, while bringing millions of hardworking men and women out from the shadows of American life."  [Applause.]

The SOTU address is also available in Spanish. The President didn't actually deliver this version, but it's the official White House translation. Since his inauguration, George Bush has been posting Spanish translations of all his State of the Union speeches, a form of pandering that even Bill Clinton apparently didn't engage in.

And of course, the Temporary Worker plan is mentioned in the official Spanish translation—with a curious omission.

The last sentences of the English and Spanish have this non-subtle difference: In English, Bush said "My temporary worker program will preserve the citizenship path for those who respect the law, while bringing millions of hardworking men and women out from the shadows of American life." This seems intended to promote sympathy for the poor illegals in the shadows.

But in Spanish, this sentence reads

This is not the same sentence. The translation talks about "emerjan de las sombras" ("Out from the shadows") but says nothing about "American life."

Perhaps the White House translator doesn't think that the concept of American life has much of an appeal to the Mexicans and Mexican-Americans who are the target audience for the Spanish translation of the SOTU.

I would also ask why the translator simply titled SOTU "El Discurso" rather than "Discurso sobre el Estado de la Nación" as the 2003 translator did.

Perhaps he thinks that the word Nación, (already flawed as a translation of the word "union" in "State of the Union ") would be confusing, again, to the Hispanic target audience.

After all, they belong to another nation entirely.

Reference the above piece using this permanent URL:
/articles/the-fulford-file-by-james-fulford-119#sotu

Mark Steyn says in a column the Chicago Sun-Times, (read it quickly before the Sun-Times archive system makes it go away) says that

"According to a RoperASW poll from last year, 83 percent of Americans support mandatory detention and forfeiture of property for illegal immigrants, followed by deportation.

" Eighty-three percent. Pretty big number. So who are the 17 percent who don't think illegal immigrants should be seized, jailed, have their property confiscated and deported?

"Well, they're pretty much everyone in the two major parties, plus the entire U.S. media. [llIegals the political 'untouchables' January 11, 2004]

''My late mother used to say it doesn't matter if you came to this country on the Mayflower or a slave ship, through Ellis Island or across the Rio Grande, we're all in the same boat now.''

Steyn makes a number of familiar-to-VDARE.com-readers points about Visa Express, Malvo, the White House's own illegal alien, terrorism and amnesty, et cetera, which are rarely seen in the mainstream media.

But I'd like to add that Ed Gillespie, chairman of the Republican National Committee [contact them], has quoted this Braun sound bite with approval in a press release.

And I'd like to point out the linkage between Ambassador Braun's point and the point made by two Democrat strategists in the Nation piece that Sam Francis discussed recently:

This just in: immigrants tend to vote Democrat ticket!

Will someone please explain this to Karl Rove?

Then he can tell George W. Bush.

Reference the above piece using this permanent URL:
/articles/the-fulford-file-by-james-fulford-119#braun