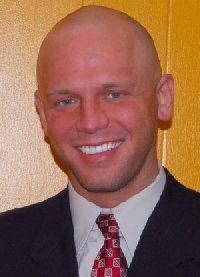 In the famous Dred Scott case, Justice Roger B. Taney wrote that blacks in American society, as constituted in 1857 “had no rights which the white man was bound to respect. A recent Michigan Court of Appeals decision on libel said the same thing, in reverse, about whites.

Journalist James Edwards (right) of the radio show The Political Cesspool, a white Southerner of Dissident Right sympathies, sued the Detroit News after Bankole Thompson, a Gambian immigrant who writes for the News, called Edwards a leader of Ku Klux Klan. 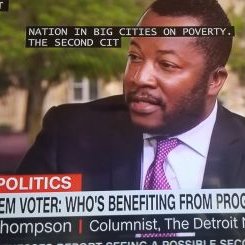 I mention all this blackness because the complaint against Edwards by Media Matters, the SPLC, and similar organizations is that he’s a white guy, doing a radio show for white people. The SPLC doesn’t seem to feel that journalism by people like Edwards is legitimate, and criticizes politicians for appearing on his show [Glenn McConnell Appeared on White Nationalist Radio Show, 'Political Cesspool,' in 2007, March 28, 2014] and giving Edwards press credentials [Radio show host with racist, anti-Semitic legacy given press credentials for Trump rally, March 2, 2016]

Of particular note to some in the Jewish community is the unprecedented support the Trump campaign has received among white supremacist groups like the Ku Klux Klan and its leaders like James Edwards, David Duke and Thomas Robb, the national director of the Knights of the Ku Klux Klan in Arkansas. All of these leaders — avowed racists and Holocaust deniers — have publicly expressed strong support for Trump and hailing him as the best candidate to lead the country with his slogan “make America great again.”

[Emphases added. The version of this online now was updated April 12, 2016 with a plainly malicious non-apologetic “clarification”—"James Edwards, the Memphis-area host of the radio show “The Political Cesspool” has no formal position with the Ku Klux Klan. He has informed The Detroit News that he believes a March 17 opinion column about his support of the presidential campaign of Donald Trump left the impression that Edwards served in an official capacity with the Ku Klux Klan.”]

I repeat: Edwards is a journalist, not a leader or member of any kind of Klan at all.

Historically, there are three “real” Klans—a post-Civil War resistance movement in the 1860s, a revived Klan dealing with the politics of the 1920s, and a third grassroots movement of white resistance to the Federal Civil Rights enforcement of the 1960s.

All of them are extinct. Modern Klan organization tends to be a form of Live Action Roleplaying having little to do with modern white advocacy. I personally had not heard of Thomas Robb before now, and I have always considered Duke a self-promoting nuisance—although even he might well be able to sue the Detroit News for calling him a Klan leader, because that is something he hasn’t been since 1980.

James Edwards sued the Detroit News for libel. Shockingly, the Michigan Court of Appeals rejected his case in a very significant and (for white Americans) ominous decision.

Three judges, Elizabeth L. Gleicher, (her father was head of the Michigan ACLU) Karen Fort Hood, (first black lady on the Court Of Appeals) and Brock A. Swartzle, (a white Methodist) signed a decision written by Judge Swartzle which starts out like this:

The Restatement (Second) of Torts § 559 lists “membership in the Ku Klux Klan” as the quintessential illustration of a defamatory statement. In an opinion piece in The Detroit News, columnist Bankole Thompson asserted that radio show host James Edwards is a “leader” of the Ku Klux Klan. There is no record evidence to suggest that Edwards holds a formal leadership position in the Ku Klux Klan, nor is there any record evidence to suggest that he is even a member. Notwithstanding this lack of formal relationship, Edwards has espoused views consistent with those associated with the Klan and, equally as important, he has repeatedly and publicly embraced several individuals who are strongly associated with the Klan. Mindful of Aesop's lesson, “A man is known by the company he keeps,” 1 [ Footnote goes to Aesop, The Ass and the Purchaser.] we hold that Edwards cannot make claims of defamation or invasion of privacy and affirm summary disposition in favor of defendants.

In other words, the facts don’t matter—even when the Main Stream Media outlet is apprised of them. This Michigan Appeals Court decision is shocking, not only in quoting Aesop to support the principle of “guilt by association,” but in going outside the record to refer to newspaper articles from the 1990s, when Duke, who has (like Patrick J. Buchanan, Alveda King and VDARE.com Editor Peter Brimelow) been interviewed on Edwards’s show, had already not been a Klansman for 12 years.

What the Michigan Appeals Court is saying, referring to Edwards’s stated opinions—his retrospective support for the late Confederacy, and his admiration for Confederate General Nathan Bedford Forrest—is what I said earlier:  a white man, speaking as a white man, in favor of other white men, has “no rights” which black journalists or courts are “bound to respect.”

This is sort of true—but what the Detroit News is reaffirming is the extension of the right of the MSM, gained as a by-product of the Civil Rights era, to lie even when their lie is pointed out to them. 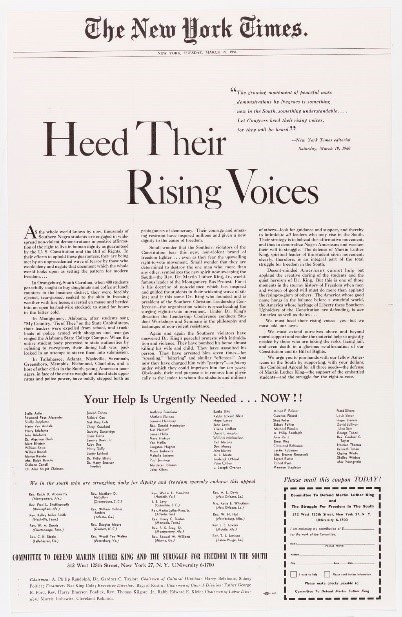 This precedent was first established in 1960. L. B. Sullivan, the white Montgomery Public Safety Commissioner, sued the New York Times for libelling him. The New York Times has frequently been willing to libel white Southerners on its own motion, but this was an advocacy advertisement, headed “Heed Their Rising Voices,” by the "Committee to Defend Martin Luther King and the Struggle for Freedom in the South":

Many of the statements in this ad were factually incorrect.  Furthermore, many of the black icons alleged to have signed it, hadn’t.

Nevertheless, the U.S. Supreme Court found, in the landmark decision New York Times Co. v. Sullivan that the press had, in effect, the right to publish untruths about things like this, as affecting government officials, since otherwise, citizens couldn’t protest an unjust government.

Two quotes about the right to lie, from Justice Brennan, writing for a unanimous court:

The writer (and Yale Law School valedictorian) Ben Stein described how this came about in 1987 in the pages of the American Spectator: Free to Libel | Reckless Disregard has a long history, February 1987, pp. 16-17. 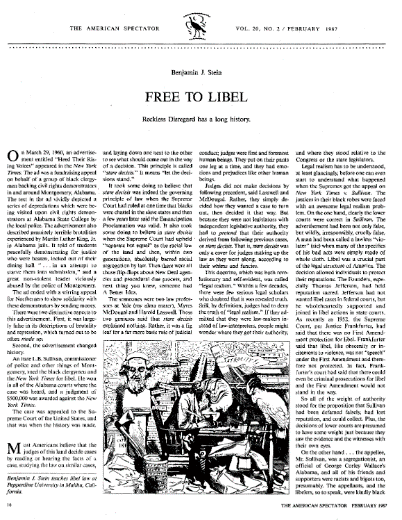 After explaining the theory of “legal realism” which is that judges tend to decide what they think the law should be and make up a rationalization for it, and also explaining that L. B. Sullivan had been indeed libelled, and had won in an Alabama court, Stein wrote that, nevertheless,

How could the same Supreme Court which had only a few years earlier thundered against racial segregation in Brown v. Board of Education now possibly turn its back on the brave fighters for racial decency and give half a million real bucks to the racist swine, no matter what the decisions said?

They couldn't. The result, as [legal realism theorists] Lasswell and McDougal would have predicted, was a unanimous Supreme Court reversal of the Alabama courts and a decision, penned by William Brennan, which set libel law on its head.

In a long, bizarre decision marked by an almost unbelievable misuse and abuse of precedents, Brennan quoted Mill, quoted Milton, quoted cases on totally unrelated matters such as membership lists and contempt of court, and announced a brand-new rule about libel. Of course, he said it was the same old rule, but no one quite fell for that. Somehow, this was a completely new rule and at the same time it followed all of the old cases. It was a clever trick, and for those who want to see it in action, the case can be found in your law libraries at 376 U.S. 254.

Of course that was in 1987—you can now read the decision online at Wikisource.

In one of my first articles for VDARE.com, I pointed out that black Affirmative Action hire Jayson Blair, who had famously lied to the NYT again and again, was working for a newspaper that had defended its own right to lie to the public. 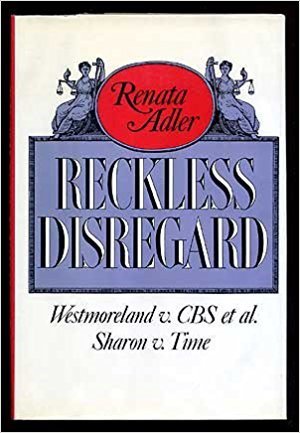 Ben Stein went on to discuss Renata Adler’s book Reckless Disregard, which examined two libel victims, Generals William Westmoreland, who commanded US forces in Vietnam, and Ariel Sharon, who commanded Israeli forces in Lebanon, and who, despite any verdict of history on their general characters, had in fact been libeled by CBS and Time Magazine.

Not only that, they could prove it in court. In spite of this, under the Sullivan “actual malice” standard, they couldn’t receive any damages. Malice, as opposed to incompetent untruthfulness, is extremely difficult to prove.

Stein wrote: “It was as if, as Miss Adler brilliantly notes, CBS and Time, with their huge war chest for litigation, had not only told lies, but were now able to enforce the lies in court.”

That’s what happened to James Edwards, too. Hopefully he will appeal.

Asked to prove that Derbyshire had described himself as “white supremacist”, Falk refused to respond, but one of his staff emailed a link to John Derbyshire: Who Are We?—The “Dissident Right”?, on VDARE.com—in which Derbyshire rejected the label “White Supremacist” (along with “Alternative Right,” and “White Nationalist”).

Adam Falk is, as you may remember, the college president who discriminated against Derbyshire, refusing to let Derb speak as an invited speaker at Williams College strictly because of the color of his skin. Of course, he said it was Derb’s “rhetoric" and we’ve also learned that there were threats of violence from the “Alt Left.” But I can’t believe that he would have objected to the much more hateful rhetoric of, say, Nikki Giovanni or Ta-Nehisi Coates—who are black.

So while the Sullivan decision was originally meant to protect black people who were telling untruths because their civil rights were arguably being challenged by white officials, it now protects the officials  and the media who deny the civil rights of white people. See the multiple cancellations of conferences held by American Renaissance, the National Policy Institute, and VDARE.com.

It also means that there is de facto no libel protection for public figures in the United States—above all if they’re white. It’s entirely rational (if hysterically denounced) that Donald Trump, one of the most comprehensively libelled public figures in American history, talked about “opening up” the libel laws during his Presidential campaign.

Twenty-six years ago a group of black clergymen placed an advertisement in the New York Times. It caused a trial for libel. The Supreme Court decided it on the basis of legal realism, i.e., who they liked better in the case, instead of on stare decisis. The result was a small lift for the civil rights movement, and a sweeping catastrophe for the legal rights of everyone outside the Inner Party of Mass Media.

Stein went on to hold out hope—this is thirty years ago now—that the Reagan-era Court might rethink this.

They didn’t. However, since 1987, the “Inner Party of Mass Media” has grown much less powerful, thanks to the “disintermediation” effect of the Internet, and people like the writers (and readers) of VDARE.com

They lie, we can tell the truth, and (right now) we can be heard—but only with your support.

James Fulford [Email him] has been a writer and editor for VDARE.com since 2001.