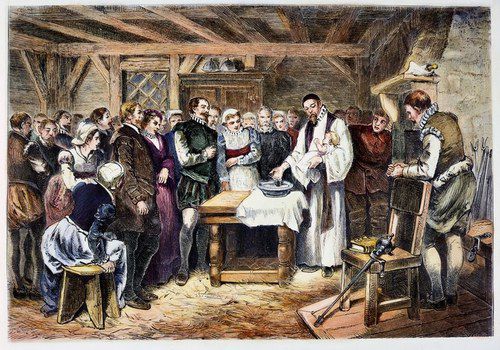 Virginia Dare was the first white child of English parentage born in America. She was born on August 18, 1587 On August 18, 1590, her grandfather returned America by ship to find that she, and everyone in the colony, vanished without a trace. 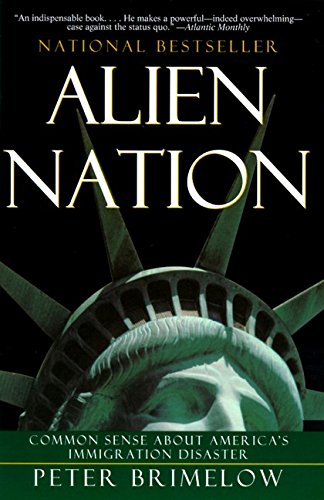 It's a story that, along with such things as the Pilgrim Fathers and Valley Forge, used to be known to every American schoolchild. As Peter Brimelow wrote in one of our founding documents, Why VDARE.COM / The White Doe?

"Today, Virginia Dare seems to be vanishing from American education too. But she was a fixture for earlier generations. Even Franklin D. Roosevelt felt free to give a speech commemorating the 350th anniversary of her birth. At one point, I planned to pay homage by bestowing her name on the heroine of a projected fictional concluding chapter in Alien Nation, about the flight of the last white family in Los Angeles. It seemed . . . symmetrical.

This statement made it into the Southern Poverty Law Center's report on VDARE.com, which they titled Keeping America White. (They seem to feel that whiteness is a bad thing. Of course, if whiteness were the point, we would be Snorri.com. But probably the SPLC doesn't like Englishness either).

Virginia Dare and her family were part of a "white minority". It's likeliest that what happened was that they were all killed by hostile Indians committing anti-immigrant violence. But there's a chance (and a legend) that some of the children, including Virginia Dare, were kidnapped rather than killed, and absorbed in to the tribe.

Tamar Jacoby once wrote that "Virginia Dare is thought to have eventually married into a local Indian tribe, or to have been killed by it—almost equally unfortunate possibilities [Emphasis added] in the minds of VDARE[.COM]'s writers."

I replied that I didn't think, like John Wayne in The Searchers, that Virginia Dare would be better dead, but that "yes, it would be unpleasant to be kidnapped from a massacred colony, and forced to marry into an Indian tribe." 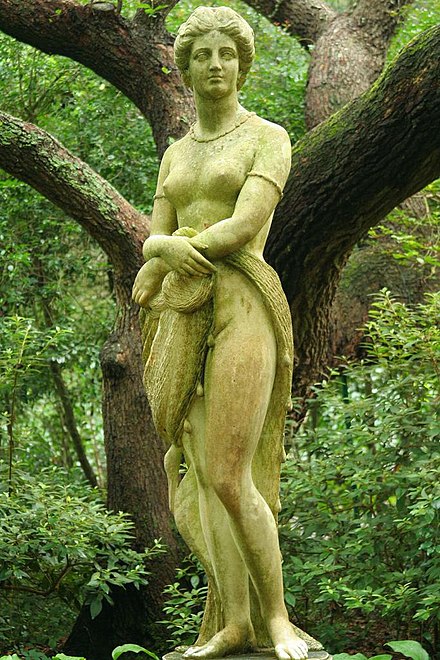 There's a statue in the Elizabethan Gardens in North Carolina that depicts 19th Century sculptress Maria Louise Lander's conception of what Virginia Dare might have looked like as an adult.

It's beautiful statue, but it represents her as young woman, naked to the waist and wearing beads [Picture]. That would be "assimilation."

There's a Lost Colony DNA project testing descendants of Indians in North Carolina to see if any of them are related to the Dare family in England, or the other families lost in 1587. But they haven't come up with anything yet.

Still, the fact that Virginia Dare as the first white child in America became a victim because the settlers in the Lost Colony were a minority—which in this case means outnumbered—relates to the "coming white minority" demographic in America.

Being a member of a white minority is something that you are Not Supposed To Worry About. That's what Dave Weigel [Email him]at Reason Magazine thinks, [The Origin of the Specious, May 29, 2007] and it's a common thing for the SPLC to criticize Americans for worrying about. Media Matters disapproves of Peter Brimelow for saying that as "As immigration policy drives whites into a minority, [Jared Taylor's] type of interest-group 'white nationalism' will inexorably increase."

"But what's wrong with being in a minority?" you may ask. I could reply that African Americans don't seem to enjoy it. (And if we're not supposed to complain, could they stop?) Nor do whites in Zimbabwe.

But it's simple enough to see in recent American history how a town, a city, ,or a school that used to be majority white, changes when it reaches a "tipping point" and becomes "majority-minority."

This has happened to a lot of American cities and towns with the internal migration of African-Americans:

Steve Sailer: "My late father-in-law was a classical musician, a union organizer and strike leader, and a Democrat. He owned a house in an all-white neighborhood on the West Side of Chicago that was so crime-free that his first grade daughter walked to her school a mile away. Then, blacks began moving in. Committed to integration, my father-in-law joined a liberal Catholic neighborhood group organized to prevent white flight. In 1968, however, his young children were physically attacked three times on the street and, following Martin Luther King's assassination, rioters looted all the shops in the neighborhood.

"So he sold his house for a crushing $18,000 loss. Being a big man who never did anything in a small way, he moved his family to an abandoned farm 63 miles outside Chicago, where they lived without indoor plumbing for their first two years.

"And he started voting Republican.

John Derbyshire: "In the next county to mine there is one of those black towns (not the one we stopped at when house-hunting). It has been in a state of chronic crisis for years. Latest news is that the town school system has been taken over by the state, to save it from complete collapse. The town's main drag is seedy: check-cashing places, liquor stores, dirty shebeens, and a lot of boarded-up windows. Easy to see why, as our regional newspaper reports, there is effectively no commercial tax base. Crime is high. Away from the center, parts of the town aren't bad. There are carefully-kept homes, neat gardens, well-dressed people driving SUVs. I wouldn't want to live there, though. A write-up by a black reporter in today's edition of that newspaper notes that the town was only 20 percent black in 1957. Now the figure is 87 percent. The reporter blames the town's problems on 'institutional racism.'"

The town, (Derbyshire didn't name it, but this is the Age Of Google, so I figured it out) is Roosevelt, Long Island.

One memorable thing Stern said about this:

"I was beginning to get the — beat out of me every day by the welfare recipients who are moving into my neighborhood . . . By the time I hit seventh grade there were only a handful of white kids left in the school. That's when the beatings began to get regular."[Newsday.com]

So if you hear that Howard Stern is being accused of making racist remarks, remember that it stems from his childhood as persecuted minority, and is thus OK.

When he was fifteen, his parents relented and moved to the much whiter Rockville Center. Stern said the experience changed him:

"I couldn't adjust at all. I was totally lost in a white community. I felt like Tarzan when they got him out of Africa and brought him back to England."

Virginia Dare might have felt like that, if she'd ever been rescued. There are a lot of cases like that, but they mostly don't make the papers.

One exception—a young woman named Rebecca Porcaro won $40,000 in a lawsuit against a Seattle school for discrimination against her as a minority:

"The insults and threats started practically the day Rebecca Porcaro walked into Rainier Beach High School in 1995: 'White slut. Stupid white girl. White bitch, go back to Bellevue. This is our school.'

"The problem soon escalated to a daily gantlet of merciless harassment both inside and outside class, the 1999 graduate said yesterday. She said she faced constant threats of violence; humiliating and lewd propositions; and insults from fellow students, most aimed at her race." [White woman settles school reverse-bias suit, By Rebekah Denn, Seattle Post-Intelligencer, August 14, 2001]

We've also written about what happens when whole towns are taken over by Mexican immigrants. Bryanna Bevens did a column on Maywood, California, which used to be an American town, and now…isn't.[ Report From Occupied America: Maywood, CA—Small Town USA To Illegal Sanctuary City…In Just Three Decades!]

Or for a similar case, this one: South Gate: Mexico Comes to California By Roger D. McGrath, The American Conservative, May 19, 2003.

Mass immigration is trying to do this to the whole country. And when they achieve it, America will be more or less gone.

And the story that began with Virginia Dare will have ended.

(Nick Gillespie, editor at Reason magazine, doesn't get it.)

(Steve Sailer explains what Hollywood did to Pocahontas; and to the colonists who would be the heroes of the movie if Hollywood weren't so PC.)

The Virginia Dare food company's explanation of why they picked her: Virginia Dare, A Legendary Symbol Of Purity

Fort Raleigh National Historic Site: this is where FDR saw the play, The Lost Colony, still performed there every year.

The Lost Colony": A Cure for Depression? (The National Park service's take on its play)

A statue of Virginia Dare, in the Elizabethan Gardens on the North Carolina Coast.

Marcus Epstein atop a fortunate coincidence. 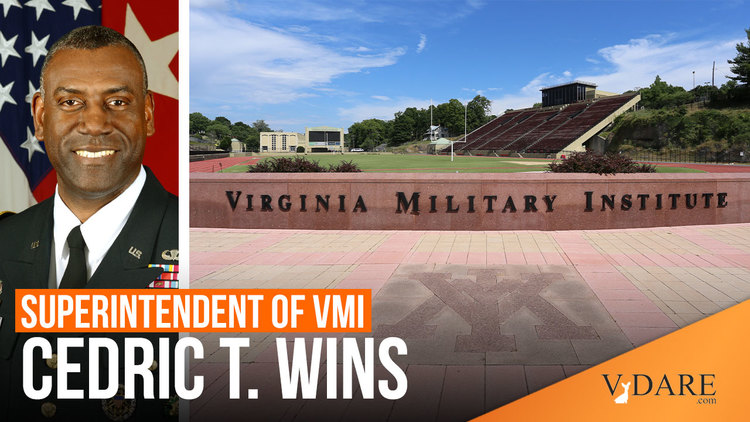