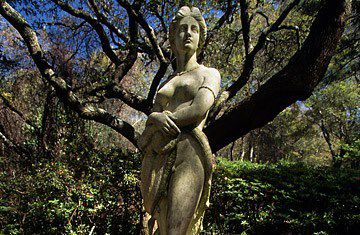 The Fulford File, By James Fulford | Virginia Dare's Birthday And The New Colonizers

Virginia Dare, after whom this webzine is named, was born on this date, August 18th, in 1587, the first English child born in the New World. Her date of death is unknown, since she, and the whole Roanoke colony, went missing, presumed massacred or enslaved, by local Indians.

Every American school kid once knew who Virginia Dare was. But this year, except for a couple of Today In History posts, the only thing I could find in the news that mentions Virginia Dare was Dare to do the impossible, By Richard Olivastro,[Email him] The Daily Caller, August 18, 2010.

"For centuries following our country's founding 235 years ago, America has been freedom's beacon.

"The Statue of Liberty has long symbolized our welcoming shores. Many popular patriotic songs recognize and celebrate this reality.

"One that comes to mind is 'They're Coming to America".

"How does the opening line in the Neil Diamond song go?

"'On the boats… and on the planes… they're coming to America.'

"Yes, 'They're coming to America.'

"Long before the Declaration of Independence, 'they came' to the New World primarily for religious freedom.

"She was the first child of English parents born in North America.

"Virginia was the daughter of Ananias and Elenor Dare, members of Sir Walter Raleigh's ill-fated colony that settled Roanoke Island on the North Carolina coast. (Yes, in case you're wondering, the cookie cake company still bears her name.)

"Today, a statue of Virginia Dare stands on the Outer Banks of North Carolina honoring her and all those who came to our shores seeking freedom." [Links added by VDARE.com]

Now there are several things wrong with that.  He doesn't mention what happened to the colony. But the main thing is that the Roanoke Colony and the settlement of Virginia, like the settlement of the West, were not what we now call "immigration".

There was this mostly empty country, populated by heathen savages, and the English came to settle there, whether the natives liked it or not. (Descendants of the Indians  will claim in court that they owned the land. The formulation I prefer is that they didn't own it—ownership of land being a civilized invention—they were just wandering around on the top of it.)

It's supposed to be different today. America is, as Ernest Van Den Haag wrote in 1965, (!) a "settled territory"—full of American, and not open for colonization. Americans are in a position to decide for themselves whether they want to be a colony of Mexico and/or the world.

Virginia Dare represents the beginning of what we call the "historical American nation"—a beginning largely forgotten today. Peter Brimelow wrote when he started this site that

"Today, Virginia Dare seems to be vanishing from American education too. But she was a fixture for earlier generations. Even Franklin D. Roosevelt felt free to give a speech commemorating the 350th anniversary of her birth. At one point, I planned to pay homage by bestowing her name on the heroine of a projected fictional concluding chapter in Alien Nation, about the flight of the last white family in Los Angeles. It seemed . . . symmetrical.

Stuff like Olivastro's Ellis Island cheerleading is what we hear from the kind of people who say "America isn't a nation like the other nations—it's an idea." But, once again, they have it wrong—America is more than an idea, it is a nation, with traditions and a political culture that go back to 1587.

On this anniversary, let's remember that.

(Nick Gillespie, editor at Reason magazine, doesn't get it.)

(Steve Sailer explains what Hollywood did to Pocahontas; and to the colonists who would be the heroes of the movie if Hollywood weren't so PC.)

The Virginia Dare food company's explanation of why they picked her: Virginia Dare, A Legendary Symbol Of Purity

Fort Raleigh National Historic Site: this is where FDR saw the play, The Lost Colony, still performed there every year.

The Lost Colony": A Cure for Depression? (The National Park service's take on its play)

A statue of Virginia Dare, in the Elizabethan Gardens on the North Carolina Coast.

Marcus Epstein atop a fortunate coincidence.