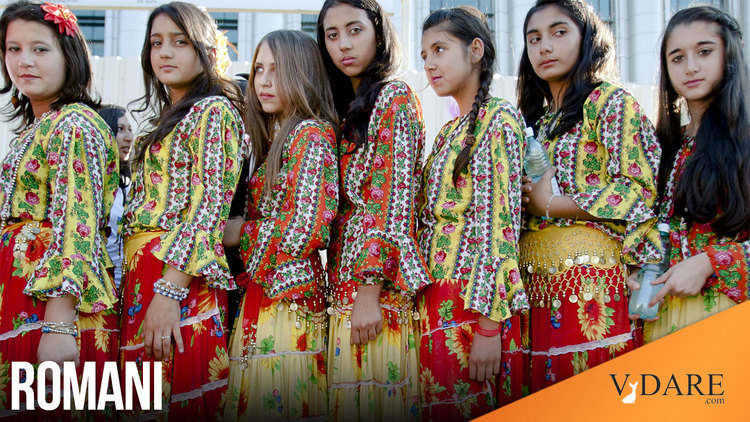 The Fulford File, By James Fulford | The Refugee Industry, Slavery, And Rape

Girl: Mom sold me to be 'wife', By Patrick Flanigan [email him], Rochester Democrat and Chronicle, May 27, 2004

"A Monroe County grand jury is about to hear the story of a Rochester teenager who says her mother sold her for $3,000 to another family that forced her to do household chores and have sex with a 21-year-old man.

"In statements included in court documents, the 15-year-old girl said her mother ordered her to live with the family every weekend for almost a year.

"Under threat of severe beatings, the girl said, she was made to clean up after the family and to live as one man's bride. She described the man as the son and the brother of other family members.

"The girl said her experience with the other family began in May 2003, when her father said they were going to visit a family from their native country in eastern Europe.

"'I do not know too many people from my country, so I was excited to go,' the girl wrote in a statement to Police Investigator Ron Reinstein.

"At the house, though, the girl said a man raped her in an upstairs bedroom.

"Moments later, the girl said her mother stormed into the room and demanded to know what happened. The girl said she was still bleeding when her mother took her home and beat her 'like it was my fault.'

"The next weekend, the girl said her mother took her back to the house. When she arrived, the girl said, the mother of the man who had raped her 'welcomed me to the family.'

"That night, she said, she was forced to sleep in the man's bed, where she was raped again.

"'I asked him why he was making me have sex with him and he told me he had to pay my mom $3,000 for me to be his bride." The girl said she went home and asked her mother what the man had meant.

"She began to stutter," the girl wrote. "After that, every Friday after school she made me go to [the man's family's] house. I asked her why I had to go and she told me because I was his wife"…

"According to the girl's statement, Lapjani's family is from Albania. The Democrat and Chronicle reported last year that the family members are refugees from Kosovo, a Serbian province bordering Albania and home to many ethnic Albanians.

"A boy who answered the door at Lapjani's house referred telephone calls to David Gerhardt, pastor of Trinity Emanuel Lutheran Church in Gates, whom the boy identified as the family's sponsor. [JF: my emphasis] He said neither Lapjani nor his mother spoke English."

This brings to mind three questions:

The answer to the first two questions is the same: Albanian Gypsies. The word Gypsy doesn't usually appear in American press reports of this kind, but that's who it was. Bekim Lapjani and his family are Gypsies, although they are nowadays referred to as Roma. Gypsies around the world practice arranged marriage by bride price, with teenage marriage being the norm.

The answer to the third question—how did these people get to the United States?—is, surprisingly enough: Lutherans!

Recently Sam Francis said that "The Protestant churches are the Open Borders Lobby at prayer—though a good many churches seem to spend more time preaching politics than praying."

This Rochester church apparently decided to act on this.

"…we looked for another way in 2002 to glorify God's name, this time by reaching across the ocean.  Through the course of several introductory meetings with representatives of the Catholic Family Center (CFC), we learned about the plight of many refugee families suffering persecution.   In response we formed a team of people who were willing to help one of these families relocate to Rochester. Finally, on September 28, 2002 eight weary travelers arrived to our outstretched arms at Rochester airport, the Lapjani family:

Fatime is the mother and she is 39.

Nasmija is only other daughter and she is 16.

Nesim is the next eldest son and he is 14.

Nermin is the youngest son and he turned 9 on 4/3.

This family of eight people is of ROMA (or gypsy) descent.

The father of the family got sick, and received about a million dollars worth of medical care, after which he passed away anyhow. The congregation made sure that the house—where the alleged rape took place—was completely furnished by donations. The website continues:

"This outreach effort by TELC has already created interest in the community [JF note: Positive interest; this was before the rape and slavery accusations] as news coverage appeared on Channel 13, FOX and the Democrat and Chronicle. One reporter asked TELC's Resettlement Team Co-chairperson Chris Lynch why our church would reach out to a family from a completely different culture. She replied, 'The love of God is in our hearts.'"

Which is fine, but if the love of God could work its way up to your brain, you want to ask yourself, before reaching out to a family from a completely different culture, the following question: "How is this culture different?"

The Lapjani family are (a) Gypsies, and (b) Muslims, and (c) Albanians.

That means that they have pretty predictable attitudes towards women's rights, other people's property, and America itself.

Why can't the Refugee Industry figure this out?