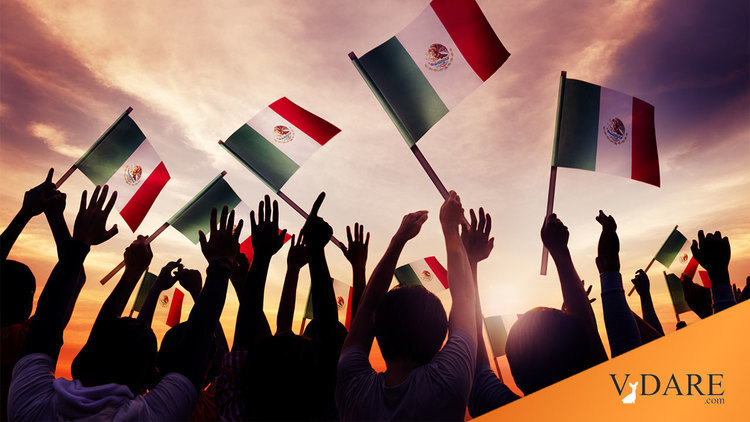 President Bush has already celebrated Cinco De Mayo this year at the White House. [RealVideo]. He had to skip this ceremony in 2003, but announced that it wasn't meant to be a deliberate snub of Mexico, which had just pulled out of its 45-year old mutual defense treaty with the United States on the grounds that it didn't want to participate in any actual, well, defense. Our Allan Wall commented"

"It's bizarre when you think about it. The Bush/Rove administration feels obligated to apologize for not publicly celebrating a Mexican holiday!

"How many times has Vicente Fox celebrated the Fourth of July in Los Pinos- the Mexican White House?

"He could if he wanted to. Why not invite a delegation of some of us Americans who live in Mexico? (I could be invited—my wife voted for Fox!) The program could include some American music and folk dances. Then Fox could gush a little about how American expatriates have enriched the culture of Mexico. I'm not holding my breath …" [Memo From Mexico: Cinco De Mayo Means Freedom From Foreigners. Why Don't We try That In The U.S.?]

But as Allan Wall pointed out, May Day is a public holiday in Mexico— where they like socialism.

In fact, they've given it a new twist. Instead of taking from Mexico's rich to give to Mexico's poor, they take from the Americans to give to the Mexicans.

As an example, one of the other public holidays this month is May 18, the Dia de la Expropriacion Petrolera—the anniversary of the Nationalization of the Petroleum Industry  in 1938.

This was the biggest armed robbery of the twentieth century. It left all the oil in Mexico in the hands of corrupt Mexican governments, who couldn't even get most of it out of the ground; a lot of it is just sitting there, because they won't allow foreigners to touch it. And this is a public holiday?

Peter Brimelow recently pointed to an analysis of what Cinco De Mayo, and the Mexican National Anthem stand for, by Mark In Mexico.

I wrote about the bloodthirsty Mexican National Anthem, Mexicanos Al Grito De Guerra, in 2002,emphasizing their unwillingness to let foreigners  "profane Mexican ground" by setting foot in Mexico—Mark In Mexico insists on pointing out that Mexico has never won a war "much less a fair fight."

Here's a roundup of what VDARE.COM writers have said on previous Cinco De Mayos:

And here's a friendly wish I put in the blog last year at this time:

A Happy Cinco de Mayo…to the citizens of the Estados Unidos de Mexico, who are still in Mexico. And also to those of their compadres who are legal residents of the United States. As for the rest of you, i.e. the large Mexican illegal population, wouldn't this be a good time to return home to celebrate your national holiday? They miss you. Most Americans wouldn't.