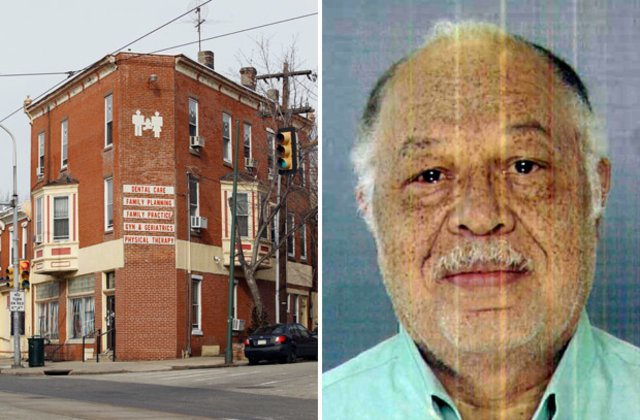 Both Mark Steyn and Michelle Malkin have done columns on Dr. Kermit Gosnell [pictured right] and the abortion mill he was running in the Philadelphia ghetto. What happened to the babies is horrible and disgraceful, and what happened to the mothers (including women who did not want an abortion) is really horrible, too.

Mark Steyn quotes some details about the latter. This was an abortionist who didn't believe in a woman's right to choose:

"FIFTEEN-YEAR-OLD Robyn Reid didn't want an abortion. But when her grandmother forcibly took her to an abortion clinic one wintry day in 1998, Reid figured she'd just tell the doctor her wishes and then sneak away.

"Instead, Kermit Gosnell barked: 'I don't have time for this!' He then ripped off her clothes, spanked her, wrestled her onto a dirty surgical stretcher, tied her flailing arms and legs down and pumped sedatives into her until she quit screaming and lost consciousness, she told the Daily News yesterday...

"In 2001, Davida Johnson changed her mind about aborting her 6-month fetus after seeing Gosnell's dazed, bloodied patients in his recovery room, she said. But in the treatment room, Gosnell's staffers ignored her protests, smacked her, tied her arms down and sedated her into unconsciousness, she said. She awoke no longer pregnant. [Victims say abortion doctor scarred them for life, By Dana DiFilippo, phillynews.com, January 21, 2011]

Steyn's post talks about the role of big government in this tragedy (his post is called Big Government's Back Alley).  He recently did the same thing in some comments about Detroit, which didn't mention the color of the majority of the inhabitants at all.(Listen to audio courtesy of Media Matters—Mark Steyn: A "Liberal Bomb" Is Responsible For "Rubble Of Detroit")

Michelle Malkin is talking about abortion in general (which she's been covering for years) and this case in particular: The Philadelphia Abortion Horror: How Mass Murder Gets a Pass.

She says that Gosnell "preyed on poor, minority pregnant women and their live, viable babies". Similarly, Steyn says that, after the celebrity abortion enthusiasts go home,

"the blessings of this 'right' fall disproportionately on all the identity groups the upscale liberals profess to care about—poor women, black women, Hispanic women, undocumented women, and other denizens of Big Government's back alley."

But neither Steyn nor Malkin—both of whom have fought long and hard against Political Correctness—mentions that Dr. Gosnell is an African-American.

FiveFeetofFury.com's Kathy Shaidle is the one who has to say of the Main Stream Media's relative silence:

"I say it's because the doctor is black.

There are two problems with Gosnell's abortion mill—criminality and incompetence. And both of them have some relation to race.

Incompetence is partly this, from the Grand Jury report, quoted by Steyn:

"Furniture and blankets were stained with blood. Instruments were not properly sterilized. Disposable medical supplies were not disposed of; they were reused, over and over again. Medical equipment – such as the defibrillator, the EKG, the pulse oximeter, the blood pressure cuff – was generally broken; even when it worked, it wasn't used. The emergency exit was padlocked shut. And scattered throughout, in cabinets, in the basement, in a freezer, in jars and bags and plastic jugs, were fetal remains. It was a baby charnel house."[PDF]

But it's more than that. It's also Gosnell's personal incompetence. You see, the problem seems to be that Dr. Gosnell, although in possession of an actual medical degree, from an actual medical school, couldn't perform a partial-birth abortion.

The idea of a late-term abortion is to kill the baby (or fetus if you prefer) inside the mother's womb, and extract the remains—in pieces, if necessary.

It's done that way for legal reasons. If a fetus actually leaves the womb alive, it's not a fetus, it's a baby, under the protection of the Born-Alive Infants Protection Act. And what woman who actually wants an abortion wants is for that baby to be dead.

She also wants to avoid labor, which can easily take 24 hours. I presume many of the women who went to the clinic voluntarily assumed that abortion would be safer and less painful than delivering the baby.

That late-term surgical procedure is something that requires a good surgeon, sterile instruments, careful anesthesia, and, in case something goes wrong, more surgeons and life-support down the hall.

All of that is what Gosnell didn't have—his clinic sounds like something you'd find in Haiti or Africa. And remember, the main thing he didn't have was the surgical skill—he couldn't do the procedure.

What he could do, however, was induce labor and deliver babies. Anyone can do that. I could do it myself. It's easy. (Yes, I know that women have always had to do the hard part.) Big cities teach taxi drivers the basics of delivering babies, and it's part of the education of Special Forces medics, who helped deliver babies in Vietnam under field conditions.

Dr. Gosnell would deliver these babies alive, and then kill them—with scissors—because that's all he knew how to do.

What does this have to do with race? Well, there's the disparity in crime rates between African-Americans and whites. It's sometimes thought that if we can just "fix the schools",and cause all minorities to be educated, it will cause a drop in crime.

Possibly. But it might also mean different types of crime.

Of course it's not just Frist. I mention him because he should have known better. This is the goal of all kinds of people, especially those running medical schools.  (See also Affirmative Action, Immigration, Curing America Of White Doctors.)

The point is that if politicians do succeed in creating more minority doctors regardless of standards, more cases like this are likely to be the result.

But no one will know—because the MSM won't tell.